The Daily Nexus
Volleyball
Gauchos On the Cusp of First Big West Win
October 15, 2015 at 5:00 am by Sean White

The UCSB women’s volleyball team’s current losing streak of 11 matches is the longest winless phase in the three-year coaching tenure of Head Coach Nicole Lantagne Welch in Santa Barbara. While one of the essential sportsmanship rules is to never underestimate your opponent, the odds of the Gauchos winning their first conference match of the season is a plausible prediction. 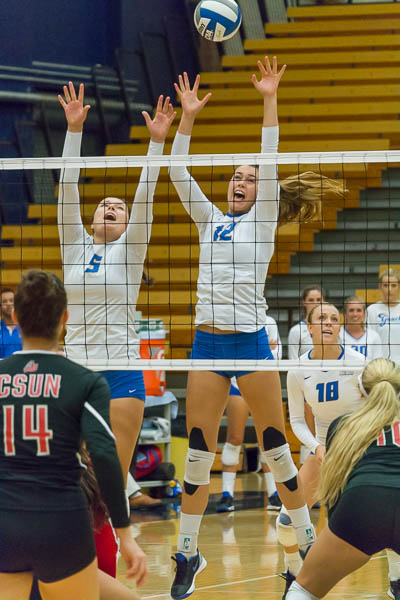 “We keep stressing the process of getting better,” Lantagne Welch said. “We played so much better on Saturday, we have so much to grow from. If we play again like we played against Cal Poly on Saturday, I expect to have some good results. That’s what’s important, to keep improving, and then they’re going to see the results come.”

Santa Barbara will host UC Riverside on Oct. 16 and Cal State Fullerton on Saturday. The Gauchos are currently 4-12, 0-5 in Big West play and in search of their first home victory of the season. Ranking one spot above UCSB in the conference standings is UC Riverside. The Highlanders enter the Thunderdome at 6-12, 1-4 in Big West play, and are on a four-match losing skid that has seen them get swept in their last three matches. In dire need of a win is Cal State Fullerton. The Titans are 0-16, 0-4 in conference and are on a 19-match losing streak dating back to the end of last season.

In spite of UCSB’s troubles this season, inscribing her name among the best liberos in the Big West is freshman Emilia Petrachi. She ranks second in the Big West with an average of 4.38 digs per set and fifth in total digs with 228. The possibility of a Gauchos’ win is extremely convincing to Petrachi, who believes UCSB still has a chance to contend in the Big West.

“We’re really confident, considering the past weekend’s games,” Petrachi said. “We played really good, we didn’t win but they were a tough team. I think that we can beat every team in the conference, especially the two that are coming this weekend.”

Dating back to 2008, UC Riverside has continuously plummeted, finishing last in the Big West for nearly the past eight consecutive years. The 2014 season was one of its worst outings in program history. For the third time, last in 2006 and 2010, UC Riverside ended its season with zero conference wins and a 22-match losing streak that eventually came to an end in UCR’s 2015 season opener against Weber State.

Despite having four players on their team with 125-plus kills this season, the Highlanders’ multitude of errors has prevented their high-powered offensive attack. UCR ranks second in the Big West in total errors with 382, which has contributed to the Highlanders having the second-worst hitting average at .170.

However, along with UCR’s arsenal of hitters, the Highlanders’ junior libero Maddie Hubbell is currently having the best season of her collegiate career. The defensive specialist’s total of 315 digs and average of 4.77 digs per set lead the Big West. Prior to the start of the Big West schedule, UCR ranked third in digs per set with an average of 15.09.
Since the start of conference play, the Highlanders sustain their third-place ranking with 15.1 digs per set. Hubbell is also a one-time Big West Defensive Player of the Week recipient after recording a career-high 32 digs in a match against Nevada earlier this season, and is responsible for 15 of UCR’s second-best conference total of 90 service aces.

As one of four seniors on the UCSB roster, opposite Jaylen Villanueva has developed under the guidance of Welch. It has been a frustrating stretch for the Gauchos, but the veteran player has learned to help the team, specifically its younger talent, maintain its composure throughout its arduous stretch of matches.

“We honestly tell them to play with all of their heart,” Villanueva said. “To constantly keep fighting because volleyball is the type of sport in which it can go either way, if someone’s off or if someone’s on. We just have to keep fighting no matter what.”

Last season was the first time the Titans didn’t register double digit wins since 2003. Nov. 15, 2014 is the infamous date of Fullerton’s last victory. Despite the drawbacks of this season, freshman outside hitter Kyra Smith has shined on the defensive side of the net. She leads the Titans in total blocks with 53 and since the start of conference play, Fullerton ranks third in blocks per set with a 1.7 average.

The anticipation of UCSB earning its first conference victory is inevitable as this weekend provides the Gauchos with their best opportunity to do so.

“We just need to play like how we practice,” Petrachi said. “Sometimes we go frantic on the court and we’re not loose enough. We’re always there, but we never close and make a win. This is a great opportunity to get that win.”
UCSB faces off against UC Riverside Oct. 16 at 7 p.m. and will take on Cal State Fullerton at 7 p.m. on Saturday in its return to the Thunderdome.

A version of this article appeared on page 14 of October 15, 2015’s print edition of the Daily Nexus.