The Daily Nexus
News
UCSB Hosts Ecosocialism Conference in Girvetz
October 12, 2015 at 5:00 am by Christopher Chen 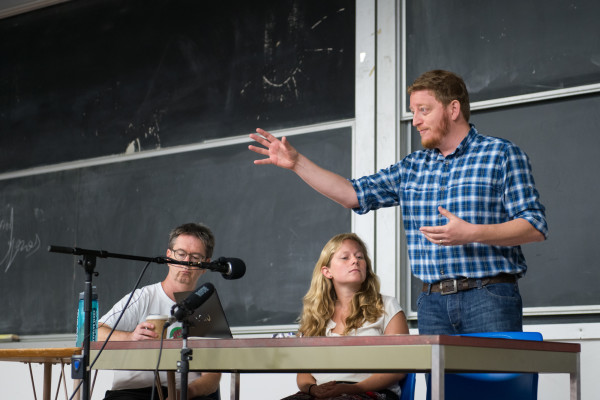 SCNCC is a coalition of ecosocialists from the U.S. and Canada who believe a move away from capitalism is necessary to combat climate change. According to SCNCC, climate change is especially a threat to the poor, women, people of color and those who live in the Global South. After an initial introduction on Friday night, the conference held various workshops, plenary sessions and activities to encourage sharing ideas that challenge the current system. Over 20 workshops were held throughout the weekend, each offering a slightly different perspective on the various issues of poverty, environment and human rights.
Organizer and UCSB professor of sociology John Foran said a graduate student in his sociology class, Earth in Crisis, inspired him to join SCNCC. According to Foran, climate change is a result of capitalism and requires a better, more extensive solution.

“I learned about [SCNCC] and I thought this was more or less what I think about the climate crisis — that it needs a deep systemic solution, a radical solution,” Foran said. “The climate crisis cannot be solved within the logic of capitalism or globalization as we know it — it’s too big and caused by the normal operation of those systems.”

Green Party presidential candidate Jill Stein addressed the audience through Skype, and said there needs to be a “comprehensive solution for a comprehensive problem” that solves issues of climate change as well as social inequality.

“We need solutions that address jobs that address climate, that address racial justice,” Stein said. “Ecology is pitted against our economy and our jobs and this is a false divide, so it’s very important we put out solutions that meet it and that we take on the economic crisis at the same time as the environment.”
According to Stein, there should be increased financial aid for students who struggle to pay for higher education.

“About two-thirds of all college students, both current and former, are in disabling debt because their jobs do not provide enough to pay back that debt,” Stein said. “We are not only calling for free public higher education but also to abolish student debt. It is critical to bail out of students to liberate our younger generation to be the leaders that they must be.”

“This is the reality of international capitalism,” Sawant said. “This is the product of the gigantic casino of speculation created by those highway robbers on Wall Street and the rapacious oil vultures. In this system, the market is God and everything is sacrificed on the altar of profit.”

Foran said the title of the conference combines the need for social equality and to preserve the environment to form the term “ecosocialism.”

“Socialism, translated into what it means in my heart, means trying to create a more equal society,” Foran said. “It means fighting against the gross inequality that exists in the world today. Ecosocialism brings in the climate crisis part … By 21st-century ecosocialism, we mean a new kind of ecosocialism that is explicitly and deeply democratic. It’s a way of saying we don’t think there’s enough democracy in the world today.”

According to Foran, the conference cultivates interest in those who are just discovering the movement and connects them with long-time activists.

“This conference brings together our undergrads, who are starting to have a little interest in the climate crisis, with people who are up and down the coast of all generations, who are seasoned ecosocialists,” Foran said. “Out of these chance encounters grow relationships and new knowledge and new passion.”