The Daily Nexus
UC News
Avi Oved Moves Forward Initiative To Increase Student Representation on UC Board of Regents
October 12, 2015 at 5:00 am by Naomi Stolpner 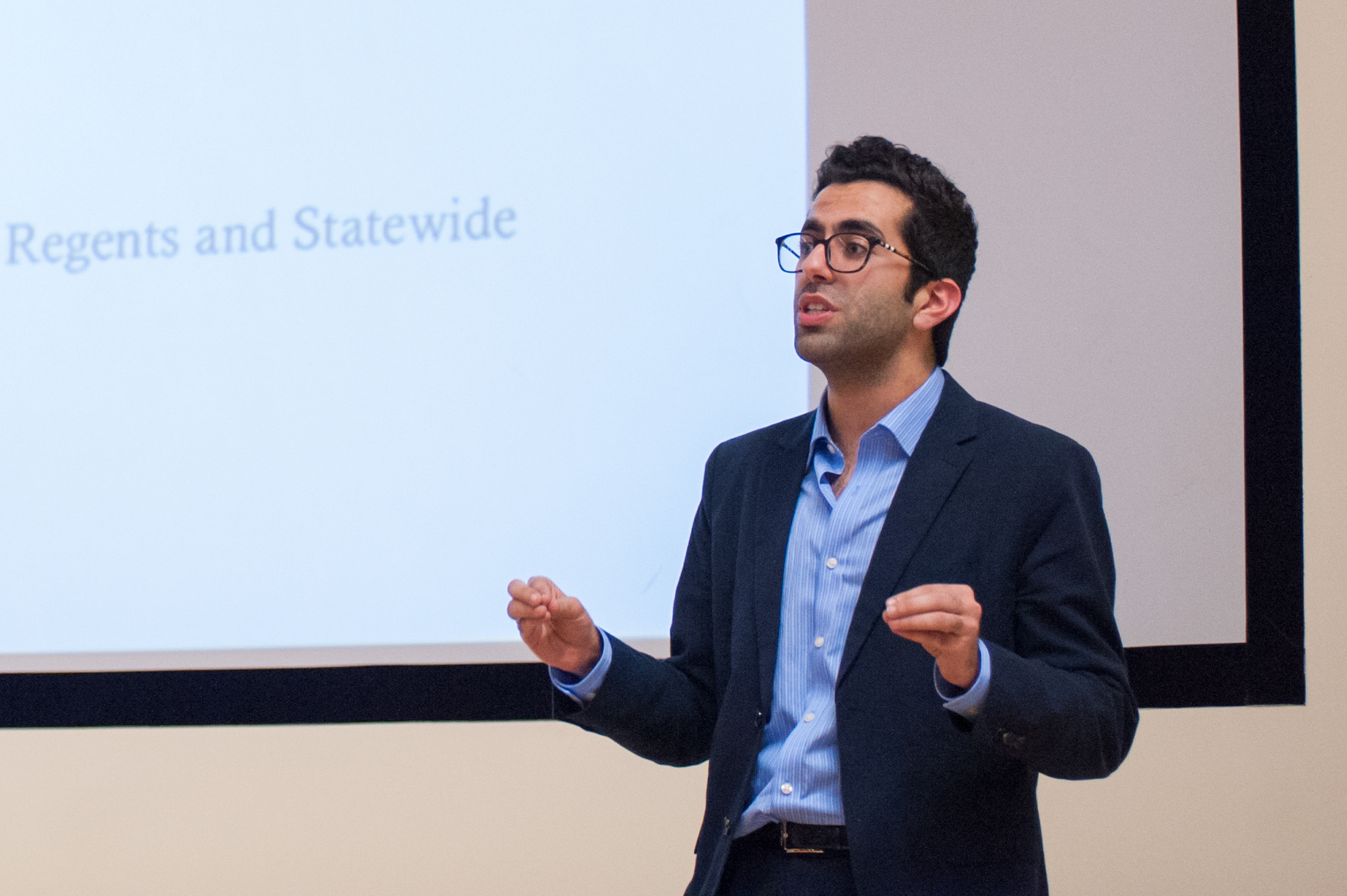 University of California Student Regent Abraham “Avi” Oved has been working with students and organizations across the UC to add a Student Regent Adviser position as part of his Shared Governance Initiative.

Oved’s initiative aims to increase student representation on the UC Board of Regents through an appointed position, which would belong to a student from a different level of education than the elected student regent. Currently, Oved, an undergraduate student at UCLA, holds the only voting Student Regent position for the 2015-2016 term. UC Riverside graduate student Marcela Ramirez serves as the Student Regent-designate, a non-voting position, and will be the 2016-2017 Student Regent. If Oved successfully establishes the adviser position, he hopes to ultimately secure a new Student Regent voting position on the Board of Regents.

According to Oved, UC students suffer a “lack of representation” on the Board of Regents, and he hopes to combat this underrepresentation with the new student position.

“The UC Regents govern the University and unfortunately seem to be very out of touch with the issues facing students when making decisions that affect their lives,” Mirza said in an email.

According to Oved, past student Regents have pushed for another voting student board member and have not been successful. Oved said by first creating the adviser position, the Initiative will provide a foundation for the later establishment of a voting position.

“It was really important for me to lay a framework and groundwork so we can really carry on the momentum that’s built every single year,” Oved said. “That’s why we crafted the Shared Governance Initiative, which is a multi-prong approach to increasing shared governance at the UC.”

Last year, Oved served as the Student Regent-designate with Student Regent Sadia Saifuddin, a UC Berkeley undergraduate at the time. Oved said having two undergraduates representing all UC students was problematic when trying to address challenges unique to graduate and professional students.

Oved said student governments on individual UC campuses change every year, and one goal of the initiative is to create a long-term plan that will keep momentum going for a new Student Regent position.

“What we’re looking to do is try to defeat the leadership turnover and [ensure] that we have a long term plan that will make us effective at accomplishing,” Oved said.

According to UCSB Graduate Student Association External Vice President and UCSA Board Vice-Chair Yanira Rivas Pineda, the Regents often do not address issues pertaining to graduate students, a problem Oved’s Initiative could remedy.

“Two years ago I remember talking with Avi about how important it is to have graduate students’ voices represented because our needs oftentimes go unheard,” Pineda said in an email. “Having two student Regents will ensure that we have more student representation and hopefully have an undergraduate and graduate representative.”

According to Oved, tuition and financial aid policy discussions among the Board of Regents are often focused on undergraduates, but graduate and professional students face fee increases as well.

“We don’t have as robust of a financial aid policy for our professional students as we do for undergrad students,” Oved said.

According to Pineda, the most recent UC budget deal raises Professional Degree Supplemental Tuition for many professional students.

“Many of us are no longer have access to traditional financial aid packages, like Cal grants, Federal grants, and subsidized student loans,” Pineda said in an email. “Many of us have families that we need to provide for as well and those of us who took out private student loans as undergrads are actually paying student loans while we’re in schools.”

Oved said adding a new student adviser position will create change regarding problems that graduates and undergraduates both face, such as diversity, food security and tuition.

“The Student Regent position has the access to key admin., to the Regents, to critical information and data that is otherwise not open to the general public,” Oved said. “They have ability to sustain long-term relationships and navigate the bureaucracy of the UC to really contribute meaningful change.”

According to Pineda, graduate and professional students need UC-level representation to address challenges pertaining to issues such as mental health and financial stability.

“A recent well-being report from UC Berkeley revealed that 47% of its PhDs and 37% of Master’s/Professional students score as depressed, so we know that mental health is an issue as well, on top of more specific graduate needs like student-advisor relationships, massive student loans and job security when we finish our program,” Pineda said in an email.

According to Oved, the UC Council of Presidents, both graduate and undergraduate, UCSA and Student Regent-designate Marcela Ramirez support the Initiative.

“We’re starting to see a domino effect because now individual associations are passing resolutions in support of this item,” Oved said.

Despite support from student organizations, Oved said he has faced opposition from the Board of Regents.

“We are opposed because we have a fundamental disagreement about having more students at the table,” Oved said. “Some people use the excuse of not having enough space on the board. Some people say they don’t want to dilute the voting student Regent. Some people just disagree with the effect it will have on the board.”

Despite opposition, Oved said he will keep working to implement the Initiative.

“It’s my job now, with the collective effort of the students, to inform [the Regents] that this is no longer a question of whether we should do it or not,” Oved said. “It’s when we should do it.”