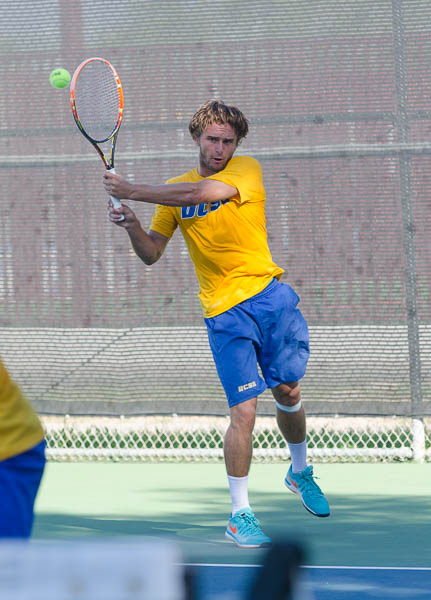 Playing in a singles match against his own teammate, Teague Hamilton hits the ball over the net. Christina DeMarzo/Daily Nexus

This past weekend the UCSB Men’s Tennis team hosted the UCSB Classic, a preseason individual tournament consisting of both singles and doubles play. When the tournament came to a close, five Gauchos stood in championship position.

“The team looks really great so far and it’s still very early in the season,” senior Andrew Riminton said. “This is the first tournament of the year and I already can’t wait for the season.”

Although Riminton speaks highly of his team, he as an individual was a bright spot for the Gauchos in the weekend’s events as he competed in Flight B for the tournament. After taking a victory in his first match Friday by straight sets of 6-4, 6-1, the senior looked to keep the momentum in the second day of the tournament with two more matches ahead.

Riminton would face a tough opponent in Ethan Young-Smith from the University of Oregon. The Gaucho veteran got out to a quick lead taking the first set 6-3, but Young-Smith would retaliate and take the second set 6-2. To keep the championship run alive, Riminton battled in the third and grinded out a 6-4 victory to push to the next round. Just hours after his quarter-final victory Riminton coasted to the finals beating Pacific’s Bernardo Oliveira 6-2, 6-4. A familiar foe would await him in the Championship round.

Having swept all of his opponents in the first three rounds, senior Nathan Eshmade would look to take the trophy from his teammate Riminton.

“It’s always fun to go up against one of your own teammates since you know them so well, you know all their moves and you can pick on each other’s weaknesses,” Riminton said. “And of course [Eshmade] and I are the two Auzzies on the team so we knew it would be a fun matchup.”

Riminton jumped out early and grabbed the first set 6-1, leaving him just six games away from the Flight B Championship, but Eshmade would not go down easily. In the second, the two Gauchos battled hard trading off games until the score sat at 6-5 in Riminton’s favor. Despite having multiple match points, Riminton could not seal the deal as Eshmade’s resilience challenged his teammate to take the second set. Riminton eventually blew one by his fellow Gaucho to take the second set 7-6 and the overall victory. Eshmade would be awarded second place in the tournament to give UCSB the top two spots.

In the other flights, the Gauchos proved to be successful as well. The Flight A Consolation Championship was taken by Santa Barbara’s freshman Nicolas Moreno de Alboran, who lost his first singles match, but then took two straight victories of 7-6, 6-3 and 6-1, 6-1 to head to the final. The first-year Gaucho would leave his first collegiate tournament with a title in hand, defeating Oregon’s Simon Stevens in the last round 6-2, 3-6, 6-4.

Flight C was dominated by the Gauchos on both ends. Senior Miles Seemann took a first round loss and proceeded to win three straight and take the Consolation Championship over Trey Strobel 6-1, 6-2. Freshman Anders Holm took the other side of the draw and swept his way to the Championship, only losing one set along the way. He defeated Jamie Thorp of LMU 6-2, 6-4 to give UCSB yet another title on the weekend.

With the first tournament behind them, the UCSB Men’s Tennis team will forward to Regionals this week.