The Daily Nexus
News
Doreen Farr Talks to Community About I.V. Self Governance, I.V. Community Center
October 9, 2015 at 12:34 am by Jacob Little 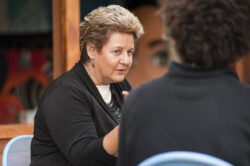 Discussion focused on Assemblymember Das Williams’ I.V. Self-Governance Bill (AB 3), which Governor Jerry Brown signed into law on Wednesday, and funding for and I.V. Community Center. AB 3 aims to make I.V. a Community Services District (CSD) governed by a board of local representatives and supported by a Utility Users Tax (UUT).

Farr said it will be a “big job” to educate I.V. residents about how a CSD would affect them before they vote to approve it in the 2016 election.

“Sometimes people get voter fatigue; they’ve got this enormous ballot, all this stuff to go through so hopefully [AB 3] doesn’t get lost in that,” Farr said.

Farr said she has heard concerns regarding funding for CSD administrative costs and services, and the role Isla Vista Recreation and Park District (IVRPD) would play in a CSD.

Farr said a UUT, which taxes residents a portion of their utility bills, is a more effective method of dividing the costs of the CSD between students, long-time residents and property owners.

“That was why they wanted the UUT rather than a property tax because the thought was that the tax burden is spread more evenly throughout the community that benefits, and not just on those people that own property,” said Farr. “Long-term owners are concerned that they are going to be saddled with enormous tax assessments.”

According to Farr, IVRPD was intentionally excluded from the CSD planning.

“The I.V. Park and Rec District did not want to be folded into the CSD and that was why we thought the governor might not sign it, because he doesn’t like creating layers,” Farr said. “So it was specifically written to exclude IVRPD … we’ve got a good thing going, we don’t want to goof it up.”

Professor of economics Lanny Ebenstein said he has plans to raise funds for an Isla Vista Community Center that involve alumni and current students.

According to Ebenstein, significant funds are still needed to build a community center.