The Daily Nexus
Sports
Two of Big West’s Best Face Off at Harder Stadium
October 8, 2015 at 5:02 am by Elliot Thornton

After a 3-0 shutout against the University of Hawaii last Thursday, the UCSB women’s soccer team (8-3-1, 1-0) shifts gears and encounters its second conference challenge this Sunday against Long Beach State (6-3-3, 1-0). Coming off a 1-0 victory against arguably the top team in the conference in Cal State Fullerton, this match will be essential for the Gauchos to prove they are a side to be reckoned with in the Big West.

Last week’s matchup against the Rainbow Wahine was everything UCSB needed to start its conference play on a good note. Following a stagnant first half that featured one shot on goal, Santa Barbara tallied the first score of the game in the 72nd minute as sophomore forward Amanda Ball earned a penalty kick that she took herself, launching it into the back of the net. This was Ball’s first official goal of the season after missing the Gauchos’ previous eight matches due to injury.

After Ball’s score, it didn’t take long for UCSB to follow up with another as freshman forward Jessica Parque drove down the left line and sank a shot past Wahine junior goalkeeper Monk Berger, extending her team’s lead to 2-0. A goal in the 86th minute by other freshman forward Mallory Hromatko wrapped things up for the Gauchos, handing them their first conference win of the season with a final score of 3-0. 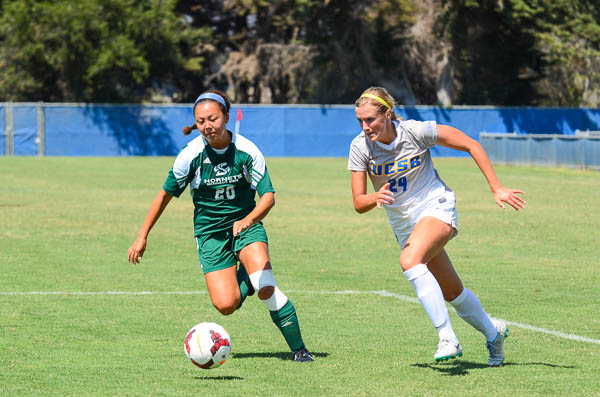 Running towards the goal, Mallory Hromatko makes a move for the ball. Christina DeMarzo/Daily Nexus

Thursday’s victory sends UCSB to eight wins out of its last nine contests, an impressive start to its early season. Currently on a three-game winning streak, Santa Barbara moves on to play a talented and well coached Long Beach State team.

With two of the conference’s most reputable head coaches in UCSB’s Paul Stumpf and Long Beach State’s Mauricio Ingrassia, Sunday’s matchup will be a rewarding matchup highlighting two well recognized programs and their strategic ways of winning.

“[Long Beach] plays a system that matches up very well with what we want to do,” Stumpf said. “But [Ingrassia] is a very intelligent person so if we start dominating the match they will be prepared with a plan B.”

The last time these two teams faced off on Oct. 5, the 49ers cruised to a 2-0 victory at George Allen Field. Look for Long Beach to try and put sophomore forward Ashley Gonzalez in scoring position once again.

The former Big West Freshman of the Year currently ranks seventh in conference this year with five goals. Gonzalez also scored the go-ahead-goal in the 82nd minute last October versus UCSB, leading Long Beach to a win.

The 49ers have had their share of success in non-conference play this year stealing two crucial wins, one at DePaul and another hosting UCLA.

“Long Beach has two huge wins this year [against UCLA and DePaul],” Stumpf said. “So they’re a confident crew and it should lead to a great game.”