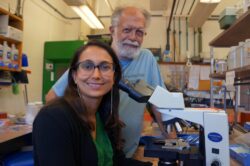 Alejandra Jaramillo (bottom) made the discovery during her ongoing research on parasites in the lab of Armand Kuris.

You may see Armand Kuris, parasitologist and professor in the Ecology, Evolution, and Marine Biology department, wearing a new T-shirt, which has a picture of the new discovered fish parasite, Chloromyxum kurisi. Team members of Kuris Lab honored Kuris by naming the parasite, which infects fish bladders, after him for his contributions to the fields of Parasitology and Ecology throughout his career.

Kuris Lab focuses on understanding the roles of parasites in the ecosystem. UCSB Ecologist and team member of Kuris Lab, Kevin Lafferty, explained that it was actually his student, Alejandra Jaramillo, who found this parasite in the Carpinteria Salt Marsh; it, reportedly, did not look like anything reported in literature. Jaramillo then teamed up with biologists from Oregon State University, to further identify and confirm that this was indeed the discovery of a brand new species.

At this point in the study, there is not an enormous amount known about this species or what kind of impact it has on its host or environment. The parasite shares ancestors with the larger organisms, jellyfish and sea anemones, which eventually evolved to become smaller, highly specialized organisms. Kuris stated that C. kurisi probably does not do a lot of damage and although the parasite seems to affect a fair number of fish, a fish that is infected would not necessarily look any different physically on the outside.

“As far as how the parasite affects the fish host, we don’t think it does a lot of damage. And for its importance with the whole functioning of the ecosystem at Carpenteria, probably not very. It’s there, it’s fairly common, and it’s in a reasonably common fish,” Kuris said. 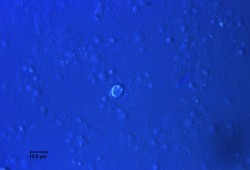 A microscope image shows Chloromyxum kurisi, a parasite that measures ten micrometers in infects the bladders of topsmelt fish.

The researchers are using knowledge from other parasites within the group C. kurisi belongs to in order to accurately explain it. It is suspected that C. kurisi uses two hosts in order to complete its lifecycle.

“We suspect that is has two hosts because in this group of parasites all the life cycles that have been well-studied have two hosts, so we assume this is like the others,” Kuris said.

Lafferty explained that many fish have just not been tested for parasites before.

“Only 12% of fishes have ever been looked at for parasite that leaves a lot of fish to look at. And that’s just fish; this applies to other types of animals,” Lafferty said.

Lafferty says that the biggest interest now is to understand the role that parasites in general play in the ecosystem. At this point, they can say that “parasites are everywhere and can be important, but in a stealthy, hidden way.”

Thus, Kuris elaborated, a second incredibly exciting aspect scientifically is that this discovery helps highlight that there are many, many other undiscovered parasite species out there. In concurrence, Lafferty acknowledged that this discovery shows that “we still don’t know much about the natural world.” This fact allows our imaginations to wander to think of the many other undiscovered species in this world.

“There are a lot of undiscovered species. One of the coolest things about UCSB, it is the only campus that is right next to the marine environment. Seawater runs in half a dozen buildings on campus. When you take a course, like Invertebrate Biology, we go looking for the little things that live in the sand grains. Every student in that class is seeing species that no one has ever seen before,” Kuris said. “It is amazing how many unknown things there are when you go to habitats where people don’t spend a lot of time. This is true for parasites. Even common marine animals haven’t been examined for parasites.”

A version of this story appeared on p. 18 of the Thursday, Oct. 8 print edition of the Daily Nexus.