This weekend, the No. 54 UCSB Men’s Tennis team will open up its season hosting the fourth annual UCSB Classic. This tournament will take place Friday to Sunday and will consist of individual athletes competing in both singles and doubles play. 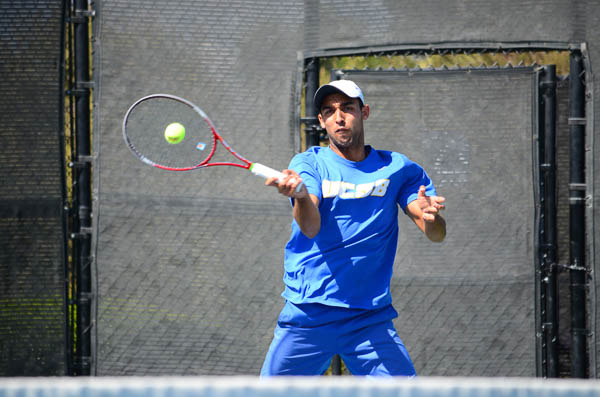 Although the team’s season does not officially start until January, the Gauchos look to prepare for the road ahead when they play against some of the top talents of other California programs.

In attendance for this tournament will be players from UCLA, Cal, LMU, Pacific, Fresno State, UC Davis and Oregon. This will be the first preseason tournament for most schools in attendance.

Along with the visitors, the entire Santa Barbara team is expected to compete in the weekend’s events. This will be the first time that the Gauchos will introduce their No. 15 ranked recruiting class of 2015.

“Although we are a very young team, the freshman have been quite impressive so far,” sophomore Cody Rakela said. “I feel like we’re going to carry some positive momentum from the tournaments over the summer into the SB Classic.”

These incoming freshman will be joining an already deep roster for this Gaucho team that currently stands as defending Big West Tournament Champions. Along with their conference success from last year, the Gauchos also ran the table in the 2014 UCSB Classic, where the team took titles in all different flights.

In the A flight, consisting of players that usually hold the No. 1 and No. 2 spots for their respective teams, three Gauchos placed top-10 in a pool of 16. Junior co-captain Teague Hamilton took 10th in the classic as he nearly won the consolation championship. The other captain for Santa Barbara, junior Morgan Mays, took home sixth place last year and graduated senior Tobias Galskov put on the best performance for the Gauchos taking third.

Last year’s B flight was dominated by sophomore Cody Rakela, who was just seeing his first matches as an NCAA player. Despite the lack of experience, Rakela walked to the final and defeated his opponent in two sets to take the gold.

“I loved playing in this event last year, using the crowd to my advantage,” Rakela said. “I am feeling very good coming into this first tournament of the fall season.”

He was only forced to play to three sets in his first match and then proceeded to sweep every other player in two. Junior Erik Johnsson finished just behind Rakela, taking third place in Flight B.

The tournament was finished off in Flight D, where senior Andrew Riminton took first place, only losing seven sets along the way.

The Gauchos will look to match and improve on their stellar performance from last year’s classic, especially in welcoming in a great recruiting class of young talent to Santa Barbara. The UCSB Classic will start Friday morning with doubles matches.