The Daily Nexus
Sports
Second Half Surge Powers UCSB in Big West Opener
October 5, 2015 at 5:07 am by Elliot Thornton 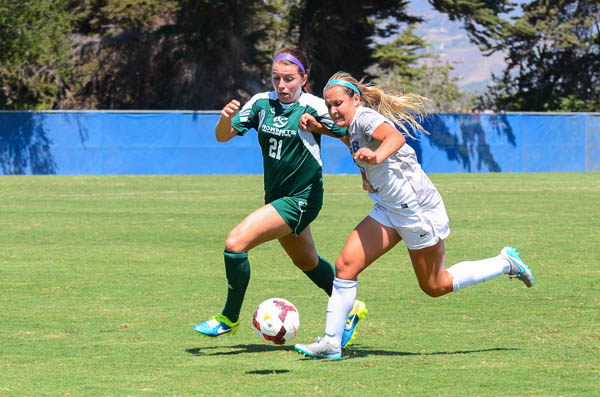 While the UCSB women’s soccer team managed to pull away with a 3-0 win on Thursday, it wasn’t all smooth sailing for the team against Hawaii.

Santa Barbara is now 8-3-1 overall and 1-0 in conference after its conference-opening victory. The loss drops the Rainbow Wahine to 3-7-1 overall and 0-1 in Big West play.

Both teams remained scoreless for the majority of the match, but a late score by sophomore forward Amanda Ball sparked UCSB’s scoring spree and helped lead to its 3-0 victory. Ball’s first goal of the season couldn’t have come at a more crucial time — she last played on Aug. 28 versus San Jose State before missing eight games due to injury.

The Gauchos controlled possession early, but a solid Rainbow Wahine defense remained consistent through the first half, limiting the Gauchos to just three shots and one shot on goal. UCSB’s best scoring chance came in the match’s 10th minute as freshman forward Mallory Hromatko placed a good-looking header into the goal box but had it snagged from being a point by Hawaii’s junior goal keeper Monk Berger.

After being shut out by Hawaii in the game’s first 45 minutes, Santa Barbara finally had its chance in the second half after a Hawaii penalty that led to Ball’s penalty kick. Wasting no time, Ball stepped into her spot and drilled the ball right into the back of the net for a score in the 71st minute.

“This was Amanda’s first game back since three games in,” Head Coach Paul Stumpf said. “We didn’t say anything [after the foul] — she stepped right up to the line and just put it in. It was a well-earned kick.”

The Gauchos possessed control of the match from that point on as freshman forward Jessica Parque led an attack down the left line and pooched a kick right past a diving Berger. Parque’s goal was set up on a nice dish from junior midfielder Sara Feder, extending the team’s lead to 2-0. It was Parque’s first goal since the Gauchos’ win against Sac State on Sept. 6.

Hromatko also recorded a goal of her own late in the 86th minute, accepting a pass from freshman defender Ryan Kokoska down the line and scoring to seal the match 3-0. Hromatko has registered a team-high six goals this season, scoring or assisting on a goal in nine of UCSB’s last 10 matches.

“[Hawaii] was dominant the first 15 minutes of the second half,” Stumpf said. “We weathered that storm and slowly got our foot back on the ball. [Our girls] stuck to our game plan, turned the tide back, and dominated the last 20 minutes of play.”

Furthermore, the Gauchos’ offense was not their only source of success. Junior goalkeeper Jacq Caginia set the tone defensively for her team, recording five  total saves for the match, four of them coming in the second half.

“[Cate’s] individual defending and composure on the ball in tough times has been a big part of the defending for us this year,” Stumpf said. “She’s only a junior so we have her for another year…and she is really good in the air.”

Caginia has started in six of the Gauchos’ last nine games, her first being in their 2-0 home victory over Texas. Santa Barbara has pulled away with a win in five of the six matches she has started, proving she is a reliable protector of UCSB’s goalpost.

UCSB’s next match will be at home against Long Beach State on Sunday, Oct. 11. Kick off will be at noon at Meredith Field at Harder Stadium.