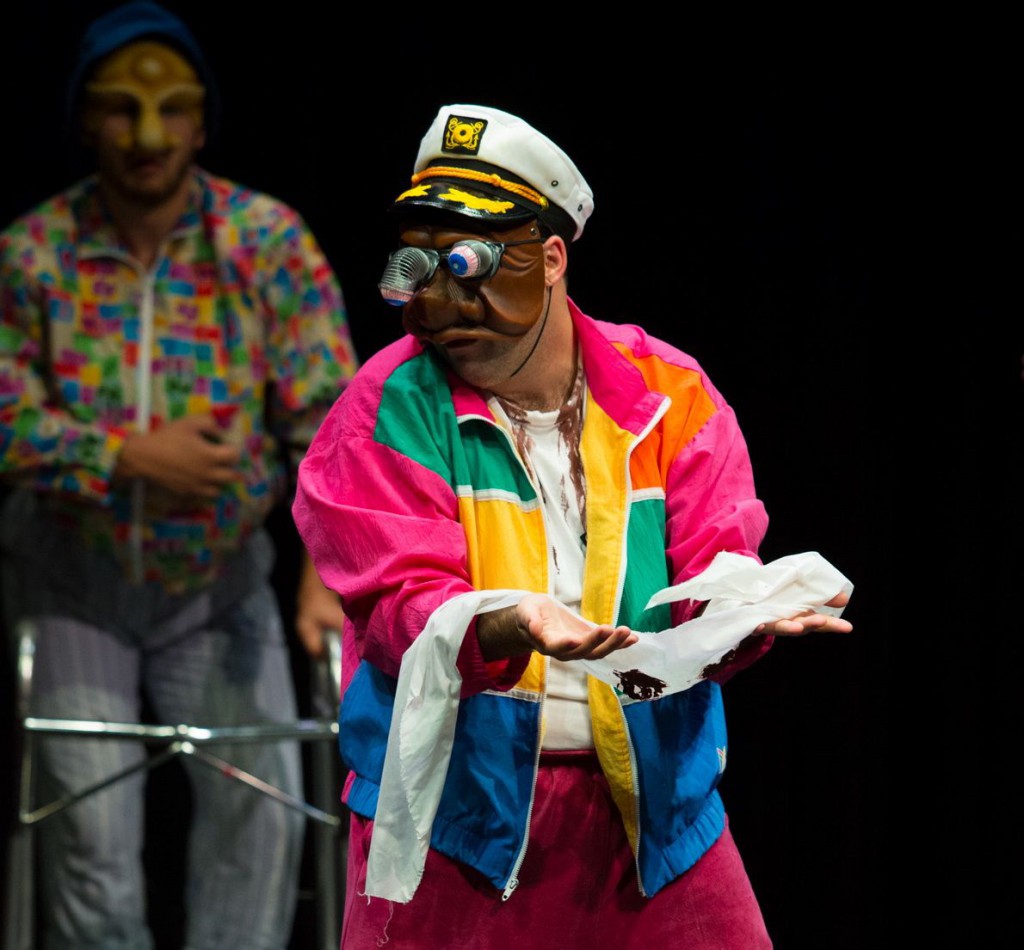 An excited and chattery crowd collected in Anisq’Oyo’ Park Saturday night for the opening show of Shakespeare in the Park’s version of Oedipus — Commedia dell’Arte style. Junior BFA actress, Maddie Martin, performed as Dr. Torre and the Dentist in this performance. Along with her fellow cast members, Martin spent the past several weeks mastering this theatrical style, which was developed during the Italian Renaissance. “Commedia is about having physical stock characters that are identifiable no matter where you go,” Martin explained. “It’s about having big expressions, big plots and [using] big gestures so that everyone can understand what’s happening.”

This style of acting was originally intended for traveling theatrical troupes, who often found themselves performing in towns with a different language than their own. In order to be successful, these performers developed Commedia dell’Arte to breathe life into their stories for any audience. Every actor was outfitted with a mask for the entirety of the show, each one particular to a specific Commedia character. For a thorough explanation of the masks and stock characters of Commedia dell’Arte, visit: http://shane-arts.com/commedia-stock-characters.htm

Eddie Pez Rex was written and directed by Gerry Hansen, and is the sixth summer Commedia production at UCSB. Hansen is Shakespeare in the Park’s Artistic Director, and she works with UCSB’s Department of Theater and Dance as well as its College of Creative Studies. Her ability to bring out the ridiculous in her students is proven by the amount of repeat cast members featured in this show. Jesse Waddell performed as Lear in last year’s Capt’n Lea, a Commedia take on King Lear, and returned to take on the role of Kreoff; many of his Capt’n Lear cast-mates likewise made reappearances in Eddie Pez Rex.

Musical numbers such as Weird Al Yank’s Eat It and Lets Chill by Hannah Montana served as fun and slightly #tbt 2000’s pre-show music. The glowing pink clouds added to the fanciful scene, and with the cast’s entrance to The Candy Man, a lighthearted mood was set for the evening of toothaches, “Egads!”, and borderline inappropriate use of props.

Lacking in the usual array of stage equipment, the cast of Eddie Pez Rex nonetheless had no trouble making themselves heard over the sounds of Isla Vista’s wild inhabitants. Plagued by the Great Itch, people of the candy-themed town of Treats looked to their Candy King, Eddie Pez Rex, for salvation. Over the course of an hour Eddie Pez Rex, performed by senior BFA actor Tyler X Koontz, undergoes a wild adventure of self-discovery and unexpected fulfillment of prophecies, accompanied by endless puns and even dance numbers.

Third-year UCSB student Mary Forbes, a double major in sociology and dance, found the dances to be just the right mix of funky and informative: “I thought [the dance numbers] were amazingly choreographed … and you could tell [the performers] had dance experience, but it looked so natural … it really put you in the place of the play.” In particular, simple but effective choreography was used to enhance a heart-breaking moment: the one when Queen Jojo realizes her husband is truly her son. Unsuccessful and overly eager attempts at kisses by Eddie Pez Rex and slow motion expressions of utter horror on the part of Queen Jojo depict the ultimate picture of a grotesque plot twist.

The cast’s dedication to the proper preservation of this art form takes no small amount of effort: the physical exertion required showed in the glistening faces of the actors as they took their final bow — maskless. Though park productions pose the potential danger of getting home with pants full of ants, Eddie Pez Rex was well worth the danger and provided its audience with a raucous night of laughter. There are many ways to spend an IV weekend night, and Shakespeare in the Park certainly ought to make a top-ten to-do list!