The Daily Nexus
Spoken Word and Poetry
Engineering a Poetry Club
October 1, 2015 at 5:00 am by Jason Chun 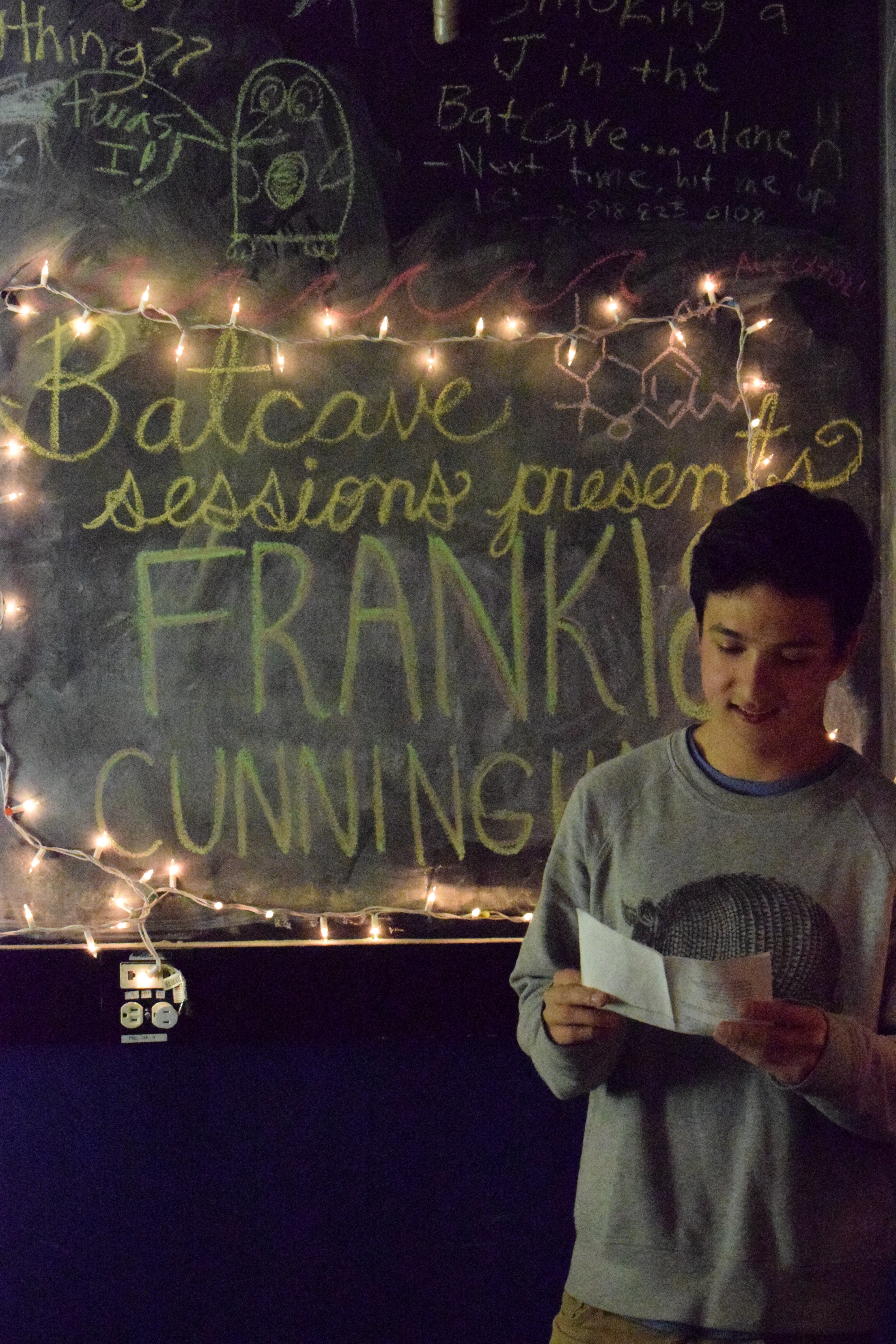 What does a poet look like — the beret-topped face half-hidden behind an obscure novel at Starbucks? Or the stuffy, thick-bearded professor in his book-lined study? Frankie Cunningham eludes both of these archetypes. Few would suspect the fourth-year chemical engineering student, in his sweatshirt and khakis, to be a self-proclaimed “Mad Scientist Poet.” As the founder of the campus’ Poets’ Club, he maintains an air of casualness in this creative space and welcomes wordsmiths of all backgrounds and experience levels.

The club has its origins in Poetics of Struggle, the workshop course created by visiting artist in residence, Daniel “Fritz” Silber-Baker. Cunningham credits the class as a key experience that drove him to write poetry. Upon his second enrollment in Fall 2014, he was asked himself the question, “What do you see yourself doing in the future?” His first thought was whether he would be writing poetry after Fritz’s class. When the answer came with hesitation, the Mad Scientist Poet knew he had to start a new version of Poetics of Struggle.

True to the name of the course, poetry is no simple focus for a discussion-based club. Cunningham found help from Fritz, as well as Professor Felice Blake, who contributed to the creation of Poetics of Struggle. The instructors provided crucial resources and inspiration for the club’s development. Initial enthusiasm among members of Poetics of Struggle and other poets gave Cunningham additional confidence to build the club in the following quarter.

The nature of both the club and class are rooted in participation. Its founder structured Poets’ Club to resemble Poetics of Struggle: a “safe, creative space” where virtually any topics can be posed for discussion. An integral aspect borrowed from the course is the check-in question, which opens every meeting. “What do you see yourself doing in the future?” “What is a conversation you’ve been meaning to have?” “What season are you feeling today?” These are just a few of the questions that Cunningham says leads to “profound thoughts” and “powerful conversations.” “It’s very open, it’s very vague, but it basically stimulates your mind, gets you to ask questions on an internally reflecting level.” Cunningham said. “You’d be surprised how many people are willing to open up to these simple questions.”

Other participants are crucial to this process of discovery. Oftentimes when one person lacks the right words, another has them written and ready. Cunningham sees poetry as an act of speaking both to the self and to others. “Everyone’s dealing with the same struggles, but in different contexts,” he says. He emphasizes the process of creating poetry as a sort of give and take, allowing one person to look deeper into him or herself while providing potential answers to another person’s issues.

So what compels a chemical engineering major to start a poetry club? When asked how he came to love poetry, Cunningham jokes, “Engineers are people too.” He relates that he came to UCSB as undeclared, contemplated becoming an English major, but changed his mind when he fell in love with science. “Science is what I want to do to contribute to society,” Cunningham said. “What I want to contribute to myself is through poetry.”

Cunningham first wrote poetry in high school and cites Charles Bukowski as one of his favorite poets. However, what really sparked his interest in poetry was his discovery of spoken word on YouTube. There was no particular spoken word performer or piece; even if one piece resonates with him, another by the same poet might not. It is the drive to find the pieces that “can create the sort of emotion you’ve never felt before,” which the Mad Scientist Poet finds thrilling and “quite addicting.” Oftentimes he shares his favorites with his club, in hopes of entertaining and inspiring others.

The Poets’ Club has big plans for the 2015-16 school year, starting with a video to display some of its creative output to the general public. Further down the line, the club authority is seeking to host public writing workshops and open mics. Cunningham wants to work on making the club more performance-oriented. Writers often focus on introspection, but the Mad Scientist Poet describes the act of performing a personal piece in front of an audience as “exhilarating.”

The club founder also hopes to see members grow closer. He believes that this goal will be achieved as participation becomes more natural and common. All the same, he will never discourage those who simply want to come to Poets’ Club to spectate.

The club looks forward to exciting projects but also potential struggles. While results so far are promising, Cunningham acknowledges the difficulty of reproducing the inviting environment of Fritz’s class. “I expected it,” he says. “I think the club is very much in the process of being created. We can’t be Poetics of Struggle anymore.”

The Poets’ Club meets on Thursdays from 7-9 p.m. For more details, email ucsbpoetsclub@gmail.com.

Note: The author is a member of Poets’ Club.