The Daily Nexus
Volleyball
Women’s Volleyball on Hunt for Upset in Conference Opener
September 24, 2015 at 5:01 am by Sean White 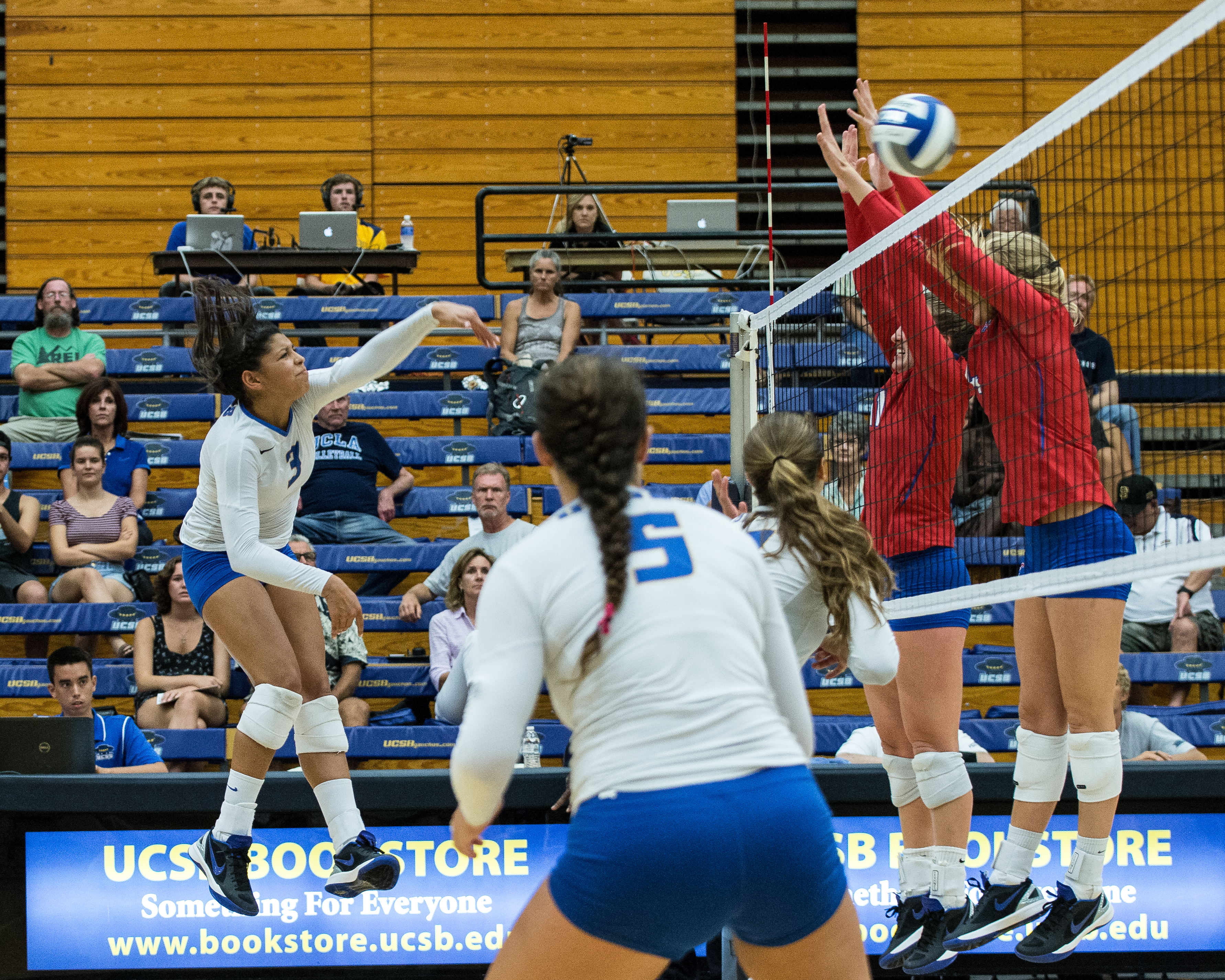 Jaylen Villanueva swings an outside hit around the SMU block into the deep corner.

The unpredictability of college sports is an element that cannot be found elsewhere. The rush of emotions that occur while watching an underdog triumphantly upset a top team is always an achievement that is remembered.

Friday, Oct. 11, 2013 is a date in UCSB women’s volleyball history that remains relevant. In her first year as Gaucho Head Coach Nicole Lantagne Welch helped lead Santa Barbara to a 3-2 upset victory over No. 5 Hawaii. This Friday is a pivotal opportunity for UCSB to recreate history in its Big West conference season opener against No. 11 Hawaii.

“We’re looking forward to the challenge, and obviously we need to progress this week in practice. We definitely need to get our confidence at a stronger, stable point to go into their place,” Lantagne Welch said. “There’s some eerily similar things to two years ago. We were struggling in the pre-conference and not doing so great, and we went over to the islands and upset them. We know that you gotta get out there and play the game and we’re excited to do that and it’s a great opportunity for us.”

Santa Barbara enters Stan Sheriff Center with a 4-7 overall record, and is set to face a Hawaii team that is in full stride and on pace for a special season. The Gauchos certainly have a challenging task ahead of them as they are 0-2 versus Top 25 opponents this season. The Rainbow Wahine are currently 10-1 overall, and are hoping to extend their five-game winning streak.

UCSB comes into its conference opener with a chip on its shoulder as it has yet to end its disheartening losing stretch of six games. Overcoming this frustrating streak will be no easy task as the Gauchos prepare to face one of the nation’s best players in Nikki Taylor.

While Taylor is having a standout year, Hawaii as a collective group has played spectacularly on the court. The Rainbow Wahine are flourishing in making their case as the Big West’s top team as they lead six of the conference’s seven statistical categories.

In order for UCSB to spoil Hawaii’s winning record, the Gauchos’ must maintain a consistent balance on both sides of the ball. They rank second in the conference in service aces per set at 1.41, are tied for first in solo blocks with 24, third with an average of 2.32 blocks per set and are second in the league with the least amount of errors at 198.

As long as Santa Barbara does not allow Hawaii to force it into playing against their strengths, the chances of UCSB upsetting the Rainbow Wahine become more realistic. The beginning of conference play presents the Gauchos with a great opportunity to disregard their early-season stumble with hopes of improvement.

“We’ve had a couple of rough games, but now with starting conference we get to travel to Hawaii and play a really great team. I think it’s a great time to show what we’ve got and have a new fresh start,” sophomore outside hitter Chanel Hoffman said. “We have to go into practice with the mentality that we’re going to get better every day because you can’t just keep saying it or you’ll never improve.”

Santa Barbara’s conference season-opener against No. 11 Hawaii will take place on the road this Friday, Sept. 25th at 10 p.m. PT, 7 p.m. HST.

A version of this article appeared on page 10 of September 24, 2015’s print edition of the Daily Nexus.