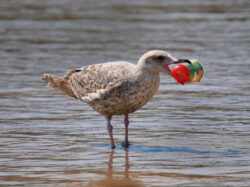 In Cornwall, United Kingdon, a young Herring Gull, one of the many seabirds affected by plastic waste in oceans, picks up debris

Plastic pollution has been an important global environmental concern for decades due to the rapid amount of plastic production and consumption. Until now, scientists have not been able to quantify the impact of plastic waste on the seabird population. A new study published in the Proceedings of the National Academy of Sciences (PNAS) estimates that about 90 percent of seabirds have consumed plastic. The disturbing percentage of birds that have eaten plastic is only expected to increase, reaching an alarming 99 percent by 2050.

The plastics include bags, bottle caps and synthetic cloth fibers, all of which wash up to the ocean from mismanagement of plastic disposal. There is so much plastic production that, while only a small percentage of all plastic waste actually ends up in the ocean, it still adds up to about 300,000 tons per year. In 2010 alone, 192 coastal countries discarded between 4.8 and 12.7 million metric tons of plastic into the ocean.

According to the study, the birds that are most affected are the diverse range of seabirds that reside on the coastlines of Southern Australia, South Africa and South America.

The amount of plastic that the seabirds are consuming varies. Researchers found that, while larger birds tend to eat larger amounts of plastic, the size of the bird does not necessarily indicate that it is more likely to eat plastic. Parakeet auklets, small birds that reside in Alaska, were found to have the highest likelihood of eating plastic. Seabirds mistake the plastics for food or even swallow them by accident, as is likely the case for albatrosses, who skim the surface of the water to catch seafood, and often catch plastic pieces that float on the surface. 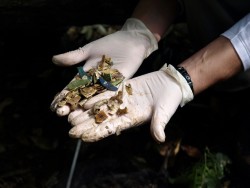 Shown here are the various types of plastics ingested by a flesh-footed shearwater, which weighed nearly 8 percent of the seabird’s overall weight.

While the health impacts on the birds have not been measured, increasing consumption is expected to lead to negative effects. As a bird consumes more and more plastic, there is less room for real food which then affects their overall health and body weight. If a piece of plastic is sharp enough, it can even puncture internal organs when consumed. Another possible health risk is the exposure to chemicals and toxic pollutants from the plastic.

Even though the seabirds face a distressing future, plastic production is still booming. In the article, “Nearly Every Seabird on Earth is Eating Plastic,” published by Laura Parker in National Geographic, lead author of the study Chris Wilcox says global plastic production doubles every 11 years, a statistic that is tracked with the seabirds’ ingestion of plastic.