The Daily Nexus
Volleyball
Gauchos Set to Co-Host Tournament With Cal Poly
September 17, 2015 at 5:02 am by Sean White 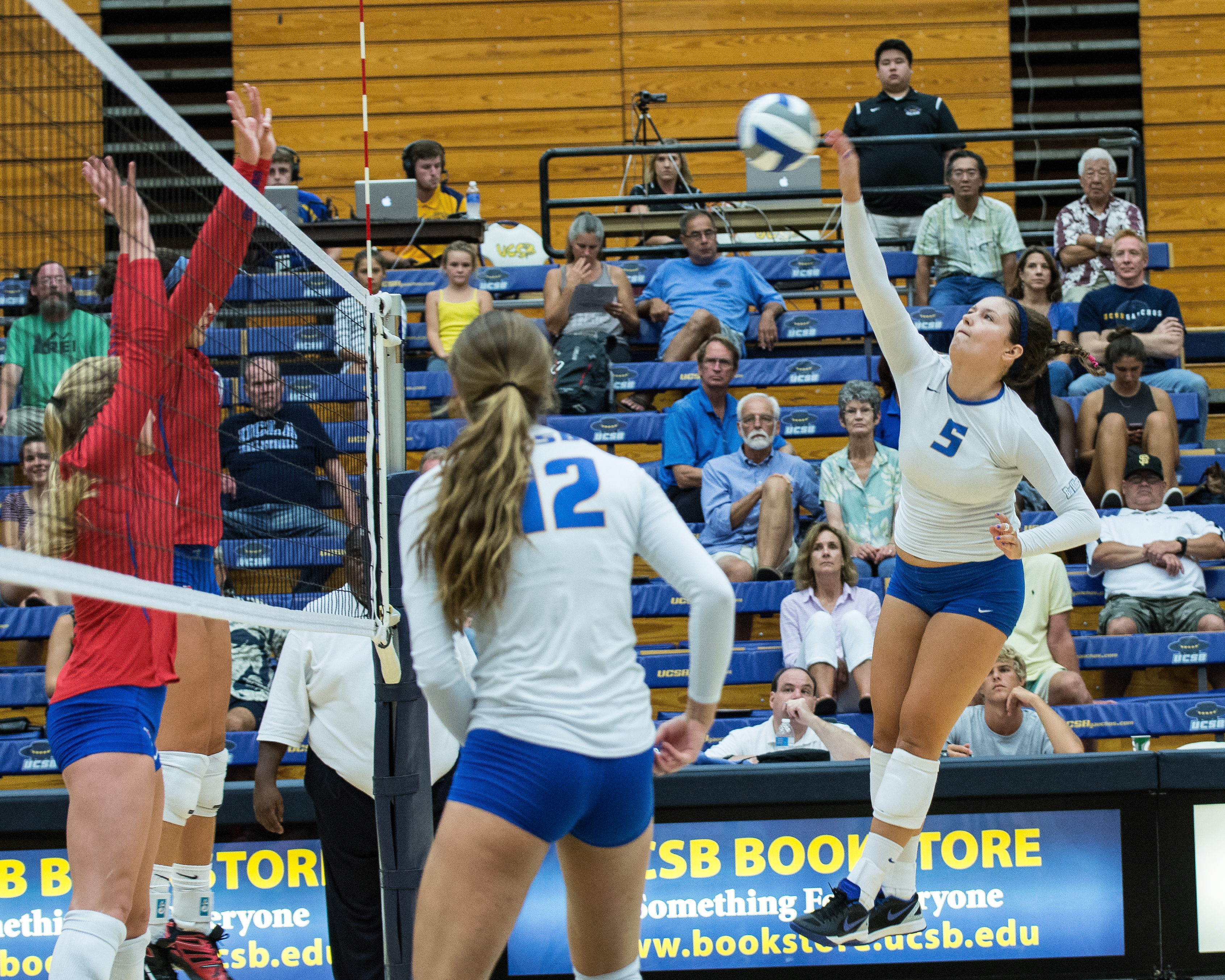 It has been an eventful season for the UCSB women’s volleyball team thus far. Through nine games, the Gauchos are 4-5 overall and are hoping to overcome their latest four-game losing skid.

In her third season, Head Coach Nicole Lantagne Welch is hoping to bounce back from a near average year in which UCSB finished 13-14 overall, 8-8 in conference.

Despite its current winless streak, UCSB is a team with much potential. The Gauchos entered this season with the 18th-best recruiting class in the nation and a third-place Big West preseason ranking. For a roster with only five seniors, this season has provided the Gauchos’ younger, developing talent with much playing time.

Attempting to fill the vacancy of former Gaucho setter Ali Spindt, freshman Annie Hasselmann has held her ground. Though still adapting to the collegiate level, Hasselmann has been productive on the court with a total of 157 assists and an average of 4.76 assists per set.

Helping ease the transition for Hasselmann is redshirt senior setter Hanna Nielson. Although she has statistically outperformed the young setter with 179 assists and an average of 5.42 assists per set, shet has been a great influence on Hasselmann’s growth.

Turning those assists into points is the remarkable offense of senior outside hitter Ali Barbeau. UCSB’s leader on the court as a senior captain, Barbeau is on pace for another outstanding season. A two-time All-Big West First Team selection, she leads UCSB in kills with 105 and owns a team-high average of 3.18 kills per set. She has accomplished career-highs in kills (15) and digs (18) so far this season.

In addition to the prolific attack provided by Barbeau is the offensive precision of another veteran player like senior opposite Britton Taylor. Behind Barbeau for the team-high in kills at 65, Taylor’s efficiency when attacking has been consistent as she has a .271 hitting clip.

While the Gauchos have been solid offensively, UCSB’s defense has quietly exceeded the expectations of many. The unexpected emergence of freshman libero Emilia Petrachi as one of the Big West’s top performers has been admirable. A vital piece in the Gauchos’ playmaking defensively, Petrachi ranks second in-conference in digs per set (4.35) and fourth in total digs (135). Overall, Santa Barbara has done well defending the attack as it is second in the Big West in digs per set with 15.36.

Another underrated aspect of the Gauchos’ defensive force has been its blocking. A total of 77 blocks and 2.33 blocks per set, UCSB’s defense at the net has been superb.

Junior middle blockers Phoebe Grunt and Elizabeth Sheffield have been essential to Santa Barbara’s defensive front. Both ranking top 10 in blocks per set, the duo is responsible for 70 of the team’s total blocks. They’ve been helpful on the offensive side as well as Grunt’s .284 attacking clip and Sheffield’s .341 hitting percentage rank among the top 10 in the Big West.

With just two non-conference games left, hope is still alive for UCSB as it has the opportunity to gain some momentum with another home-based invitational this weekend. The Gauchos will be co-hosting the UCSB/Cal Poly Tournament.

Unfortunately the two rivals will not face each other just yet, but Santa Barbara’s first matchup will be versus Loyola Marymount at 7 p.m.

This article appeared on page 13 of September 17, 2015’s print edition of the Daily Nexus.