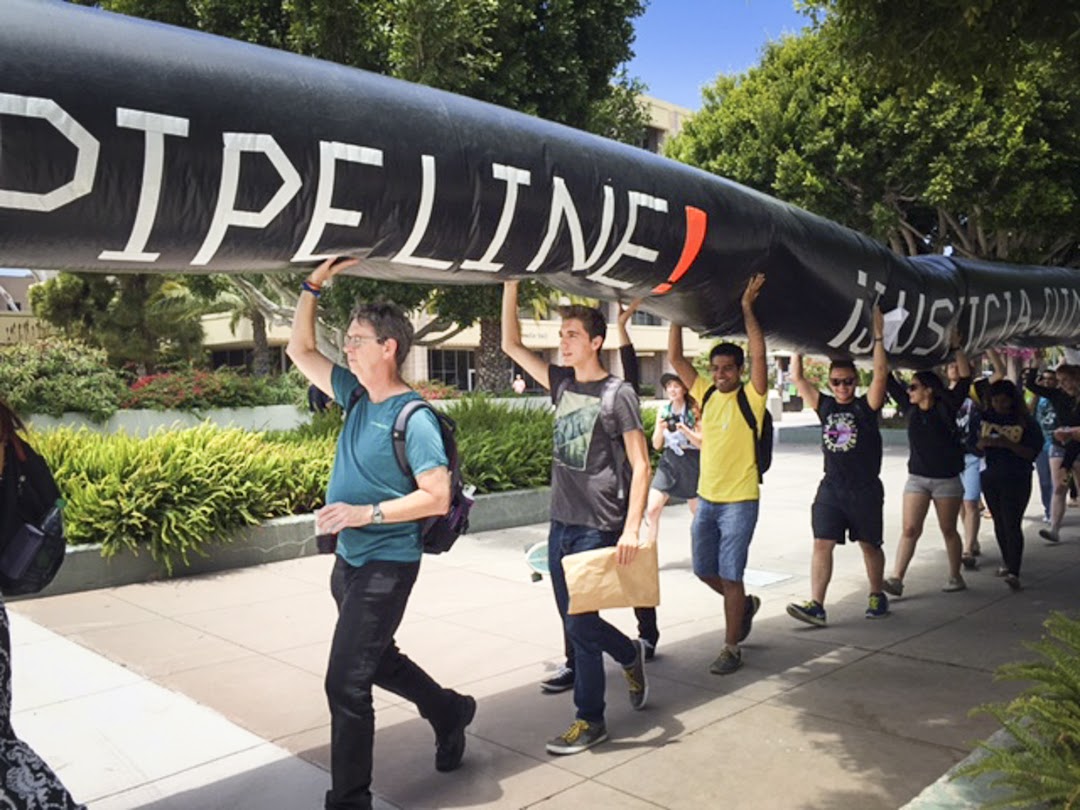 Fossil Free UC is a campaign organization comprised of students, faculty, staff, alumni and community members demanding UC divestment from all fossil fuel companies. The announcement to divest came after increased student pressure from a dozen schools following the May oil spill in Santa Barbara, preceded by three years of constant campaigning from Fossil Free UC.  Despite the partial victory, the University of California continues to invest in oil and gas industries involved in processes like the controversial method of hydraulic fracturing.

“The reason we are targeting these industries is not necessarily that we think we can financially bankrupt them,” LeQuesne said. “The reason we want to do that is because they have assured themselves not to be responsible in terms of the public interest.”

“The fossil fuel industry has an enormous lobbying power and it’s really not okay for these people to uphold democracy and the way that politics are going at the moment,” LeQuesne said. “We will continue for divestment and we will be doing that for as long as it takes. We’re not going anywhere.”

LeQuesne said the goal of Fossil Free UCSB is to change people’s perspective on the fossil fuel industry by educating the public on the industry’s tactics and impacts in person as well as online through social media.

“We do this by having conversations with people at the arbor,” LeQuesne said. “It’s a long process, it’s one person at a time. By talking to people we encourage them to come to our meetings and get involved which is really a wonderful thing to see happening on campus.”

LeQuesne said another goal is to reinvest the UC’s capital in more sustainable practices.

“Once divestment occurs you have a lot of capitol to reinvest,” LeQuesne said. “We’re not just pushing for divestment, but putting that capitol to help benefit smaller communities and to help prevent climate change. It requires a different way of thinking of divestment.”

According to LeQuesne, though the oil spill in Santa Barbara last May was damaging to the environment, it also united the UCSB community to demand the UC recognize its responsibility regarding the spill.

“We had about 75 students demonstrating outside of Chancellor Yang’s office against UC investments,” LeQuesne said. “The UC has investments in Exxon mobile, for example, and Exxon Mobile’s oil was running through that pipeline that burst and endangered a whole bunch of wildlife.”

LeQuesne said Fossil Free UCSB has been campaigning for three years and are excited to have won a “partial victory” through student involvement.

“The recent victory is really testament that you can as a student make a difference through campaigning and activism and that is really exciting to see,” LeQuesne said. “It’s a shame that the recent divestment didn’t result in oil and gas, it was only coal and tar sands. It’s really a matter of time, I believe. It’s not an everyday occurrence.”

“I think fossil fuels are definitely ruining the environment,” Swauncy said. “I think it’s a great idea and stepping stone for the rest of the U.S. However, until we find another energy source that can sustain the population we can’t completely stop using fossil fuels but the UC can help with divestment.”

“This is a hard-fought victory for students and our allies from across California who have been demanding the UC truly live up to its big talk on climate change,” Soiffer said.

A version of this story appeared on page 8 in the Thursday, Sept. 17, 2015 print edition of the Daily Nexus.