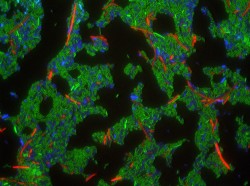 Wild type cells containing the CDI system (green) inhibits the growth of target cells (red) through a variety of mechanisms with protein toxins. Cells in blue do not express this toxin.

UCSB researchers recently demonstrated how Gram-negative bacteria, such as E. coli, exploit target-cell machinery of nearby bacteria and use protein toxins to kill them. Their work furthers current understanding of contact dependent inhibition (CDI) systems and may prove to be useful in the future for antibiotics or therapies that target harmful bacteria.

CDI systems, first identified in 2005 by MCDB professor David Low, allow bacterial cells to touch neighboring cells and inject toxins. This allows bacteria to better compete for nutrients in the environment and protect themselves from the host organism or other pathogens.

“The simplest explanation is that CDI is a mechanism of asserting niche dominance,” Graduate Student Researcher Grant Gucinski said. “You can imagine a scenario where one strain of E. coli has completely dominated a niche, but they’re all getting along fine because they all express the correct immunity protein. Now imagine a different kind of E. coli, rolling up uninvited to this bacterial party: not only is it denied entrance, it is killed right-out.”

Additionally, Researcher Julia Willett describes the role of CDI systems as “contributing to the overall health of large structures of cells.” One theory of increasing the general health of the population is the contribution of CDI in forming stable biofilms. Biofilms are created when microbes adhere together on a surface; this can help bacteria resist predators and contribute to antibiotic resistance of bacterial infections. Another theory is the ability of CDI systems to kill weaker bacteria in order to cycle their resources through other members of the community.

Willett and Gucinski’s research regarding CDI systems builds upon Low’s initial discovery, as their paper closely examines two domains of CDI toxins. It is now clear that one of those domains directs toxins to cross the inner membrane of target cells. Interestingly enough, disrupting certain genes in the targeted bacteria can confer resistance to certain toxins. Mutations in these genes prevent CDI systems from attacking these target cells with toxins.

“CDI systems have the benefit of being specific for a given species, so a CDI system that targets a pathogenic E. coli wouldn’t target other species of bacteria in your gut,” Willett said.

However, she admits that “there is a lot of work that needs to be done before CDI systems could be tested as potential therapeutics,” since the bacteria that cohabit human bodies are sensitive to change, and not yet wholly understood.

Antibiotics, on the other hand, target a wider variety of bacteria, which can be harmful to the normal bacterial population residing inside a healthy gut. Overuse of antibiotics, as well as evolving bacteria, mean that antibiotic-resistant bacteria are becoming more prevalent.

“Antibiotic-resistant bacteria are a growing threat that we cannot afford to treat lightly,” said Gucinski. “We’re running out of effective antibiotics. Only by discovering new antibiotics or developing novel antibiotic therapies will we be able keep this threat at bay.”

Primary authors Willett, a doctoral student in the molecular, cellular, and developmental biology (MCDB) department, and Gucinski, a graduate student in the biomolecular science and engineering program, will see their paper presented in the Proceedings of the National Academy of Sciences (PNAS). Their research was conducted under faculty adviser and MCDB professor.