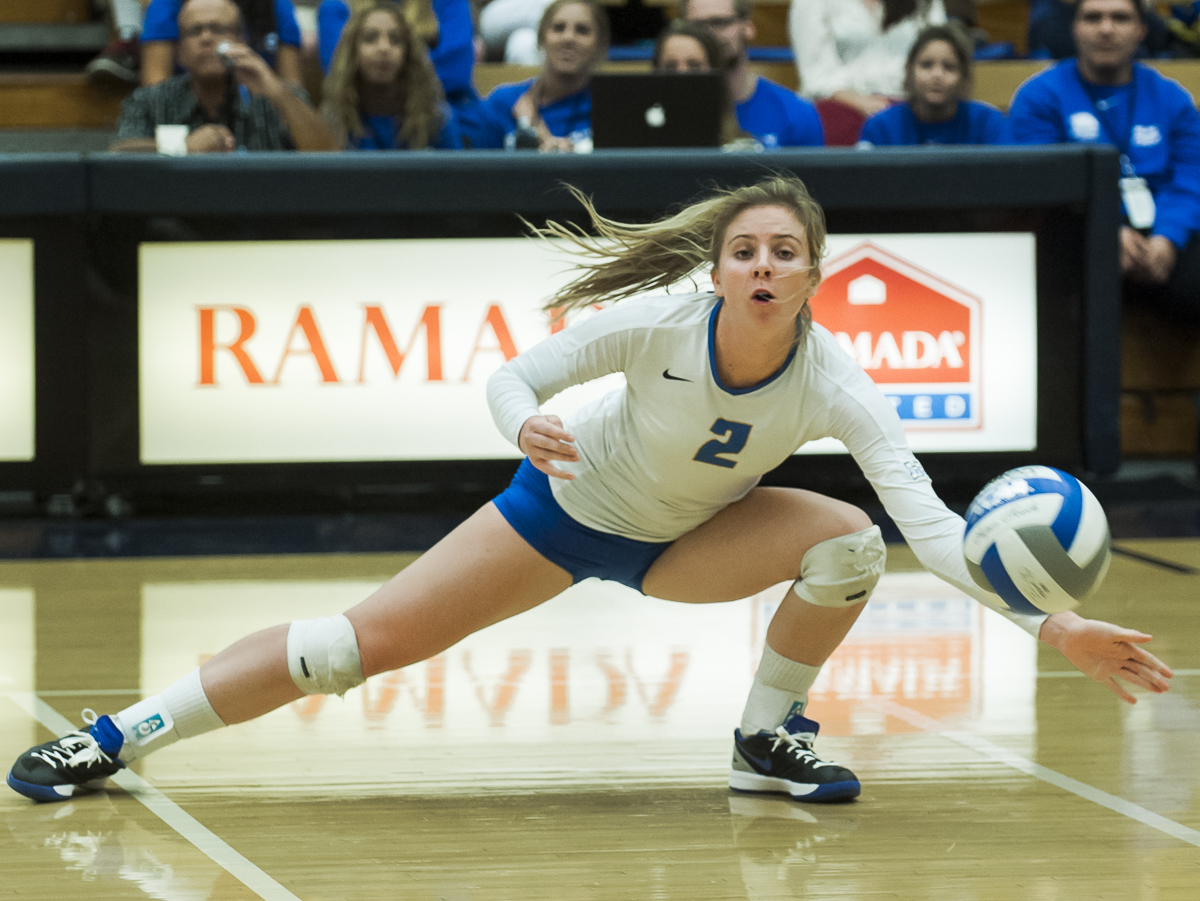 There are higher expectations this season for an improving UCSB women’s volleyball team that had the No. 18 recruiting class this offseason and received a third-place ranking in the Big West Preseason poll.

So far, the 2015 season has been an encouraging start for the Gauchos, who currently own a 2-1 overall record. UCSB began its season on the road playing in the Pepperdine Asics Classic this past Friday and Saturday.

UCSB opened the two-day tournament with a doubleheader event facing Utah Valley State and Incarnate Word. It was a clinic for the Gauchos as they proved to be no match for either team with dominant performances that resulted in back-to-back 3-0 sweeps.

After a remarkable junior season in which she recorded a team-high in kills with 265 and scoring with 311.5 points, senior outside hitter Ali Barbeau continued her great play in the first match of her senior campaign. The two-time All-Big West First Teamer took matters into her own hands leading the Gauchos’ offensive attack with 17 kills.

Adding to the scoring firepower provided by Barbeau was junior middle blocker Elizabeth Sheffield. Her nine kills helped UCSB to further establish its offensive presence, but it was her aggressiveness on the defensive end that was most significant. Sheffield’s three blocks were vital in the team holding the Wolverines to a .103 hitting percentage.

While Utah Valley State’s offense was unable to produce, it was the Wolverines’ defense that kept them in contention.

Leading Utah Valley State’s defensive barrier was the duo of junior outside hitter Kiahna Steiner and senior middle blocker Lauren Bakker. The two combined for a total of 15 blocks to help make up for the team’s lack of offense.

The Wolverines nearly avoided the UCSB sweep in the match’s third set, but could not capitalize on their lead. Utah Valley State went on a 5-0 run during the last set, and eventually gained a 24-22 lead due to some late-game UCSB errors. Despite trailing, a rally of kills and a service ace by senior defensive specialist Shauna Klein led to the Gauchos’ 26-24 comeback to end the game.

It was a similar scenario in the Gauchos second match versus Incarnate Word. While Barbeau and Sheffield continued their dominance on the court, senior opposites Jaylen Villanueva and Britton Taylor emerged with solid showings as well. Villanueva led the Gauchos with nine digs as Taylor’s eight kills gave her a game-high .429 kill percentage.

After losing former UCSB setter Ali Santi, there was some concern if the Gauchos could fill that void. Through two games, redshirt senior Hanna Nielson and freshman Annie Hasselmann have proven that the Gauchos’ core of their rotation will be just fine.

Hasselmann’s play has shown that her many accolades and milestones entering UCSB are well deserved as she finished day one of the Classic with 31 assists, just two behind Nielson’s 33.In spite of a strong start by the Cardinals in the match’s first two sets, the abundance of errors made by Incarnate Word were too much to recover from.

Even a game-high of 12 kills by senior outside hitter Angelique Vidaurri was not enough to overcome the Cardinals’ mistakes. However, UCSB’s defense must be applauded as well as it held Incarnate Word to a .074 hitting percentage. Unfortunately for the Cardinals, their inefficiencies on offense led to a third set that resulted in 11 errors and 11 kills for a .000 kill percentage.

As UCSB and Pepperdine both finished Friday unbeaten, Saturday consisted of two of the tournament’s best teams going head-to-head.

The Waves’ young trio of freshman middle blocker Tarah Wylie, freshman outside hitters Heidi Dyer and Nikki Lyons carried the load for Pepperdine as they combined for a total of 34 kills. However, it was the hustle play of players such as senior setter Becca Strehlow and Dyer that contributed to the Waves securing the last two sets as Strehlow had 22 digs while Dyer recorded 16.

UCSB freshman defensive specialist Emilia Petrachi put on her best performance as she had a game-high 30 digs. Still, while UCSB had an outstanding second set in which it hit .487 percent, the Gauchos lack of consistency cost themselves the game as they averaged a .197 hitting percentage for the game.

UCSB will participate in the Yale Invitational this Friday, Sept. 4th to face Rice at 2 p.m.