A new study by UCSB Professor Michael Mahan and researchers shows that, for as long as they have been studied, pathogenic bacteria may not have been playing up to how they are really made to be. In the sphere of healthcare, this discovery will have a profound effect on the ways clinicians create, test and prescribe antibiotics in the future. 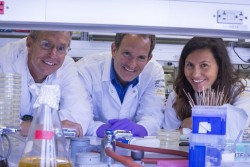 The basis of this artifice, referred by Mahan as the “Trojan Horse” strategy, is as a conditional resistance mechanism that is triggered when bacteria enter variable chemical environments, such as those present in different host tissues. This could explain why antibiotics that seem to be effective when tested on standard growth media in the lab fail to quell the infection when put to work in the human body. The research findings were published online in the open access journal EBioMedicine.

According to Mahan, professor of Molecular, Cellular & Developmental Biology at UCSB and principal investigator of the study, the research team was able to show discrepancies between lab and in-body antibiotic resistant phenotypes of two pathogens, Salmonella and Yersinia, by testing their behavior in special bacterial growth plates that were modified to mirror conditions in the body — a setting in which the bugs typically thrive.

Seven separate antibiotics are tested in this petri plate. On the right, three bacterial colonies are resistant to three impregnated antibiotics, which appear white and disk-shaped. Courtesy of Jan Hudzicki

“The standard means to test clinical samples for antimicrobial susceptibility is on a specific petri plate which sometimes does not correlate with patient outcome,” Mahan said. “The recommended antibiotic is not effective since the host environment triggers changes in the bacterium that makes them resistant to certain antibiotics.”

In this view, the best strategy for tackling a non-responsive infection to antibiotics is to switch the types of antibiotics administered all together. By adopting this action, physicians may begin to see improvements in outcome for patients stricken with infection.

“The host triggers resistance to certain antibiotics; so if a patient is not responding to the treatment, change the drug rather than increasing the dose or duration of the current drug,” Mahan said.

According to Selvi Ersoy, graduate student in Mahan’s lab and coauthor of the study, current testing for antibiotic susceptibility fails to account for the varied microenvironments bacteria are exposed to upon entering the host and how these changes ultimately influence the development of resistance.

“Hopefully, this research will stimulate the development of new testing methods in which we use in vitro testing media that reflects the host environment, rather than the standard nutrient-rich broth,” Ersoy said. “We must challenge ourselves to come up with accurate and reproducible host models if we want to develop effective methods for determining antibiotic susceptibility.”

An exciting implication of this research is that modifications to antibody susceptibility testing may vouch for the efficacy of already existing antimicrobials, renewing interest in older drugs that may have appeared unavailing when tested in standard growth conditions.

“The next wonder drug may already exist in pharmaceutical companies’ chemical libraries which can contain millions of chemical compounds that have been excluded as antibiotics since they were tested on the standard petri plate,” Mahan said. “Some may work well at fighting infections.”

Ersoy hopes the research will result in changes for antimicrobial screening and drug efficacy.

“Hopefully, this research will lead to changes in how clinical testing is done to determine antimicrobial susceptibility of patient isolates. It may also be implemented in the initial stages of drug development and efficacy testing.”

Mahan and his team plan to extend their research on antibiotic resistance to include a look at other bad actors of human health, such as Streptococcus and Staphylococcus.