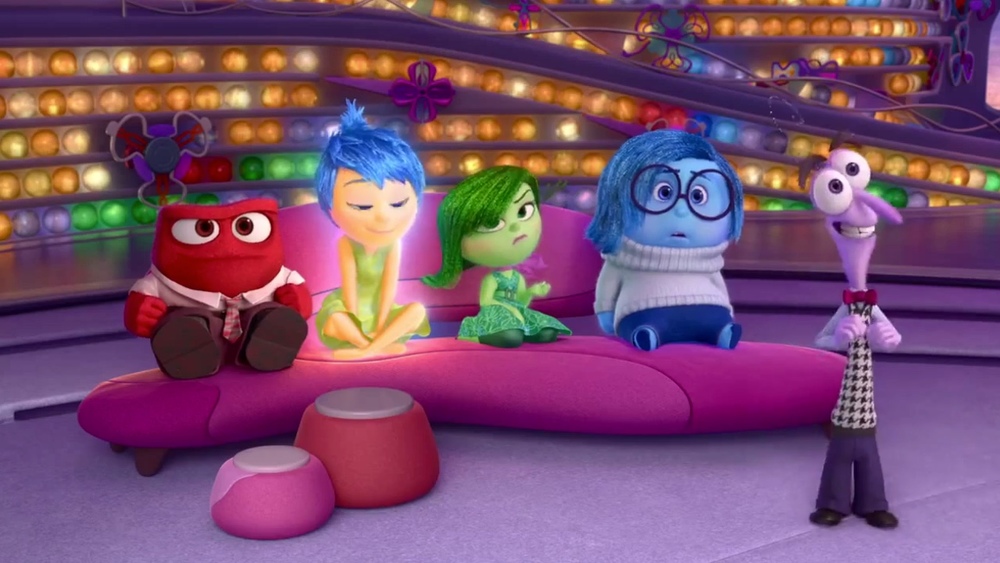 Imagination can be a wonderful thing, depending on how it’s applied. If you muck it up, you end up with something that seems cool, but in reality, you realize that someone fell asleep behind the controls. Take “Doctor Who” for instance; it has a lot of awesome and wildly creative ideas behind it, but I can’t help but laugh in derision when I watch it half the time. Granted, that may be because I’m a bona-fide a-hole (or because I have taste, take your pick), but regardless, I can tell when an idea has been used to its full effect. So I can definitely say … ”Cars” is still too weird for its own good, but “Inside Out” works with its potential.

Plot-wise, Pixar’s newest endeavour is about a few days in the life of Riley, an 11-year-old girl who has just moved from Minnesota to San Francisco, upending her life. Her emotional struggles are personified by Joy (Tina Fey’s shadow, Amy Poehler), Sadness (Phyllis Smith), Disgust (whatshername from “The Mindy Project”), Anger (Lewis Black) and Fear (Bill Hader), who control and monitor Riley’s actions via a jelly-bean-shaped command console. When Joy and Sadness accidentally end up far from their HQ with all of the memories that define Riley’s personality, they have to traverse throughout the other lands representing different aspects of Riley’s consciousness and get back to the HQ before Riley becomes an emotionless shell. Yeah, it’s pretty complicated, but thankfully, never confusing.

It goes without saying (I did set this up in my intro, after all) that this film has some stunningly creative ideas, building an intricate world inside this girl’s head. Riley’s memories are glass spheres that work like GIFs, her most important memories create islands reflecting the standout aspects of her personality (I can already imagine the dozens of lazy sketches on Deviantart depicting everyone else’s islands), her fears are kept in a prison and, most humorously, according to the movie, those annoying jingles that keep popping up in our heads are caused by minion-like workers sending the corresponding memory sphere up to HQ just to annoy the emotions. Dreams are created by a film studio, workers vaccuum up and dump decaying and unneeded memories and daydreams are delivered by a train. Bottom line, everything inside Riley’s head is a plethora of prodigious personifications, gorgeous to behold.

And indeed, “Inside Out” is gorgeously animated, which is probably a given considering it’s a Pixar film.  It’s very bright and colorful inside Riley’s head, whereas San Francisco is misty and a little droll-looking. Scarily accurate. The human characters, Riley especially, have perfect facial animations. Bear in mind, if the people didn’t look like they were properly emoting, the film would have taken a serious hit. Thankfully, it didn’t. There’s also a standout sequence where Joy and Sadness are reduced to abstract forms inside Riley’s head, gradually devolving into mere shape and color, allowing the animators to show off some other styles.

The emotions look and act like they would; Joy is light-footed and flies all over the screen, Sadness moves lethargically, Anger’s head literally catches on fire, Fear, fittingly, has the largest eyes and Disgust looks and acts like a snobby teenager. They are also designed to look fuzzy, therefore huggable and thus practically impossible to dislike. It helps that they’re relatable; they’re not groundbreaking, complex characters by any means, but they’re certainly fun to watch. I felt a strange kinship with Fear when he made droll comments on Riley’s predictably-plotted dreams.

Bottom line, “Inside Out” is an enjoyable romp. It’s colorful, emotionally complex, boasts a wonderful, creatively-endowed world and has fun characters.

If you ever see Alex Wehrung wearing a TARDIS shirt … his mom bought it.