The Daily Nexus
Sports
Six Former Gauchos to be Honored on Sunday
May 28, 2015 at 5:06 am by Daniel Moebus-Bowles 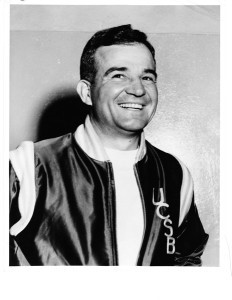 The Santa Barbara Basketball Court of Champions will be welcoming 17 new inductees this Sunday, May 31 in the second annual hosting of the event. Amongst this year’s impressive ballot of some of the area’s finest basketball minds are six former Gaucho coaches and players.

“The people that we have inducted and those coming in this Sunday have truly provided an influence [in] Santa Barbara that goes far beyond basketball,” the court’s director, Curt Pickering, said. “On top of being some of the best in the sport, they have also been huge pillars of the community.

Coach Willie Wilton is the first Gaucho that will be inducted this Sunday. In 1937, he was hired as head coach of the UCSB men’s basketball team. During his 20-year tenure, Coach Wilton totaled a record of 205-163, which still stands as the best winning percentage by any head coach in UCSB history at .557. Although Wilton has passed on, his children, Mike and Wendy, will accept his induction to the Court of Champions.

Joining Coach Wilton will be one of his former players from UCSB, Gene Snyder. Following his time as a player, Snyder became one of the most successful basketball coaches in Santa Barbara High School’s history, leading the Dons to a total record of 104-77 in eight seasons.

Lowell Steward is another former player who will be ushered in with the 2015 class. He became the school’s first African-American captain and helped lead UCSB to the semifinals of the NAIA tournament, where he was not permitted to play due to segregation issues. In late 2014, Steward passed on due to illness. His son Lowell Jr. will accept his induction.

A UCSB alum as well, Coach Jim Eyan will be the final male inductee. Former assistant coach at Santa Barbara City College for four years and head coach of Dos Pueblos High School for a season, Eyan then served as an assistant coach for five years at UCSB. He then transitioned to the professional level. In his time, he has experienced an NBA finals with the Lakers and two Western Conference Championships with the Trailblazers.

The Court of Champions will also welcome two women, Cori Close and Barb Beainy, who were teammates on UCSB’s women’s basketball team.

A four-year starting point guard, Close is the first Gaucho to record a career total of 1000 points and 500 assists. After graduating, she went on to become an assistant under UCSB Head Coach Mark French for nine years. As Head Coach of UCLA’s women’s basketball team, Close recently led the Bruins to a championship victory in the WNIT tournament this past season and holds an overall career record of 72-60.

Close’s former teammate Beainy was awarded Big West Player of the Year and Clutch Player of the Year in 1992, when the team won its first ever Big West title. Following her outstanding career, Beainy now serves as the Director of UCSB’s Wellness and Fitness program in Exercise and Sports Studies.

“UCSB has been a huge part of the Santa Barbara community on multiple levels and we are thankful to have them in the area,” Pickering said. “UCSB Basketball has provided entertainment for the community, an outlet and bridge for our youth, and the school itself shapes and develops so many of the young people in our area.”

Along with these six inductees, another 11 who have embraced huge roles in both the Santa Barbara and basketball communities will be honored this Sunday evening as well. The other inductees can be viewed at santabarbarabasketball.com.

A version of this article appeared on page 10 of May 28, 2015’s print edition of the Daily Nexus.