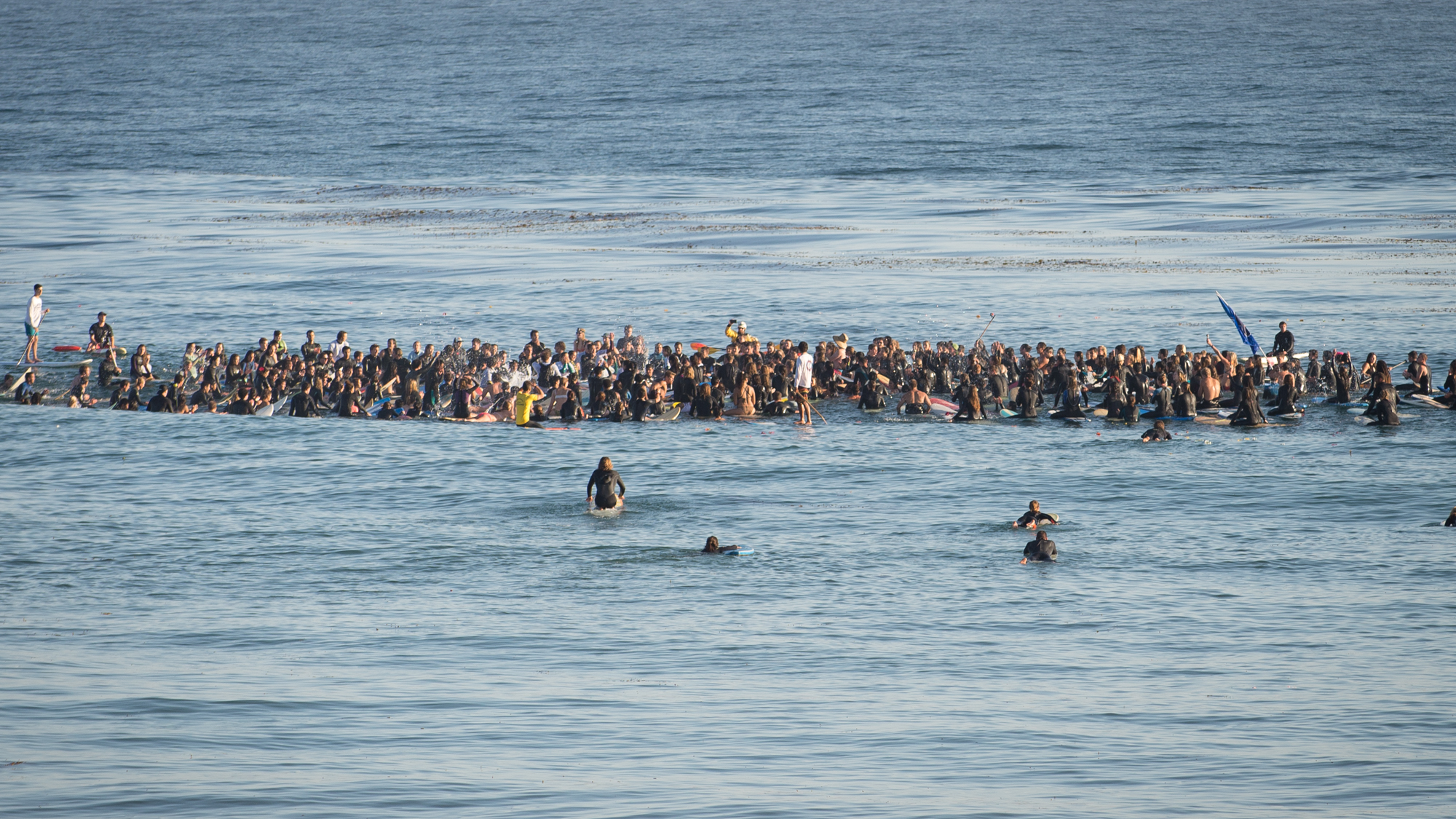 The ability to hold a memorial in this way for those lost last May is unique and deeply personal to the UCSB and Isla Vista community. Last year’s Paddle Out was hugely successful in helping many to find solace on the water and to recognize the hope and strength that comes from community. Lorenzo Basilio/Daily Nexus

Hundreds of UC Santa Barbara students and Isla Vista residents attended the second annual I.V. Memorial Paddle Out Wednesday evening at the beach north of Campus Point to commemorate the lives of the six students lost in the tragedy of May 23 last year.

UCSB Surf Team hosted the event with help from lifeguards and safety personnel who led attendees with boards and floatation devices into high tide. Onlookers who did not enter the water watched from the beach and surrounding cliffs as participants in the ocean formed a circle to symbolize solidarity, similar to the one formed a year ago.

Associated Students (A.S.) Assistant Director for Community Affairs Aaron Jones said the Paddle Out represents healing and is the “perfect ending” to the series of memorial events paying homage to the events of May 23 last year.

“In my humble opinion, doing it in the ocean is, in itself, a healing and a cleansing act,” Jones said. “I think many community members that participated this evening intrinsically recognized the event.”

Fifth-year philosophy major and UCSB Surf Team member Alex Banks said the event was unique way to pay condolences to the students lost last year due to I.V.’s close proximity to the beach.

“We have this beautiful ocean, and paddling out and surfing is a great way to pay respect to people that have passed away, regardless of the circumstances,” Banks said. “The fact that we have this resource is cool, and I think it’s a very inviting and serene atmosphere.”

First-year biology major Anne Trinh said she was not present during the events of May 23 last year, but still felt the Paddle Out strengthened the sense of community.

“Being able to come out makes everyone feel like they are part of the community,” Trinh said. “So taking part in remembering those we lost, and recognizing what happened really allows us to come together, no matter how long you’ve been here.”

Jones said the Paddle Out took on a “jubilant” atmosphere when people on the shore cheered for a couple’s pitbull wearing a life jacket struggling to stay on the surfboard while the couple tried to Paddle Out. 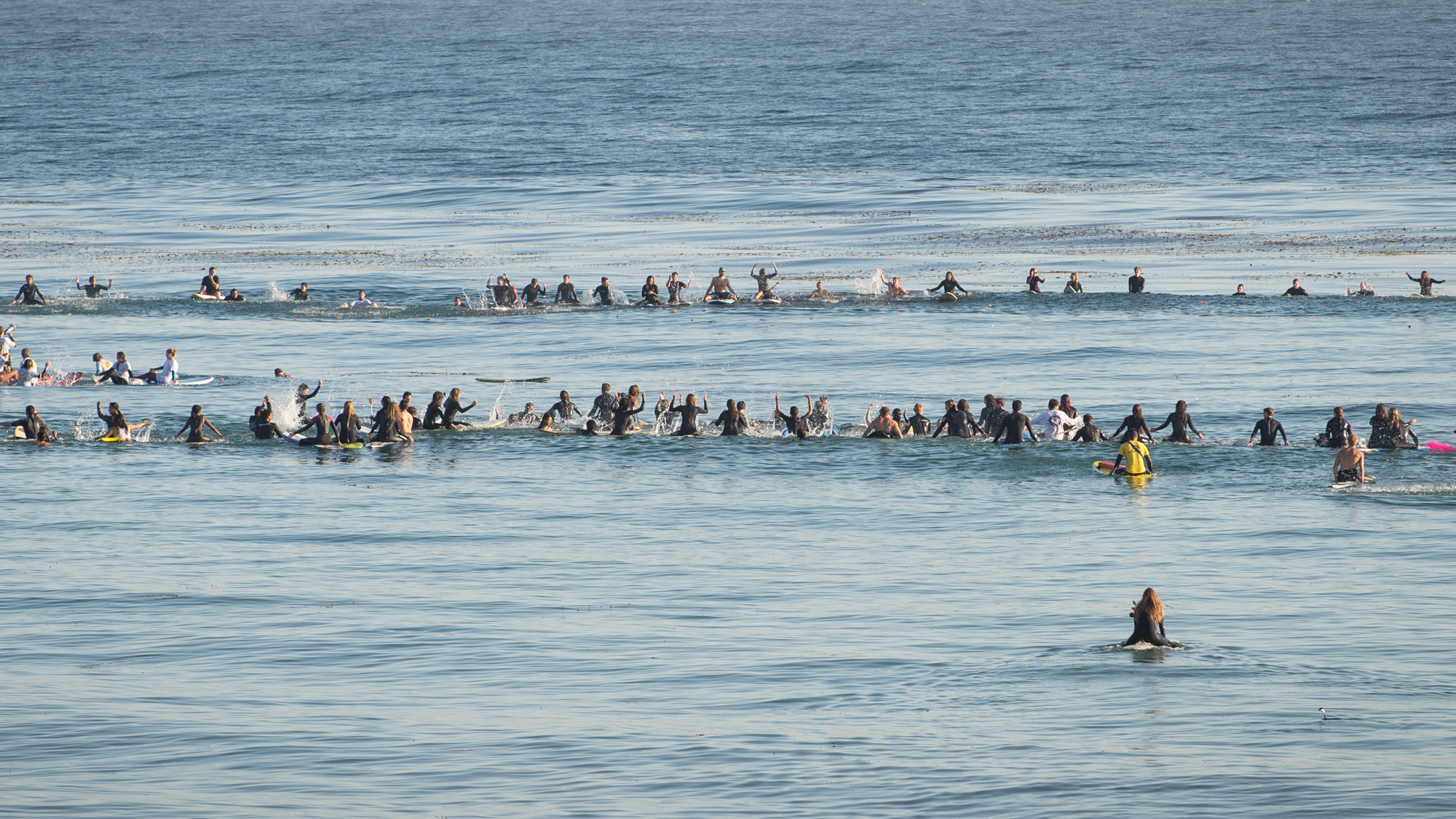 “It was after everyone had started paddling out and they were trying to catch up,” Jones said. “But the waves started to kick up and they just couldn’t get the dog out there on the board. A wave would come over and knock him off the board and people would be like, ‘Oh no, oh no,’ and it was that kind of fun community vibe.”

According to Banks, the presence of lifeguards, water patrol and emergency responders contributed to the sense of community for those participating in the event, because it showed solidarity between the county and local residents.

“The fact that we got all these different agencies like the fire department and police to come out and watch over this event just promotes what we’re trying to do here even more,” Banks said.

According to Jones, the Paddle Out is symbolic of UCSB’s dedication to serving the environment and overcoming difficulties in light of the recent oil spill near Refugio.

A version of this story appeared on page 1 of the Thursday, May 28, 2015 print issue of the Daily Nexus.