The Daily Nexus
News
Speaker Gives Talk Against Same-Sex Marriage
May 27, 2015 at 2:22 am by Christopher Chen 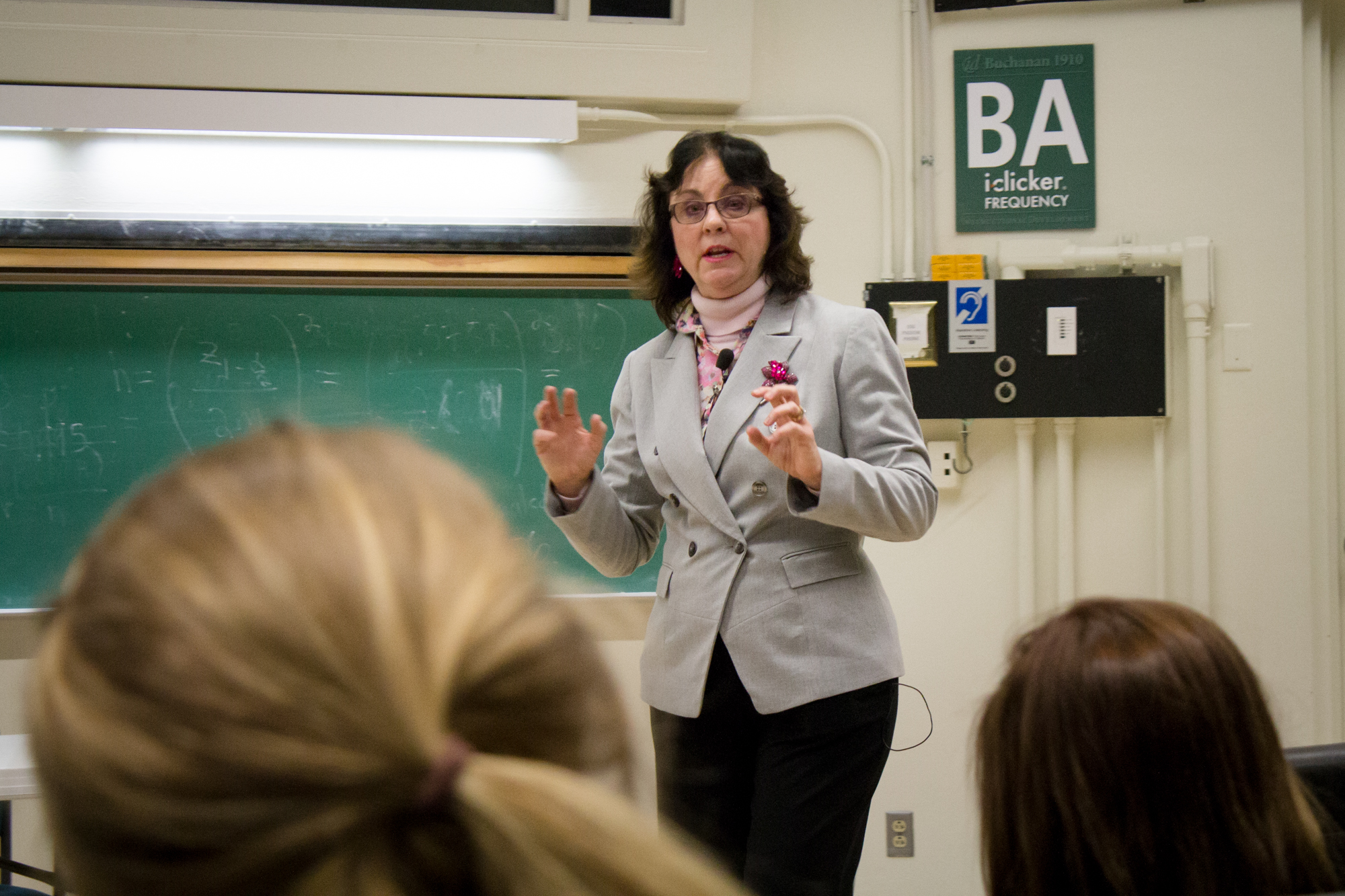 Anscombe Society aims to define marriage as “the exclusive, monogamous union of a man and a woman and its role as an institution which is necessary for the healthy family, and thus for a healthy society” and promotes traditional family values. Morse argued against same-sex marriage by outlining values of heterosexual unions. Prior to the talk, members of the queer community chanted inside the lecture hall to protest the ideas to be presented by Morse.

According to Morse, non-traditional marriage negatively affects how children connect to parents.

“The marriage debate is really about children; all the other issues you hear about can be handled some other way than re-defining marriage,” Morse said. “If we’re going to re-define marriage, we’re somehow re-defining the institution that attaches one generation to another.”

Morse said forms of “third-party reproduction” like surrogacy are “structural injustices,” because they separate children from their biological parents.

According to Morse, same-sex marriage “victimizes” people in unexpected ways.

“I get that we’re going to have genderless marriage soon, but I just want to say there are going to unanticipated consequences,” Morse said.

Flores said while the talk revealed “worthwhile reasons” to oppose same-sex marriage, he doubts those in favor will change their mind.

Second-year communication and feminist studies double major Kevin Tang participated in the protest and said Morse’s argument ignores the importance of love in a family unit.

“She cares so much about traditional family structures that I feel she leaves out the most important aspect of a true family, which is love and support, and I believe that our community is a family that provides exactly what her talk lacked,” Tang said.

“I think the basis for her arguments are in religion, in God — which I actually agree with — but I don’t think she was really able to present those really clearly. I was a little disappointed,” Consoli said.

Consoli also said it is important for “liberal schools” that largely support gay marriage to consider other views.

“I feel like we should hear other people’s opinions, so I think that’s very important so I did appreciate that. Instead of always butting heads, we should be able to come together and discuss these things,” Consoli said. “I think it’s civil of us.”

[Correction: This article originally stated A.S. Queer Commission protested outside the lecture hall where the event took place. Some of the students involved in the protest were members of the queer community, however were not protesting in affiliation with the commission. In addition, the protestors were not escorted out of the event by Community Service Officers (CSOs), but left on their own accord.]

Your reporting is inaccurate. AS Queer Commission did not protest, that was simply members of the queer community. We were also not “escorted” out, we left on our own accord.

I would also like to point out that it was individual members of the queer community that protested and not an organization, A.S. Queer Commission. Also, we did leave on our own accord and allowed their discussion to continue; we were NOT escorted out by CSOs. Please be sure to accurately report these events in the future.

The homosexual community at UCSB should be deeply ashamed of the obscene, petulant, illiberal filth and vulgarity that they employed (in a venue where children were present) in the service of silencing and disrupting speech they happened to dislike. They have demonstrated to the UCSB community that they abhor intellectual engagement and that they celebrate intellectual cowardice.

I applaud those in favor of same sex marriage who stayed to listen to Dr. Morse’s presentation and asked thoughtful questions during Q&A.

You called a writer on this website “offal” (shit) a “deviant” and “depraved” for (in your words) publishing his “view of sexuality that this author espouses and the vulgarity with which he expresses this offal. Sex is something upon which moral obligations obtain…” You act like a second-grade bully and have the mind of a conservative Congressman from the forties. What people do in their sexual lives and how they talk about it is absolutely none of your business anyway. While I respect your right to be a homophobe, you don’t have to verbally attack people just to reduce your… Read more »

Let it be noted that I described the author’s views as offal, not the author himself. At any rate, this amounts to changing the topic. The actions of the protesters were petulant, vile and illiberal. Your lack of argument to the contrary indicates that you do not seem to disagree with this assessment.

Hmmm… and what do you think about giant posters of bloody fetuses on campus? Are those vulgar? Do you think that free speech is a right only for anti-abortion protestors, and, that pro-gay marriage protestors are “obscene, petulant, illiberal filth and vulgarity that they employed (in a venue where children were present)’? Children go through the Storke Plaza area (from the UCSB child care center nearby) where the anti-abortion protestors showed giant posters of bloody dead fetuses. One thing I’d ask the Anscombe society: should a man and woman who are unable to conceive children and who have no intention… Read more »

I just want to point out that I attended the event and although the chant may have been quite shocking and unexpected at first, it lasted less than four minutes AND we left with plenty of time for the speaker to present her information. Some may see this as “rude” but I believe this was done in the most respectful way possible. Notice how we were not escorted in any way out of the premises, despite the presence of CSOs, and we left on our OWN REGARD, allowing the discussion to continue in a timely manner. It’s easy to claim… Read more »

Commenter, you admit that you took part in the childish, profane disturbance of our event. You complain that persons in the audience treated you and your group with suspicion and that they treated you as a hostile element. Have you considered the possibility that they treated you with suspicion because you indeed were a hostile element who came to disrupt the event with vulgarity and disrespect? Some individuals who were same-sex attracted and others who were in favor of same sex marriage did in fact stay to listen to Dr. Morse’s arguments and they presented worthwhile objections during the Q&A.… Read more »

How rude. I hope that students will be more respectful at future events organized by your Incel club.

This is logically unsound

People are entitled to think and say what they want. I support same-sex marriage, but I think it’s important for people to be able to stand up and say what they think. But my own ethics and opinions aside, this still seems problematic. I’m going to tackle what she had said purely from a LOGICAL perspective (I’ll do my best to separate my own opinions from this): – “Third party” reproduction allows couples of any sexual preference to have children, including heterosexual couples who could not do so otherwise as a result of health problem. Adoption also allows those kinds… Read more »

Carlos Flores
Reply to  This is logically unsound

Commenter, I personally sent a cordial invitation to the president (Chris Buck) and vice-president of the Queer Student Union to co-host a debate on same sex marriage so that both sides might present arguments in favor of their position in the interest of intellectual engagement. The Anscombe Society was and continues to be, then, demonstrably committed to intellectual engagement on this matter. Dissappointingly, I received no response from anyone in the Queer Student Union. Helpful fellows, The Queer Student Union apparently had other plans. Presumably led by Chris Buck, the president of the QSU, members of the homosexual community showed… Read more »

*sigh*
Since you feel the need to publicly say things about me that are not true:

2) I am not the “president” of Queer Student Union.

3) The protest was not affiliated with any queer orgs on campus. It was simply a group of queer UCSB students.

4) The protest was planned and lead by many queer people on campus, not just me.

Carlos…the First Amendment is messy. Obviously you think it only applies to you and your club…

I have neither mentioned the First Amendment nor described the actions of the protesters as unconstitutional. Your response, then, is puzzling.

Then you’re rather dense Carlos. Given the whining you’ve been doing about how some people exercised their First Amendment rights, it appears you have scant regard for freedom of speech by those opposed to your message.

Commenter, I have described the actions of the demonstrators as petulant, illiberal, vile, vulgar, disprespectful and indicative of intellectual cowardice. Do you disagree with this assessment? If not, then there doesn’t seem to be a disagreement between us.

Carlos, you are definitely dense dude. I totally disagree with your assessment. Now quit whining and just go away.

I am a queer adult and was raised by a lesbian couple during a time when same-sex marriage was not possible. I had a generally good experience with my mother and her partner, and the fact that my mother’s partner never adopted me and never assumed excessive legal powers over me — which would have happened had marriage been legal — benefited me tremendously. My father’s name on my birth certificate made it possible for me to reconnect with him in my late 20s and rebuild a relationship with him. For all these reasons, I vehemently oppose both gay marriage… Read more »

Robert, I’m rotflmao at your petulant little rant. As far as the youngsters are concerned you’re simply a bitter old queen well past your prime and totally irrelevant. You say you’re 44 and talk glibly about the 1970s. If you’re telling the truth about your age you were born in 1971 and was in elementary school throughout the decade. Obviously what you know about the ’70s was gleaned from history books. I was in high school and college during the same period and was around when Gay Pride politics started. You’re mostly bluster. Yeah protest can be a little tacky… Read more »

b
Reply to  Robert Oscar Lopez

You heard it kids! It’s violent and oppressive to give parental rights to someone who is acting as a parent to a child.

You oppose gay marriage because you’re too stupid to figure out how to track down a biological parent. Or too cowardly to ask your mother.

Make it the law to make him love you and not his other parent? I’m going to go with stupid, although it could certainly be both.