The Daily Nexus
Film & TV
Ecological Storytelling Screens Miyazaki Classic: “Nausicaä of Valley of the Wind”
May 27, 2015 at 8:00 am by David Jackson 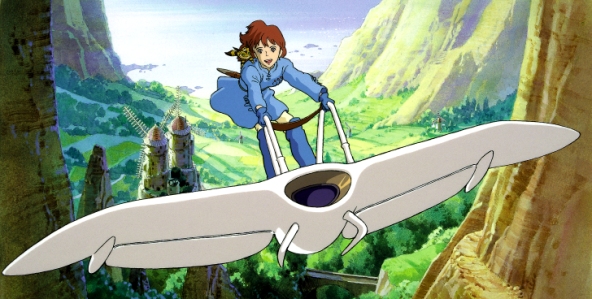 Graduate student Jeremy Chow from UCSB’s English department hosted the screening of the animated film “Nausicaä of Valley of the Wind” on Friday in South Hall room 2635.

This spectacular film, written, animated and directed by legendary Japanese filmmaker Hayao Miyazaki, depicts the life of a young Princess Nausicaä in a dystopian future set 1000 years after an apocalyptic war referred to grimly as “the Seven Days of Fire” destroyed most of civilization. For Nausicaä and the surviving inhabitants of the Earth, life is dominated by interactions with the ever-growing Toxic Jungle that was spawned in the aftermath of the war. The Jungle and the massive insects that evolved to protect it threaten mankind with extinction as they relentlessly consume the remaining human kingdoms, which are plagued by war and starvation. Confronted with this bleak reality, Princess Nausicaä devotes herself to understanding the mysteries of the Toxic Jungle to see if there is any hope for humanity to coexist with the Jungle and its giant insect guardians.

Miyazaki cements his trademark motif of strong female lead characters in the film, with Princess Nausicaä Kushana fighting to defend the relatively prosperous Valley of the Wind from an invading army led by Princess Kushana, who seeks to revive a “Giant Warrior” from the Seven Days of Fire 1000 years prior. With the misguided plan of using it to “burn down the Toxic Jungle” and destroy the insects, Kushana battles with the militaries of other kingdoms in a desperate struggle for control of the Warrior and the fate of the planet. Ironically, as Nausicaä later discovers, the monstrous Giant Warriors and their weapons helped create the Toxic Jungle in the first place and that the Jungle is actually purifying the Earth of mankind’s past pollution.

The film’s strong environmental message, while laid on thick, is delivered in such a compelling and frightening manner it makes James Cameron’s “Avatar” and “Elysium” look like child’s play. In “Nausicaä,” the consequences of ecological degradation are taken to far more horrifying extremes, with the end of the human race seemingly inevitable. Despite the doom and gloom atmosphere, Princess Nausicaä’s optimism (or naïveté) that a different future is possible both bewilders and inspires.

“Nausicaä” also conveys a subtler, yet equally powerful anti-nuclear message. In one of the most bizarre and mesmerizing scenes of the film, Kushana deploys a prematurely hatched Giant Warrior, essentially a living tactical nuclear weapon, against a stampeding horde of attacking insects with devastating effect. Kushana’s lieutenant, upon witnessing the enormous explosion caused by the Warrior remarks, “Incredible, no wonder the Earth was incinerated.”

First-year English major Casey Coffee agreed the Giant Warrior was “allegorical for nuclear war,” given the context of the director’s early childhood living in Japan during the Second World War.

“When it shot the beam out of its mouth, that explosion was definitely reminiscent of a cloud of destruction, and since Hayao Miyazaki is Japanese, I could definitely make a connection,” Coffee said.

Every scene of the film is set upon a beautifully hand-painted background that brings each frame to life. The steampunk-style anime crafted by Miyazaki in the film creates a visually stunning futuristic world in which certain aspects of technology are far advanced, most notably Princess Nausicaä’s jet glider, while others remain primitive and medieval in style. Soldiers wield swords, wear plated armor and tunics, yet simultaneously drive tanks and pilot fighter jets. The contrast and contradiction between elements of the new and the old feel increasingly natural as plot unfolds and the verisimilitude kicks in. Somehow, Miyazaki makes it work.

“The comicbook-style action sequences I thought was pretty retro and cool, because I know a lot of his other films aren’t like that,” Tran said.

Perhaps the most fantastic feature of “Nausicaä” is its beautiful original score by composer Joe Hisaishi, which elevates the emotional impact of the films most gripping scenes, and is occasionally nothing short of enchanting. Though the film was originally released in 1984, it was masterfully dubbed in English and rereleased in 2005, with voiceovers from an impressive A-list cast including Patrick Stewart, Uma Thurman, Shia LaBeouf, Edward James Olmos and Mark Hammond.

More than 30 years later, “Nausicaä” remains a must-see for anyone with a taste for epic storytelling, quality science-fiction or just film in general. If you limit yourself from seeing this film because you “don’t like anime,” then you are missing out on a true work of art. There is a reason “Nausicaä” was selected as one of the few animated films screened by Turner Classic Movies because, at the end of the day, it is just a damn good movie.

The event was hosted as part of an ongoing series through the Environmental Humanities Initiative. The next movie to be shown by the group will be “Princess Mononoke” on May 28.