The Daily Nexus
News
Students Win New Venture Competition With BAC Monitor Startup
May 22, 2015 at 2:30 am by Carissa Quiambao 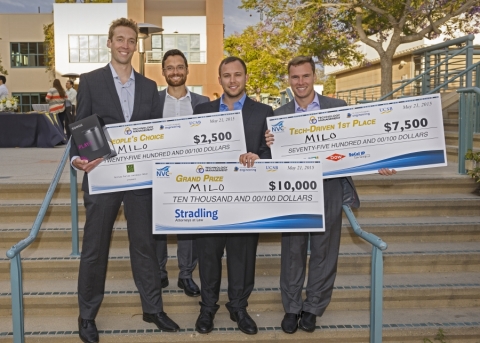 “There’s lots of great stuff coming out of UCSB, and the depth and scope of the engineering talent here compared to when I was in school has become very impressive,” Spievak said. “From a material science perspective, it’s now the number one school in the world.”

According to Spievak, the NVC develops industry and job production for the benefit of the local and global community.

“Locally, it creates jobs and it keeps people in Santa Barbara, which is a win,” Spievak said. “Globally there are those occasional technologies like Integrated Fluidics that truly have the potential to save a lot of lives and change the world, and those are innovations that are happening right here on campus.”

Milo member and computer science graduate student Daniel Imberman said his startup is already in talks with an incubator featuring a technology host angel, and that all his group members are interested in moving the business forward.

“The high point was the second we got that first working trial,” Imberman said. “Up until then I was just kind of not sure what we were doing was going to amount to anything, but once I saw that data chart it was like, ‘Oh my god. We actually have something.’”

According to Imberman, participating in the NVC has allowed him to gain knowledge and experience that transcends traditional business and technology curriculum.

“I’ve learned more and worked more in the past three months than I have I the past two years,” Imberman said. “I’ve had daily 8 a.m. to midnight days. If I wasn’t in school, I was working on this all the time. Honestly even if we hadn’t won a dime I would’ve walked out with so much more business knowledge and just ready to attack the world based on this one competition.”

Fourth year biochemistry major and Chemogaurd member Letitia Mueller, the only female finalist to win an award in the tech-driven category, said if her startup receives seed capital, it could “open up a whole new world of how to do chemotherapy.”

“If we have a way to make chemo more effective, we could have people survive through chemo with higher dosages,” Mueller said. “If they can tolerate them or avoid the drugs they can’t tolerate, then that makes chemo more efficient and improves quality of life and reduces costs.”

Mueller is one of three females to have made it to the NVC finals, along with graduate student in the Bren School of Environmental Science Megan Miranda of Slightly Nutty, who tied for the second place award in the market-pull category, and psychology graduate student Katie Koehler of Insiight, who won first place in market-pull.

According to Mueller, the lack of female representation in the competition reflects an overall male-dominant trend in the tech industry that she hopes to see eliminated in years to come.

“People sometimes don’t understand the gravity of the situation when you are one of the few women in your field.” Mueller said. “That being said, it’s really important for women to realize that there are so many avenues you can go down that haven’t been travelled by females. Why is the NVC 90 percent male dominated? It shouldn’t have to be that way.”

[Correction: A previous version of this article incorrectly stated that Letitia Mueller was the only female to win the New Venture Competition Finals. In actuality, finalists Megan Miranda of Slightly Nutty and Katie Koehler of Insiight won awards in the “market-pull” category.

Also, a previous version of this article incorrectly quoted Jason Spievak as referencing to a company called Asta Fluidics instead of the correct Integrated Fluidics. The Daily Nexus apologizes for these errors.]