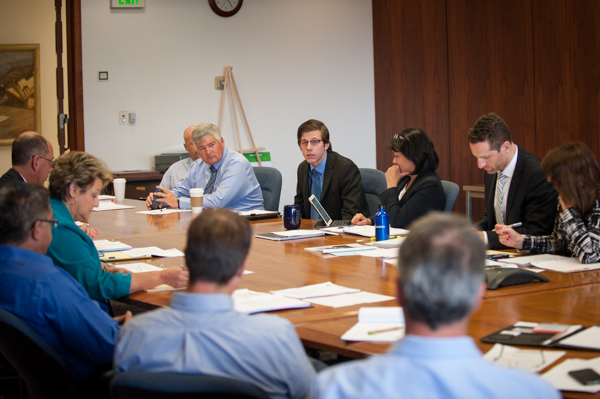 The Santa Barbara County Board of Supervisors met Tuesday morning at the County Administration Building and voted 3-2 to support Assemblymember Das Williams’ Isla Vista Self Governance Bill, Assembly Bill 3 (AB 3), on the condition that it be amended to include a six-year limit on the implementation of a Utility Users Tax (UUT).

Williams originally introduced AB 3 in December 2014, proposing to establish I.V. self-governance through a Community Services District (CSD). The bill aims to improve public services using revenue from a UUT, which would tax residents based on their utility bills. Currently, the bill requires approval of the UUT through a two-thirds vote of CSD residents by 2027, but the amendment proposed by the Board would require approval of the tax by 2022.

Farr said the amendment was suggested following Wolf’s concern that the CSD board would be active for too long without a source of revenue.

“Wolf expressed a position of support if there was an amendment,” Farr said. “She put forward that she is uncomfortable that the board could be funded as long as ten years without any funding to support it. We compromised on six years.”

Former Associated Students External Vice President of Local Affairs and fourth-year political science and psychology double major Cameron Schunk said the Board is focused on ensuring the county does not face financial liability if a tax is not approved soon after the formation of the CSD.

“The way it’s written right now is that the Board of Supervisors will place the CSD on the ballot by the next county election, so in 2016,” Schunk said. “That doesn’t imply taxation or anything like that, so the real discussion was centered around what kind of liability does that place on the county.”

Community organizer with Williams’ office Darcel Elliott said she thinks the board’s proposed amendment is fair, but the office has not yet discussed it with legislative and local stakeholders.

“I don’t think it’s an unreasonable request, and I appreciate the Board giving us a concrete suggestion to work with,” Elliott said in an email.

According to Schunk, while supervisors in opposition of AB 3 expressed concern that the financial feasibility is not underway, Williams’ initiative is only “four or five thousand dollars” short of the goal of $70,000 needed to conduct the study.

“I think there is some sandbagging occurring,” Schunk said. “It’s really easy to say, ‘Well they don’t have a financial feasibility report,’ when I don’t really think gives justice to the whole conversation.”

Visiting economics professor Lanny Ebenstein said Fund for Santa Barbara, a nonprofit grassroots financing organization, will be completing a financial feasibility study to determine the costs of a CSD.

“The financial feasibility study is underway at this point and it’s something that the Fund for Santa Barbara is coordinating — they have a consultant for it,” Ebenstein said. “It’s anticipated the final study may be completed by August to allow final consideration by the state senate and the governor in August and September.”

Schunk said the supervisors who oppose AB 3 do not understand the I.V. residents’ perspectives.

“I don’t dislike either of those supervisors, but I think their views are disconnected from the needs of the Isla Vista community,” Schunk said. “The areas that they govern are very different from Isla Vista.”

According to Farr, local governance is concerned about the “tight” timeline to get the bill approved through legislature, but she is optimistic after seeing the voting results of the Assembly Committee.

“We got such an overwhelmingly positive vote out of the Assembly Committee, which was extremely encouraging,” Farr said. “Six yes, one no and only two abstentions for a bill that is pretty unusual.”

Ebenstein said the UCSB Foundation trustees deserve much of the credit for initially suggesting I.V. bypass the Santa Barbara County Local Agency Formation Commission (LAFCO) process to establish a CSD. According to Ebenstein, the university should be included within the boundaries of the CSD because much of I.V. is comprised of UCSB students.

“The UCSB foundation trustees report recommended that the CSD be established by the state legislature rather than by LAFCO, I think it’s the right course to go,” Ebenstein said. “The university is obviously the big institutional player in Isla Vista and for that reason it would be appropriate if the students … were within the district.”

“Getting support from two local governments that are significantly impacted by what goes on in IV is huge for AB 3,” Elliott said in an email. “It shows that this is a solution the whole community can support, including those with significant experience in running local government.”

Ebenstein said he is optimistic about the bill, and considers a CSD the best solution to I.V.’s problems after living in the community for 54 years.

A version of this story appeared on page 1 of Thursday, May 21, 2015’s print edition of the Daily Nexus.