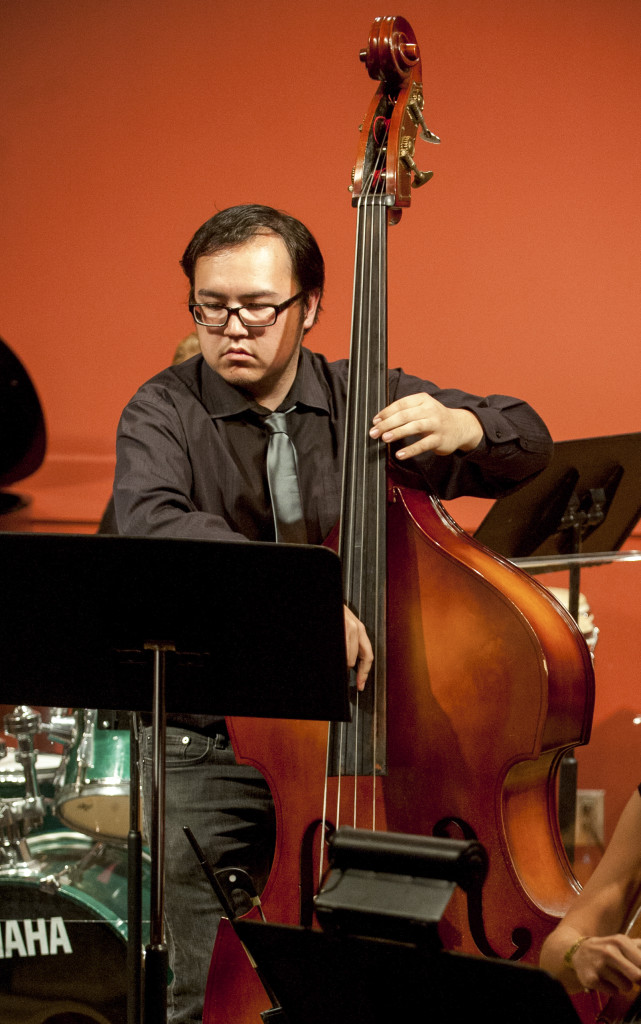 Thursday night, I walked into Lotte Lehmann Concert Hall to see Robert T. Johnson’s senior composition recital. When I was handed bubble wrap and a program with “RECESS” instead of “intermission” written in chalkboard-y font, I knew I was in for a blast. I sat with first-year theater major Jeremy Scharf and first-year CCS music composition major Kelten Hemingway, both of whom were familiar with Johnson’s work.

“[Robert] played bass in the musical ‘Even Greater Britain’ and he’s just a very friendly guy … he’s multifaceted as multifaceted can be. He’s crazy accomplished in that he’s directed a lot of local theater and high school musical theater productions. He rearranged the scores for high school musical productions; he did ‘The Mystery of Edwin Drood’ at Santa Barbara High School. I saw that three weekends ago and it was absurdly good!” Scharf said.

Johnson displayed his skills in piano, bass and conducting, and although a fourth talent wasn’t featured, Hemingway assured me that Johnson is also highly accomplished at what he’s dubbed “composer singing: in tune, but lazy.”

Johnson opened his recital with a lovely piano solo entitled, “lyrics not included.” With a beat as steady as an anchor, a high-energy chase from note-to-note took place in the melody of the song. I was captivated until the final measure, and briefly took a glance at my program during the applause — to find that “RECESS” was barely the tip of the witty iceberg which was the paper in my lap. His solo was titled “lyrics not included” and was followed by the tagline “re-experience the joy of opening a present to find that batteries are sold separately.” Lacking in the tech-savvy department, batteries never cease to amaze me; however, I daresay none were needed to make this exactly what I want for Christmas. Almost immediately after I figured out I wasn’t holding just any average program, it was time to focus on the stage again.

Johnson was joined by soprano Molly Clementz, cellist Kathryn Carlson and Nick Diamantides who performed with “pieces of metal that get hit” to show his composition named “unfurled.” Johnson took the role of conductor for this operatic piece, which was punctuated by more rests of complete silence than any traditional opera. The silences contrasted with, and emphasized, every powerful note, while my mind’s eye added the appropriate blanket of dry ice creeping onto the stage.

After one more piece in which Johnson performed on the bass, he spent the rest of the night at the piano, which he managed to refer to in seven unique ways, my favorite three of which were:

When recess came, I was eating chocolate chip cookies and sandwich wraps with Allison Wright, who told me more about this snazzy individual performing onstage: “My favorite]] part [of the show] is the fact that Robert came out with an iced coffee, it had two Splendas in it and a pump of half-and-half. [I know] because I know him.” In all seriousness, Wright particularly enjoyed Johnson’s composition “lament,” performed by Johnson on the piano and Carlson on the cello. “It’s a lament in the broadest sense of the term.”

After recess, the music took a definite turn for the jazzy: the final two pieces incorporated electric instruments. Johnson’s composition “charles mingus was quite verbose when it came to titles: a contrafact” appeared to have been the most complex piece of the night, incorporating 10 musicians and nine different instruments, one of which was a “six-stringed axe” played by guitarist Jake Goldman. What began as an alluring trumpet solo morphed seamlessly into a mellow jam-out; I had quite some difficulty restraining myself from dancing with the music my seat.

The final piece of the night was titled “forget the herring (take the sardines),” designed to remind Johnson’s audience that “canned sardines are easily portable and are rich in vitamins and minerals.” On that healthy note, and accompanied by Miller Wrenn on “slappa’ da bass” and Shane Sato on an “assortment of cylinders and circles,” Johnson closed his recital with reverberating music I could feel quite intensely in my chest. When the music faded, enthusiastic popping of bubble wrap ensued. It took much encouragement from his fellow musicians and his high-energy audience before Johnson finally took a modest, awkward bow, which only elicited wilder cheering and the popping of whatever bubble wrap had survived the show.