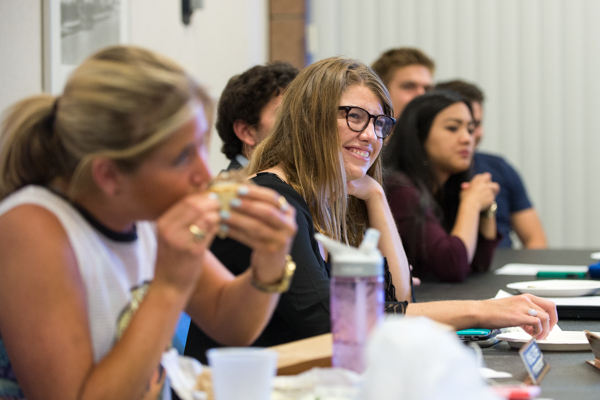 This year’s Senate met for the last time this academic year to go over legislation, including a bill that states that organizations’ funds unapproved for rollover will go to the Finance and Business Committee. Lorenzo Basilio/Daily Nexus

The Associated Students Senate met Wednesday night in the UCen’s Flying A Room to discuss legislation and funding rollovers for campus organizations in the last meeting of the current Senate’s term.

Senate discussed a Bill to Update Article IV Section I of the A.S. Legal Code, which states campus organizations’ leftover funds not approved for rollover to the next fiscal year will move to the A.S. Finance and Business Committee for allocation to related causes. Senate also considered fourteen campus organizations’ requests to roll remaining funding into next year’s accounts, approving ten and denying four.

College of Creative Studies (CCS) Collegiate Senator and second-year CCS physics major Liam Stanton said he opposed the bill because he feels A.S. should use funding not approved for rollover to secure its own budget, rather than be forced to use it on related causes through the A.S. Finance and Business Committee.

“If we did [not pass the bill] we’d have tens of thousands of dollars, sometimes hundreds of thousands, extra and we wouldn’t have to tread water partially every year like we do,” Stanton said. “Anyone in part of A.S. that needed more money could request it and we’d be much more flexible.”

College of Engineering Collegiate Senator and fourth-year mechanical engineering major Jonathan Rothschild said he was concerned the bill does not say what would happen if funds move to the A.S. Finance and Business Committee and remain unused.

“I think there are some holes, specifically when these go into a specific fund for Finance Board; there is nothing saying what happens to them after the year ends,” Rothschild said.

Off-campus Senator and second-year history of public policy major Cassie Mancini said the bill could prevent a “conflict of interest,” because A.S. will not have the option to use money denied for rollover.

“It would be in our self-interest to deny rollovers, but with this we’re actually making sure that they’re put into Finance and Business,” Mancini said.

College of Letters and Sciences Collegiate Senator and third-year history of public policy major Jimmy Villarreal said there could be conflict over how A.S. Finance and Business Committee allocates funds that were denied for rollover.

“I could see some groups that lost their rollover come and disagree with how the Finance and Business Committee used that money, whether or not that money was used for whatever students voted that money to go towards,” Villarreal said.

“Students paid these fees for this year,” Guthy said. “We should not be setting the precedent of continuously rolling over funds, because students pay for funding this year and they need to go to students this year in services.”

After much debate, senate tabled the bill indefinitely.

A version of this story appeared on page 3 of Thursday, May 21, 2015’s print edition of the Daily Nexus.

Your articles generally tend to be boring and lackluster