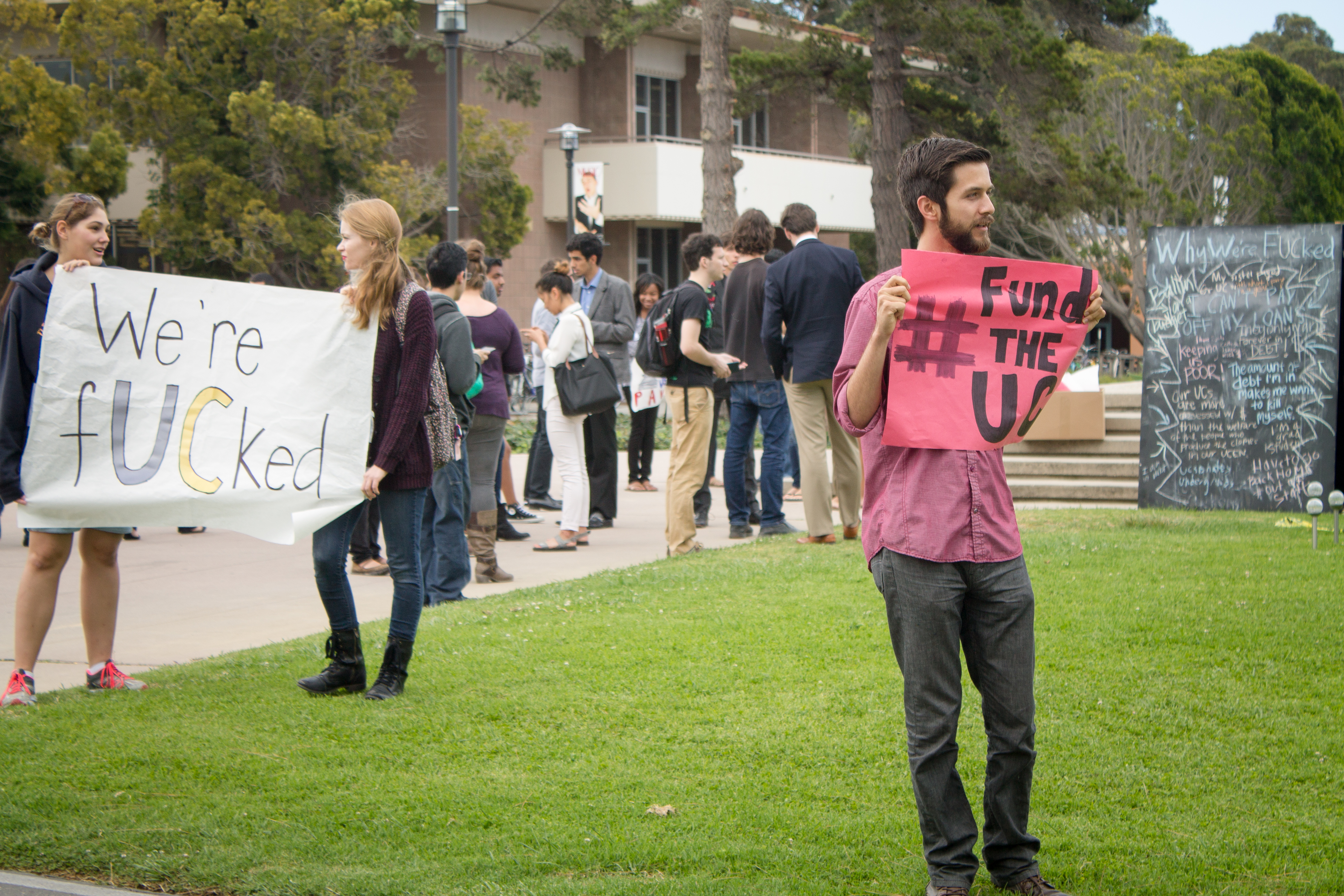 The Associated Students Office of the External Vice President of Statewide Affairs (EVPSA) held a rally in front of Storke Tower on Friday to conclude the week-long “We’re fUCked” campaign to protest the proposed UC system tuition hikes.

​Speakers voiced frustration regarding UC President Janet Napolitano’s proposed Long-Term Stability Plan for Tuition and Financial Aid, which plans to raise tuition by five percent annually for the next five years. Students also criticized Napolitano’s proposed state budget revisal to freeze tuition until the 2017–2018 school year. At the conclusion of the event, attendees wrote individual petitions to Governor Jerry Brown and the UC Board of Regents voicing their frustration on tuition increases.

EVPSA Office Fellow and first-year Asian American studies and political science double major Akshaya Natarajan said the event aimed to “rally voices” and communicate that the suggested tuition freezes are not a sufficient solution to the increasing cost of tuition.

​”The message for this event says that we are still fucked because there are a lot of problems, such as the eight percent increase of out of state tuition and increases for graduate school tuition as well,” Natarajan said. “Tuition freeze is not enough because it will fuck us over in the future if it is not taken care of.”

“This will get students angry because you need an education no matter where you go,” Garcia said. “Your skin color, background, lifestyle, culture, ideals and majors do not matter because this tuition hike will definitely affect you in some way.”

“This is why we invited plenty of news sources to report on this specific event today,” Natarajan said. “As long as we have more momentum and more media, then I deeply believe this will influence more change for the betterment of all students. It is not enough to simply oppose the tuition hikes.”

​Natarajan said students should be angered by the tuition hikes and continue protesting in order to affect change.

“Defunding of the UC is something that anyone should be angered about because, realistically, we are paying more and more for our public education, even though the state should be funding us,” Natarajan said. “We have angered students all across the state.”

​Tuition increases contribute to financial challenges for students now and will continue to do so in their futures, according to EVPSA and fourth-year political science and film & media studies double major Melvin Singh.

“I am starting to believe that school is only preparing me to deal with a bad economy which is full of debts such as the tuition hikes which are fucking us all,” Singh said. “This is why we are still fucked and angry.”

“If you take a knife and stick it six inches deep into a man’s body and pull it out, it is not progress,” Mirza said. “Progress is healing that wound completely. The same thing is happening now because the UC system is pulling the knife out instead of healing the students’ wounds.”

Mirza said Brown and Napolitano do not consider students’ perspectives when raising tuition.

“I think Governor Brown and President Napolitano think it is a good idea to raise tuition because they are not students,” Mirza said. “This is not their university. This is our university.”

“I live in a one bedroom apartment in Isla Vista,” Dela Cruz said. “I have five roommates who live with me, not because they want to, but because the tuition costs leave them with no other viable option.”

“As graduate students and TA’s, we put in hours of hard work by grading hundreds of papers and studying for our own classes,” Jones said. “In turn, we receive debt as a reward which only causes sorrow and leads people to have less confidence in the education system.”

According to Garcia, tuition hikes have a greater impact on students from disadvantaged backgrounds.

“I think it is ridiculous to raise tuition because this will only cause people to be less educated in society,” Garcia said. “It puts people of color at risk of not receiving an education and makes society unreliable as a whole. We need more educated people to make life more efficient.”