The Daily Nexus
News
Talk Encourages Students to Heal, Share Emotions
May 14, 2015 at 5:00 am by Peeka Zimmerman 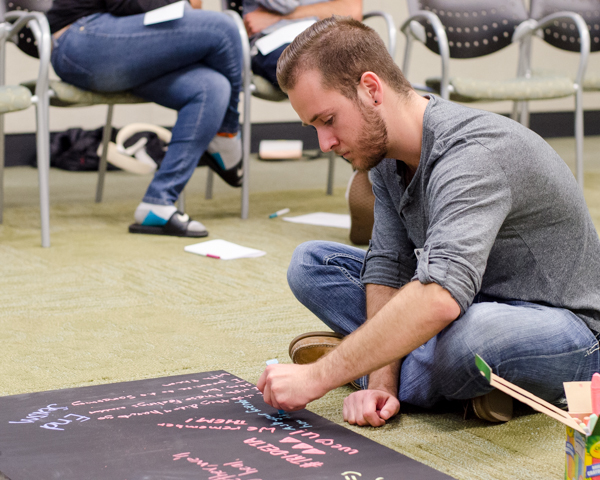 At a discussion that reflected on the events of May 23, students signed chalkboards as symbols of solidarity at “Where Are We Now?” Christina DeMarzo/Daily Nexus

Residence halls Multicultural Awareness Chairs held a discussion Wednesday titled “Where Are We Now?” to explore students’ healing processes following the events of May 23 last year.

The Multicultural Awareness Chairs chose the theme “You Can Sit with Us” to foster inclusive discussion. Counseling and Psychological Services (C.A.P.S.) Training Director Juan Riker led a discussion in which students shared feelings on the upcoming May 23 anniversary and the May 11 Sabado Tarde Road incident. Students signed chalkboards as a symbol of solidarity.

San Rafael Hall Multicultural Awareness Chair and second-year sociology major Curnishia Woodbury said freshman students are often alienated from the rest of the UCSB community because they did not experience the events of May 23 last year.

“There is this empathy gap between us and the freshmen who are new here,” Woodbury said.

According to Woodbury, open discussions are important because they expose how past events continue to affect people’s lives.

“Problems are still here,” Woodbury said. “Spring Quarter last year, it was like everybody said ‘how are you?’ but Fall Quarter rolls around and everybody is back to like ‘Hey, I.V., let’s go party.’ They are still perpetuating the same problems that existed before.”

Woodbury said the group also addressed why society tends to shame men who express their feelings, discussing what it means to be masculine and how society is “perpetuating” a male-dominated society.

“I hoped that people would keep the dialogue going, keep talking about what masculinity means — what does femininity mean?” Woodbury said. “What are we doing here in this I.V. community? Why do we still perpetuate these same norms when we could change it after what happened?”

Women tend to be diagnosed with depression, whereas men tend to externalize versus internalize their feelings. – C.A.P.S. Training Director Juan Riker

According to Riker, attendees discussed how women share emotions more frequently and are more likely to be diagnosed with depression.

“Women tend to be diagnosed with depression, whereas men tend to externalize versus internalize their feelings,” Riker said.

Riker said C.A.P.S. encourages students to seek out counseling services during the week of May 23.

“It is important to stress support and not being alone,” Woodbury said.

Riker said his repressed emotions from the events of May 23 last year may have been triggered by the May 11 Sabado Tarde Road incident.

“Clearly, that shook all of us — just wrapping our minds around that happening again,” Riker said.

“The purpose of the chalkboards is to distribute them, have one be in San Rafael somewhere and the other one be in Manzanita by the central front desk it and if not give it to OSL [Office of Student Life] and then OSL would choose to place it somewhere on campus,” Anyiw said.

A version of this story appeared on page 1 of the Thursday, May 14, 2015 print edition of the Daily Nexus.