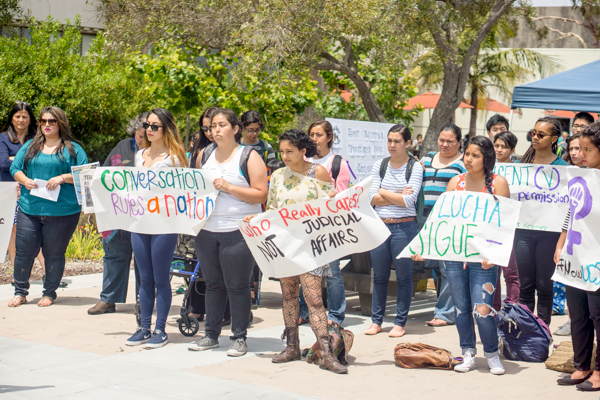 Students, staff, faculty and other community members gathered Wednesday to stage a sit-in Chancellor Henry T. Yang’s office on the fifth floor of Cheadle Hall, issuing a list of demands asking the administration to reform policies and procedures for punishing sexual assault perpetrators and supporting victims.

At a rally in the Arbor preceding the sit-in, three sexual assault survivors including second-year Chican@ studies and history of public policy double major Alejandra Melgoza, first-year art history major Lacy Wright and fourth-year sociology major Melissa Vasquez, shared stories of their experiences, reporting that they had been sexually assaulted to the Office of Judicial Affairs. All three women believe their cases were not given sufficient attention and were handled poorly by university administration.

A crowd of over 100 students gathered in the Arbor to hear the students speak, and approximately 50 joined them in the sit-in. Yang was not present in his office, so various administrators involved in sexual assault policy heard the demands of the students coordinating the sit-in.

Vasquez said the perpetrator in her sexual assault case was found guilty by the Santa Barbara County Court of Law, but will still be allowed to walk at his graduation commencement on May 13.

“He got found guilty by the court of law before we started the school year, and the school knew that, and they still offered him university housing across the street from me,” Vasquez said. “Nine months after the school had known, they only gave him a one-quarter sanction, which was this quarter, and they are still allowing him to graduate next year.”

Chican@ studies Professor Denise Segura said she is disappointed in how the institution for which she works does not provide services that protect students.

“One of these students who is in my class came to me and I did what I am supposed to do: I referred her to the right people and these right people did not protect her the way I think she should have been protected,” Segura said. “I am ashamed, ashamed to be a tenured faculty of this institution that allows this to happen and I deeply apologize to these women.”

Isla Vista United Methodist Church Reverend Frank Schaefer said by attempting to silence sexual violence cases and criticism of the administration’s policies, the university will only make the situation worse for all parties involved.

“We are calling on the administration, on school officials, on faculty members, to please take this very seriously,” Schaefer said. “Sweeping things under the rug is never going to be good for the future and if you wanted to address this issue and correct it and restore justice and security for students and any member of this community, you need to face this issue head on.”

The students demanded mandatory educational workshops on consent and relationships, increased diversity in the Judicial Affairs staff, increased funding to train support staff for sexual assault survivors, free mental health services for survivors, better handling of sexual assault cases, monetary compensation for survivors in past cases that have been mishandled, immediate suspension for more than two quarters and bans on housing, employment and other privileges for convicted perpetrators, among other demands.
Vasquez said she wanted UCSB to instate a minimum penalty for students found guilty of sexual violence.

“There is not a minimum consequence for those convicted of sexual assault, it could be a one-quarter suspension,” Vasquez said. “One or two quarters have been the most a student has gotten.”

According to Vasquez, UCSB currently has harsher penalties for plagiarism than for sexual assault.

“For example, if a perpetrator is found guilty, they are not immediately suspended,” Weyrick said. “They’re allowed to finish off their quarter, which is disgusting.”
Melgoza said she wants administration to follow through on the no-contact order brought against her perpetrator.

“I know it doesn’t move fast enough for you, but we are looking at minimum sanctions for different kinds of events, assaults, and I think the area has come to our attention and we are moving as quick as we can, which is sometimes very slow in the scheme of things,” Lombardo said.

Senior Associate Dean for Student Life Debbie Fleming said administrators have already discussed implementing some of the policies the sit-in demands, such as mandatory preventative education.

“Several of the things on the list we already have in place so it would be an opportunity for us to talk with students about it, helping them understand what we already have in place,” Fleming said. “We were already just having a conversation in there about some of our mandatory education and we would like to get student input into getting it more effective.”

Melgoza said the process to sanction sexual assault offenders needs to be faster in order to allow survivors to heal and focus on their lives as students.

“How am I going to focus on my studies and my education if I keep seeing my perpetrator every single day?” Melgoza said. “My perpetrator was supposed to be suspended this spring, yet he is here.”

Vasquez said she and three other sexual assault survivors demand funding for transportation and board to travel to the next Board of Regents meeting on May 20 and speak to UC President Janet Napolitano and Governor Jerry Brown in public forum.

“They’re meeting in a couple weeks, so we want traveling funds for that and also to have a spot to speak because Governor Jerry Brown and Janet Napolitano do show up but they walk out on comments,” Vasquez said.

According to Vasquez, students participating in the sit-in demand a meeting with Yang and financial compensation for the hardships they have experienced at UCSB.

“I also want the school to develop an education intervention program for those who are found guilty of sexual assault, and they are not allowed to receive their degree until that process is done” Vasquez said. “Being a Gaucho is an honor, and that should not be given to offenders of sexual assault.”

“It’s very unfair these responses coming especially from women,” Vasquez said. “Telling us that it was ‘bad sex,’ and that we ‘need to get over it,’ and that ‘how should they have known that’s not what we wanted?’”

Weyrick said the administrative efforts to address sexual violence need to work to include students.

“Me and Alejandra only sit on the Sexual Violence Subcommittee because we heard about it through Ali Guthy since we’re execs in Take Back the Night,” Weyrick said.

“Students aren’t able to lend a voice; it’s a bunch of administrators sitting in a room.”

Fleming said she hopes a small group of representatives from the sit-in will have an opportunity to speak with Yang about the list of demands, but that he was “on the road” and difficult to reach.

“At this point they would very much like to meet with the Chancellor face to face,” Fleming said. “I’m hoping that can be scheduled. We’re having a little bit of a problem reaching him.”

Segura said she hopes Yang listens to the sit-in’s demands and takes initiative on speeding the process to implement better policy.

Wright said the university “systemically” turns its back on sexual assault cases, leaving survivors to seek justice through their own activism.

“Despite all the trauma, all the suffering that they had to endure, they are the ones that have to stand up here to be judged, to be interrogated, to be questioned,” Wright said. “It is time for this to end.”

“I think the chancellor should listen to our demands because the tactics are only going to escalate,” Mirza said.

Associated Students President and fourth-year sociology and psychology double major Ali Guthy said she was glad to represent A.S. at the sit-in.

After sitting in Yang’s office for 10 hours, students were able to meet with the Chancellor to discuss demands. Updates to follow.

A version of this story appeared on page 1 of the Thursday, May 14, 2015 print edition of the Daily Nexus.