The Daily Nexus
Sports
Four-Star Recruits Set to Join Santa Barbara
May 14, 2015 at 5:00 am by Martin Cobos 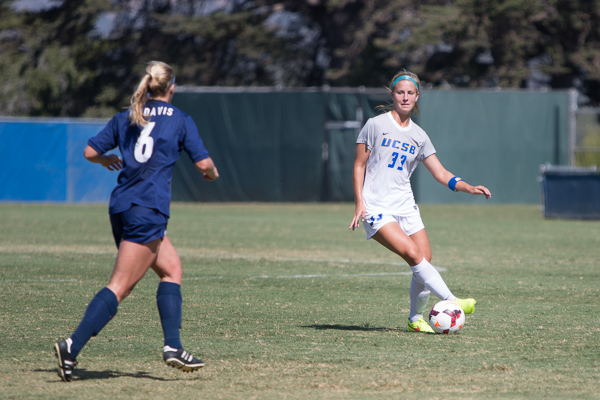 The UCSB women’s soccer team has signed 10 high school athletes to National Letters of Intent, and the team has also added a transfer from the University of Colorado for the upcoming season.

UCSB finished the 2014 season with an overall record of 8-9-2. A tough four-game losing streak to close out the season landed the Gauchos in last place in the Big West standings with a conference record of 2-6.

“We are very excited for the future of our program,” Head Coach Paul Stumpf said. “This class was put together very purposefully to make sure that our new recruits are what we call ‘both-and’ players. That means they have both ability and character.”

With six seniors departing and 11 new recruits, the Gauchos will have a host of talent to choose from this upcoming season. Leading the new freshman class is attacking midfielder/outside forward Jessica Clegg.

Not far behind is center midfielder and four-star recruit Maddie Gibson. Gibson is ranked 53rd nationally and is fifth in the Northern California/Hawaii region. While playing at Monte Vista High School she was named East Bay Athletic League Player of the Year in 2011-2012.

“Maddie plays both attacking and holding center midfield for her club and high school teams, and that is where we see her playing for us,” Stumpf said. “She is technical, intelligent, can score goals and create with her service.”

Rounding out the list of incoming four-star recruits is attacking midfield/forward Mallory Hromatko and left back Ryan Kokoska. Hromatko is ranked sixth in the Northern California/Hawaii region and scored 25 goals and 24 assists while attending Monte Vista High School.

Kokoska is ranked 37th in the Great Lakes region and attended Carmel High School. There she helped lead the team to four MIC championships and, as a freshman, she was part of a Carmel team that went 22-0-1 and won an Indiana State Championship.

Also joining the team this season will be forward Hannah Dearborn. Dearborn played a total of 24 matches while attending the University of Colorado. She attended Moorpark High School where she was selected First Team All-CIF, Team MVP and First Team All-Ventura County as a senior in 2013.

“Hannah is a very dynamic forward who will bring to us the ability to stretch teams out,” Stumpf said. “If we can deliver some balls in behind opposing defenses, she is going to get on the end of it and go one-versus-one with their keepers.”

Young talent will also be returning for the Gauchos with current freshman midfielder Chace Schornstein and sophomore center midfielder Sara Feder. Schornstein was named to the league’s all-freshman team last season, and Feder was on the Honorable Mention All-Big West Conference list.

A version of this article appeared on page 11 of May 14, 2015’s print edition of the Daily Nexus.