The Daily Nexus
News
EVPSA Office Congregates in Support of ‘We’re fUCked’
May 14, 2015 at 11:20 am by Alyssa Schmidt 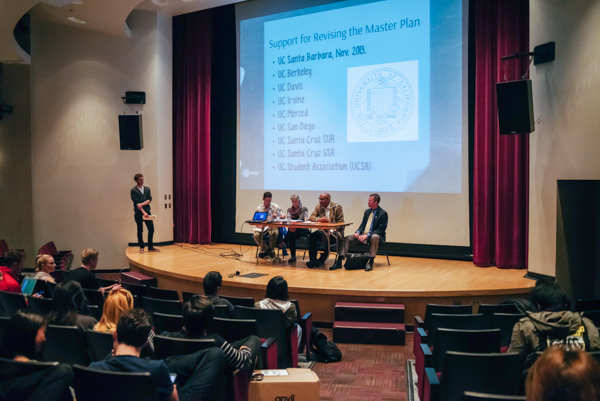 The UCSB External Vice President for Statewide Affairs (EVPSA) office held a panel discussion and question and answer session in the MultiCultural Center on Thursday as part of the week-long “We’re fUCked” campaign to protest the proposed UC system tuition hikes.

On Thursday, UC President Janet Napolitano announced that Governor Jerry Brown and the UC agreed on a revised state budget proposal titled “May Revise,” which will freeze UC tuition for the next two years. Graduate and undergraduate students, Office of Financial Aid representatives, professors, KCSB staff members and Associated Students (A.S.) attended the We’re fUCked discussion, addressing issues regarding tuition hikes and how the May Revise will affect students.

Though tuition is now frozen for in-state students over the next two years, tuition for out-of-state residents will increase by eight percent per year, according to UCSB Director of Financial Aid and Scholarships Michael Miller.

“Every student pays the mandatory UC tuition, which is $12,192,” Miller said. “Non-residents supplemental tuition is an additional $24,000 on top of that. Eight percent is definitely not good news for out-of-state students, and we can’t give out-of-state students any more financial aid than we do our California students.”

According Miller, UCSB has the highest campus-based fees of all the UC campuses with a total cost of $25,836 for a student living on campus, $12,192 of which is for tuition.

“Our campus-based fees are $1,673 — that is certainly concerning,” Miller said. “One of the other fees that’s really concerning is the Gaucho Health Insurance, which is over $2,700. Just a few years ago, it was $1,375, so that’s been a massive, massive increase.”

Miller said while about 70 percent of UCSB students receive some form of financial aid, UCSB should allocate more money for scholarships.

“One area we really need a lot of work on is scholarships,” Miller said. “We only administer about $13.2 million worth of scholarships and, of that, $4.1 come from outside agencies.”

Gevirtz School graduate student of education and co-host of KCSB’s “Radio Occupy” Kathy Swift said the 2008 market crash created a “tuition crisis” of trillions of dollars in student debt, the highest of any single consumer debt within the U.S.

Swift said the debt students are accumulating while obtaining higher education is negatively affecting their daily lifestyles, which goes against the “American Dream.”

“Students are so desperate that we have to provide food banks for them, and some students are living out of their cars and in less-than-good housing situations,” Swift said. “This is madness.”

According to Swift, the tuition crisis the millennial generation is facing stifles upward mobility because many cannot afford to pursue a higher education.

“The mission statement of California says we should all be guaranteed higher education,” Swift said. “That’s not really the case anymore. That social contract is gone now.” 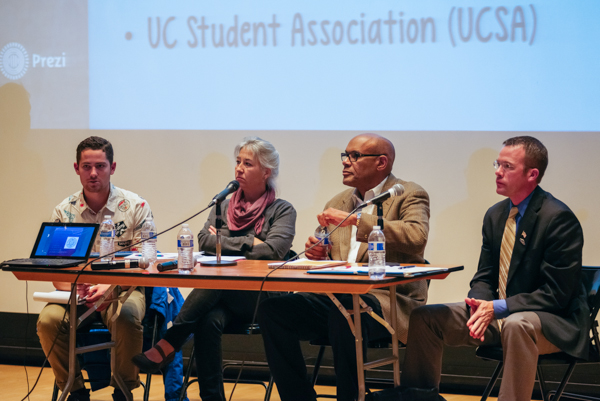 UCSB Chair and professor of black studies Jeffrey Stewart said the education policy has been changed to outsourcing universities while increasing funding for prisons.

“The idea of neoliberalism has taken over to where everyone is now looked at as a private corporation,” Stewart said. “The larger dynamic is taxpayers in the state of California no longer think your education is worth their tax dollars. They feel more comfortable paying for prisons to lock up people.”

Stewart also said the decision to stagnate tuition for two years is only a temporary solution to satisfy student concerns, and problems will still be present at the end of the freeze.

“Freezing the tuition for two years only allows for the activists to graduate,” Stewart said. “It also leads you to believe that the current situation is acceptable, but it’s not. Where can we begin to organize to put political pressure on those who make those decisions?”

“Before this tri-party system, universities were a free-for-all, competing against one another for the funds the state could give them,” Daniels said. “So in 1960, the UC President and state government came together and passed what was known as the ‘master plan’ which established the three-party system based on accessibility and quality.”

According to Daniels, the master plan did not provide long-term sustainable resources for revenue, and President Regan’s economic policies required students to pay for education as opposed to the government providing public education.

“We were just always hoping that California taxpayers would be willing to pay higher taxes for the system and we always figured the politicians would find the money,” Daniels said. “But obviously that’s not quite the case.”

“We’re admitting more and more of them into our schools each year,” Carpenter said. “That’s because we get a lot of money from them and the out-of-state tuition goes straight to the campus. There is a very identifiable incentive to take more of those people.”

According to Carpenter, privatization of universities devalues a Bachelor’s degree, making it difficult to get a job after graduation, which incentivizes students to pursue post-undergraduate education.

“The UC really has no interest in getting you a job after graduation,” Carpenter said. “Why? Because you can come back and pay them for a Master’s degree. They want to provide us with the lowest cost education they can while extracting from us the most money.”