The Daily Nexus
On the Menu
Fork Fest: Where the Forking gets Real Tasteful
May 13, 2015 at 5:00 am by Audrey Bachelder

When it comes to being a foodie, Santa Barbara is a real culinary playground. From the challah bread Kahlua-drenched French toast at Jeannine’s to the Bangkok street noodles at Empty Bowl Noodle Bar in the SB Public Market, savory bites abide in every downtown nook and cranny. But unless you eat at Lilly’s Tacos every weekend, the foodie life tends to be an expensive one. Thankfully for the penniless taste tester, Fork Fest comes to town every so often at Chase Palm Park and sets up SB’s finest eateries in a day party setting. For $30 — or $55 if you waited until the day before (silly procrastinators) — attendees at the food gathering on Saturday, May 9 got eats from 20 booths, a nice sampling of what Santa Barbara has to offer.

The goal of Fork Fest is a particularly indulgent one; each eatery creates their best forkful of food in an attempt to win the Golden Crown. In the process, Fork Fest brings together a bunch of sophisticated restaurants, pours in a horde of brewery stands and allows the au courant food observer to get their munchie on in an eco-friendly, all-you-can-drink way. The concept is equally cool. Everyone is allowed one fork and one cup, and each booth provides their food in a biodegradable container made to sit in the cup, allowing it to become the ultimate vehicle. 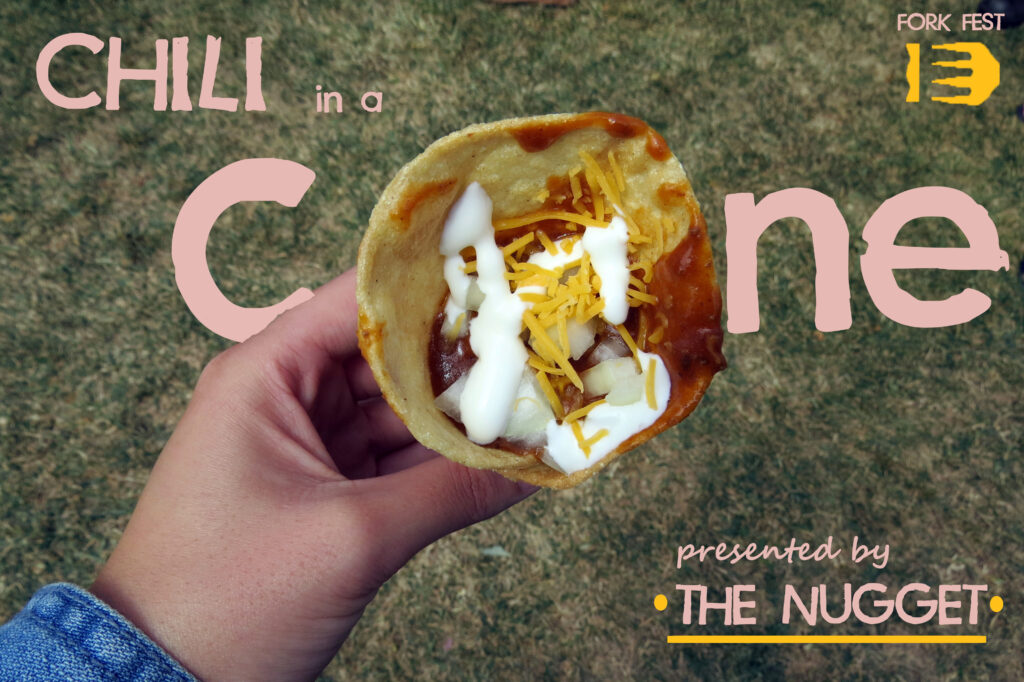 Fork samplings varied from the farm to the sea. The Nugget, a red barn western-style eatery by the Trader Joe’s on Calle Real, provided chili con carne. Tender beef mixed with south-of-the-border spices created a tasty snack that was not overwhelming. Twenty yards away, Belcampo Meat Co. had chili that was of equal hearty splendor, with a bit of jalapeno (and sausage slices if you got a lucky cup). But when it came to presentation, The Nugget blew the neighborhood butcher shop out of the water. The Nugget’s chili came in a tortilla chip cone, warm and toasted with strings of cheddar cheese and sour cream adorning the top. It was the perfect ensemble, light and crispy and fun to eat.

Chuck’s Waterfront Grill brought a clam chowder that was fit for Poseidon himself. Not too watery and not too thick, the soup was the perfect consistency. Soft potato cubes a centimeter thick disintegrated into mouths upon entering, mixing nicely in with crispy bacon slivers. The bacon was smoky — applewood bacon, no doubt — and made the entire thing utterly divine for those who prefer the porker’s fatty delicacy. 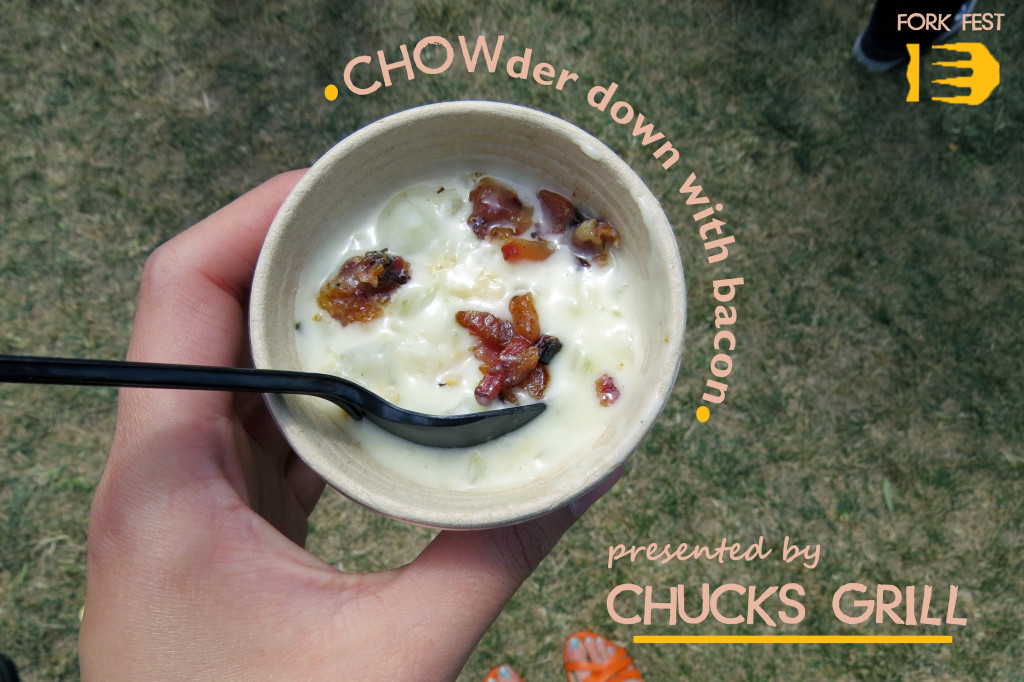 But the best part was the clams. My god, those were the freshest clams I’ve ever had in chowder. The tender, orange flesh ripped apart between incisors in an easy flourish, inciting a subtle taste of the sea. The saltiness was immediately followed by a rosy, smoky flavor from the bacon. Eating Chuck’s clam chowder was like taking a shot of tequila — delicious, salty and leaving warm fuzzies in the belly.

Long lines held out at the pulled pork and taco stands, but these did not overwhelm my taste buds. Perhaps it was because the portion at the end of the waiting period just seemed too darn small, but neither lent itself to any kind of mouthwatering activities. (Seriously though, the taco had four teeny-tiny pieces of adobada. What the guac!? I admit it, I’m spoiled. I’m used to Lilly’s and their heaping, generous, adobada portions. But a measly four pieces? No, sir. That’s not how a taco is done. No way.)

One item that was small, but did produce a big flavor, was Santa Monica Seafood’s Ahi tuna. Three cubed pieces of raw tuna were doused in a ginger-sesame sauce and garnished with a crispy cracker. It was simple, yet delightful. Then again, it is pretty difficult to screw up on raw fish. 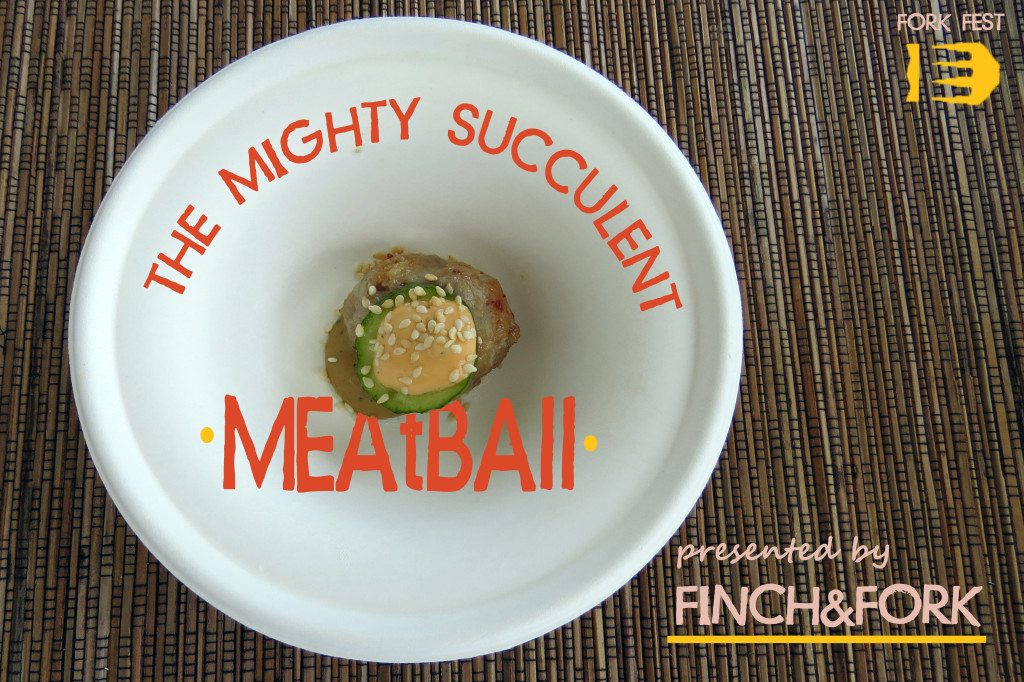 But the greatest taste of them all was Finch & Fork’s meatball. The hip hangout known for its Casino Royale-style cocktails and dedication to locally-sourced ingredients came onto the scene with a meatball that made every taste bud dance. Ground shrimp and beef (or was it turkey? I was too happy eating it to notice the protein) melded together in a succulent ball, just the size of a mochi ice cream ball and perfect for popping into your mouth.

Atop the meatball lay a cucumber, and atop the cucumber was a dollop of ginger peanut sauce which was equal parts creamy and spicy. Sesame seeds decorated the tasty morsel in an aesthetically pleasing way. The bite into the meatball was joyous — oh so splendid — as the spice from the peanut sauce shot to the back of your throat, only to be overcome by the delectable shrimp flavors and ultimately cooled off by the cucumber. It was built with precision, and fulfilled Fork Fest’s mission: to create the perfect forkful that leaves the mouth salivating and yearning for more.