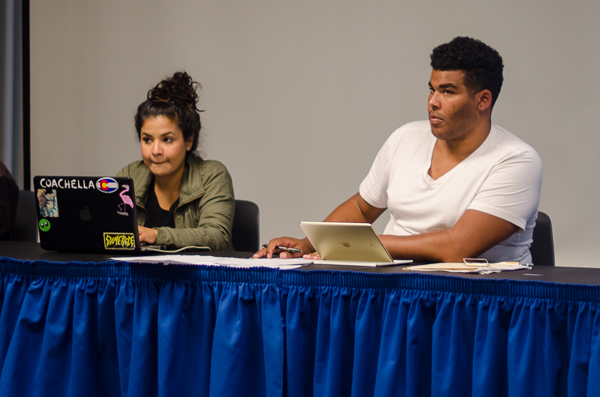 The Associate Students Finance and Business Committee met Monday in the UCen’s State Street Room to hear funding requests from five campus organizations, two of which it granted.

Black Grad representative Jasmine Moses requested the $3,250 the committee previously granted the organization to fund a keynote speaker be reallocated for degree covers, paper to print certificates, flowers, a cake, UCen catering services, use of Campbell hall, a balloon arch and cocktail tables.

According to Moses, the organization had to request reallocation because university policy prohibits private groups from paying faculty members to speak at graduation events.

The committee reallocated $2,300 of Black Grad’s funding and suggested the group request further reallocations at a later meeting.

P-Grad requested $2,570 to fund a dinner for 23 graduates and their guests, a speaker and transportation for the organization’s graduation event.

A P-Grad representative said the organization has been fundraising, but would like help from the committee.

“We have a lot of fundraisers this quarter,” the representative said. “We had one last week and we have two more, so we are trying to fund programs ourselves, so it would just be a big help.”
The committee granted P-Grad’s request.

The UCen requested $700 to fund labor for UStudy Center, the UCen’s extended hours and services during dead week and finals week.

According to a UCen representative, the UStudy center needs a service manager and service assistant on shift earning $10 per hour from 9 a.m. to 1 a.m. to oversee special services throughout the UCen property, such as review sessions and free massages.

“In order to be able to do this for our students, we need to be able to have our staff here at that time,” the representative said.

The committee denied the UCen’s request.

Ostromogilskaya said the event would include discussion on cultural appropriation surrounding Cinco de Mayo, even though the holiday has passed.

“It’s usually a little closer to Cinco de Mayo,” Ostromogilskaya said. “This year since it’s after we’re still going to reference it and talk about Cinco de Mayo and its actual history and cultural appropriation and what that is and how people within the community feel about it.”

Riahi said the organization would plan an alternative gathering if it cannot fund a catered dinner.

“We usually do dinner, but if we don’t get the money we could always do Persian sweets and tea,” Riahi said.

Financial officer Austin Kang said the committee should not fund the group out of funds allocated for Culture Weeks and Graduation because they are not planning an event as part of a culture week.

“If it’s not part of a weeklong event or if it’s just like a one-day celebration, it shouldn’t come out of Culture and Grad,” Kang said. “I looked at the Legal Code, and it said it was for cultural, weeklong events.”