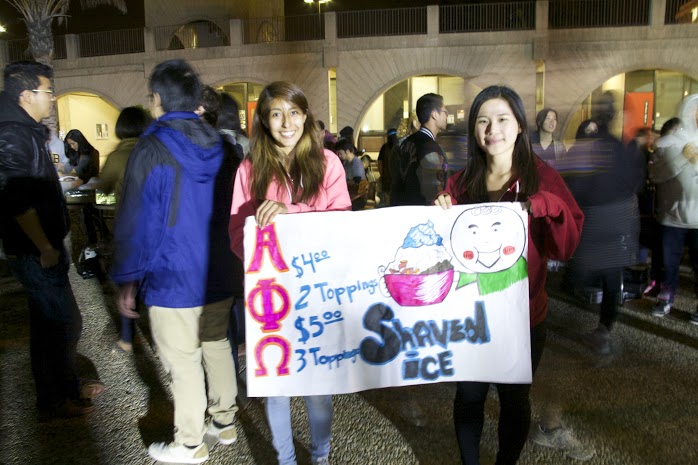 One of the few complaints about the Night Market was the lack of light. As a result, visual evidence from the event is scarce. Luckily these ladies from Alpha Phi Omega staid still enough for this shot. Lianna Nakashima/Daily Nexus.

Rather than going out and partying on a Friday night, many UCSB students decided to attend the Taiwanese American Student Association’s (TASA) 10th annual night market at Storke Plaza. This is the biggest event that TASA throws with the monetary support from After Dark, Community Affairs Board (CAB) and TECO. Help from student organizations like Hong Kong Students Association (HKSA), Korean American Student Association (KASA), Kapatirang Pilipino (KP), Japanese Language Cafe (JLC), Alpha Phi Omega (ΑΦΩ), Alpha Kappa Delta Phi (αΚΔΦ), Zeta Phi Rho (ΖΦΡ) and Seoul’d Out allowed the night market to have a variety of student cultures and backgrounds. To honor the traditional Taiwanese markets, these student organizations offered an abundance of food and games well into the night to satisfy people’s appetites and gaming needs.

Differing from the more well-known and well-established night markets thrown in Downtown Los Angeles, Orange County and hundreds of other locations, this event had free admission. Characteristic of most night markets, the event required attendees to purchase tickets for the food vendors at $1 each. However, if you purchased pre-sale you would be able to receive a slight discount by paying $10 for 11 tickets and $20 for 23 tickets.

The student organizations had a wide variety that could satisfy the vegetarians and carnivores alike with the crowd favorite popcorn chicken, pan-fried green onion pancakes, dumplings, potstickers and the beloved variety of milk teas with boba. The popcorn chicken proved to be popular through the long line of students. The small pieces of chicken were perfectly crispy without the excessive oiliness. Although they were underseasoned, the crunchy texture made up for the lack of spices. The pan-fried green onion pancakes are reminiscent of a pancake that is thinner, crispier and not as fluffy compared to your traditional American pancake. You could choose to add an egg for an extra ticket or Sriracha to add an extra kick. Similar to a boiled egg, TASA offered tea eggs that were boiled in tea, as implied by the name, rather than water. The taste was quite salty in comparison and harder in texture. The outer egg white shell was a darker color — a result from boiling in tea.

Many students I saw were walking around with cups of boba. Some even argued that their boba was better than one of the few Asian eateries in Isla Vista, Hana Kitchen. (One of my friends joked that the “boba could break her teeth because it’s so hard.”) Compared to this well-known I.V. favorite, most attendees agreed that their milk teas were better because they were not overly sweetened or out of proportion with the half-and-half to tea ratio.

Continuing the traditions of a Taiwanese night market, TASA invited student performing groups like UCSBreakin’, Vocal Motion, Urban Dance Company, Naked Voices and TASA themselves for entertainment. The audience faced the UCen while the performers were set on the ground in front of the large set of stairs. The lack of lighting and sufficient sound for the music was quite distracting and made it more difficult to enjoy the performers. But from the countless hours of rehearsals, the performers stood their own despite these technical setbacks.

The main complaint organizers and attendees alike expressed was the lack of light. Given that this was a night market, it is understandable that the light must be artificial. However, there were only a few large light stands that towered above, almost blinding people from their brightness. Despite the blinding towers, students of the organizations struggled to see what they were preparing or cooking for guests and resorted to using their phone flashlights as a better source of light. I also struggled with the lighting because my DSLR does not have a flash, so my photos often came out too dark and blurry.

Overall, TASA accomplished an event that united the student body with food, games, fun and entertainment. Although the technical aspects lacked, the unity of the community from student organizations showed how UCSB appreciates all cultural backgrounds.