The Daily Nexus
News
Cupp Discusses Freedom of Speech
May 8, 2015 at 12:46 am by David Jackson 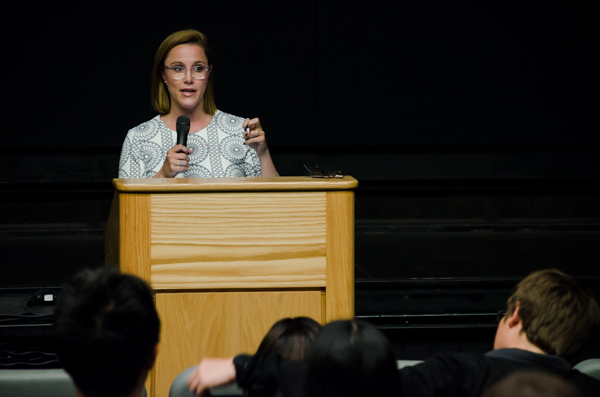 Conservative commentator and New York Daily News writer Sarah Elizabeth Cupp spoke about the importance of freedom of speech and the political culture surrounding it to students and community members at Isla Vista Theater Thursday evening.

Hosted by the UCSB College Republicans, the talk focused on controversial interpretations of what qualifies as free speech and what qualifies as hate speech, particularly on college campuses. Cupp explained her transition from a liberal in college to a conservative later in life, articulated her positions on everything from trigger warnings to feminism and finally held a Q&A session.

Cupp said her preconceived notions of Republicans and the prevailing negative stereotypes associated with the party did not match her personal experiences.

“Republicans, I had learned from popular culture, were greedy, racist, sexist, dumb, warmongers, crooks and liars,” Cupp said. “This was before George W. Bush even came along — and I of course was none of those things.”

Cupp said the incident in which feminist studies Professor Miller-Young attacked a pro-life 16-year-old demonstrator last year indicated that liberal progressives did not support the principles of free speech.

“When college professors of all people think it’s appropriate education to steal and tear up the sign of a peaceful protestor, regardless of what they are protesting, you know that progressives have totally abandoned their one-time commitment to free speech,” Cupp said.

Cupp said she felt the effort by UCSB students to provide trigger-warnings to students for graphic content pertaining to sexual assault and extreme violence was “insane” and unrealistic.

“It only sounds somewhat legitimate because you’re living in it, but to anyone in the real world that’s insane,” Cupp said. “I mean there’s no threat that you’re going to cause me to cause myself physical harm … with something you say. The fact that people buy this is crazy.”

Cupp said American society has developed with the primary goal of not offending any individual.

“We have become a society that aims to offend exactly, precisely, no one,” Cupp said. “If one person is offended it’s too much. That’s crazy.”

Third-year political science major Jason Garshfield said he supported every point made by Cupp, but that he would have preferred a larger audience at the event.

“I think she’s on to something big and I agree with everything she said,” Garshfield said. “I do think it’s somewhat limited in the fact that everyone here from the Republicans is aware of the problems she’s talking about and what we need to do is not just come together and talk about them, but to come together and find solutions to them.”

Fourth-year political science major Alice Gilbert said the event’s purpose was to remind students of the importance of universities as bastions of free expression.

“It’s important for students to remember that the university setting is possibly the freest place of thought that exists,” Gilbert said.

Local resident James Barton said he appreciated an opportunity to listen to a different political perspective.

“I think she was here to share her opinion of freedom of speech and deliver her point of view. Maybe it wasn’t what we all agree on, but it was nice to hear it,” Barton said. “Working at such a liberal outlet where she works, it’s great to hear.”

It’s about time another perspective is being shared on UCSB Campus. College now a days is no longer about exposing students to a variety of ideas so that they may understand the entire spectrum of philosophies in the world. It has become about shielding them from the realities of the world and indoctrinating them with one ideology. Hats off to the College Republicans for being the only group on campus attempting to change this trend.

There’s some serious double standards going on here. 1) she condemns people for generalizing Republicans as a whole based on some then turns around and uses miller young as an example as to prove that liberal progressives don’t respect free speech even though 1b) a woman in the south has been applauded by many conservative media stations or conservative leaders for stealing an American flag from protesters at another college because as a veteran (who by the way was dismissed for disrespecting the flag herself) she couldn’t stand their disrespect. And 2) Cupp has appeared on news stations where a… Read more »