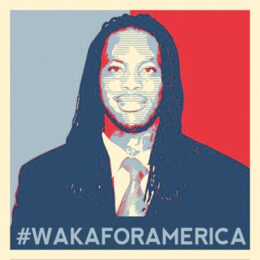 Well, the tragic news is out, people are trashing their campaign signs, putting the caps back on their spray paint cans and undreading their hair: Waka Flocka Flame is only 28 years of age and has multiple felonies to his name illegitimating his candidacy in the 2016 presidential race.

On April 20, in an exclusive interview with Rolling Stone, Flame gave us the false hope of supplying the nation with endless marijuana. Why did you lead us on, Flocka? Why?! Flame announced his intention to run on 4/20 stating, “I’m very pleased to announce today, on 4/20, the best day of the year, I will be running for president.”

He then followed up the initial interview by gaining signatures from supporters on the streets of New York the next day. Judging by his actions and words like, “This is not a joke. I’m super serious. I’m running for president,” it really did seem as if the United States of America was finally going to find its savior.

Although the news of his ineligibility was anti-climactic, it left many wondering, how would our country really look if Flame became Commander-in-Chief in 2016?

Flame was born and raised by the streets of Atlanta, Georgia; surely his simple and honest ideas would be the kind of progressive action our country needs. In order to judge a man one must look at his thoughts, words and actions. Judging by Flame’s track record he seems to be an intense freedom fighter. Flame definitely believes in legalizing drugs; that has been established very starkly, but he also believes in the right to bear arms.

Flame is somewhat of a radical and an activist for the issue, (either that or he’s missing part of his brain) because on Oct. 10 of last year Flame was arrested for carrying a gun through airport security. His representative said that Flame accidentally grabbed his fiancée’s bag because they were in the process of a move and everything was “mixed up.”

But I don’t buy one bit of it. I would venture to say that this was a tactical maneuver to illustrate the lack of freedom Americans now have in an effort to position himself as a man that not only stands by his word, but one that has a rap sheet to prove it. Flame was then arrested later this year after police raided his home and found — you guessed it — more guns and drugs!! This guy is literally a saint, like Nelson Mandela, Jane Fonda and Edward Snowden rolled into one awesome activist blunt.

Hillary Clinton isn’t going to get herself locked up in protest for your lack of freedom; she’s stuffing her turkey with fat checks from Goldman Sachs, but W.F. Flame will fight for you again and again.

Could you imagine having endless weed? Do you know how awesome everyone and everything would be? Take a chance! Live for the moment and dream of a Waka Flocka Flame’s utopia. Squad! #Flockaforpresident

WAKA FLAKA FLAME IS THE BEST PRESIDENT IN THE WORLD!!!!!!!!

Many teachers and college professors couldn’t write on this topic as well as you have. This is amazingly great work. I’ll have to share this.