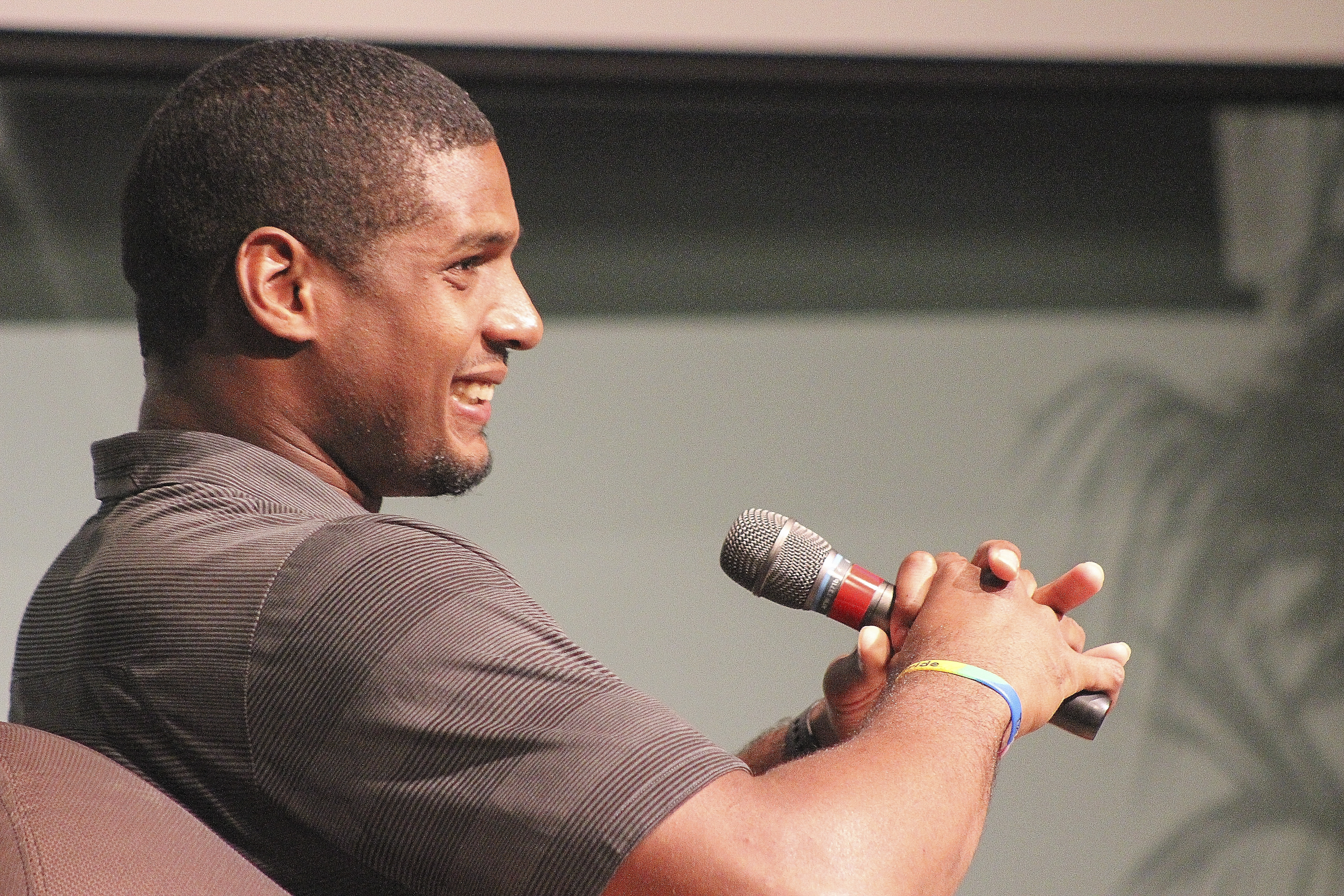 The summer before the start of his senior season at the University of Missouri, Michael Sam gathered around his teammates during practice. This was before Sam — a defensive lineman and a leader on the team — knew his name would be listed on NFL draft boards at the season’s end after a breakout year.

“I came up to my team and told them ‘Hey, I’m Michael Sam, I’m from Hitchcock, Texas, my major is Sport Management, and I’m gay.’ That was the first time I ever said I was gay,” he revealed.

With that announcement, Sam set himself up for being the first openly gay player drafted into the NFL. Monday at Corwin Pavilion, he discussed his upbringing and coming out process in an event hosted by UCSB Resource Center for Sexual & Gender Diversity.

Growing up as the seventh of eight children in the Southeast Texas town of Hitchcock was not easy for Sam. His family name was synonymous with trouble in the area. Two of his siblings died before he turned six, and one was shot down trying to rob a house. Two more brothers spent time in prison and one went missing in 1998.

“They abused me daily and got to the point that I wasn’t safe at home,” Sam said of his brothers’ treatment towards him. “So I would always leave my house at odd hours. I would take long walks. It was very difficult for me.”

His relationship with his parents mimicked a similar disconnect. Sam’s mother did not want him playing sports, leading to discord between the two. His father was in and out of his life. He discussed he originally wanted to come out to his parents at his graduation, but for some reason, backed out.

When he did finally tell them, Sam had the impression his mother already knew, while his father did not say much. “He just went to the bar and got drunk,” Sam added.

As he dealt with sexuality in his teen years, Sam found love in college. The image most associated with Sam is with his fiancé, Vito Cammisano, right after the St. Louis Rams drafted him in the final round of the NFL Draft. Cameras captured the couple embracing in a heartwarming hug and kiss. In January, Sam proposed to Vito on the couple’s trip to Rome on the same day as Sam’s birthday.

Sam and Cammisano’s relationship wasn’t always a love story from the start. In fact, there was dislike for one another when they first met. Sam approached Cammisano at a party his freshman year, asking Cammisano if he was okay after noticing him hunched over almost as if he was about to vomit.

“I said ‘Hey, are you OK?’ and Vito slowly looked up at me and said ‘Get away from me,’” Sam said. “I lost it. I don’t care who you are, you don’t disrespect me to my face. So I actually didn’t talk to Vito for two years.”

It wasn’t until Sam decided to approach Cammisano at a bar that romance between the two ensued.

“I bought him a drink and put my hand on his back and the rest is history,” Sam told the audience.

Their relationship, however, took a turn for the worst. Fear of living in a small college town with the pressure of being a star player on the football team made it impossible for Sam to come out publicly; he wasn’t ready.

Cammisano was already out and grew tired of not being able to be seen in public with Sam. The two broke up because of it.

“We couldn’t go out together, we had to have our friends there and I had to be separated,” Sam said. “Eventually, we started fighting and it got really hard for us. Vito said he couldn’t do this anymore; this isn’t healthy for us.”

Months passed, but the two got back together and have been with each other ever since. It was Vito who gave Sam the courage to come out. Many felt Sam gambled by coming out right before the draft because of possible discrimination he might face from NFL teams. Nonetheless, the Rams selected him with the 249th pick in the draft.

While with St. Louis, he acknowledged he never felt excluded because of his sexuality. Instead, teammates treated him like any other rookie, making him carry team equipment and earn his spot on the team.

It was in his second preseason game where he said he felt part of the team. It was also the same game in which he sacked Cleveland Browns quarterback Johnny Manziel.

Although he had a legitimate shot at a roster spot, his time in St. Louis was limited to only the preseason as he was released in the final round of cuts before the start of the season.

He then bounced to the Dallas Cowboys’ practice squad, where he said teammates Tony Romo, Jason Witten and DeMarco Murray supported him throughout before he was waived.

Sam is currently a free agent, waiting to get a call from an NFL team. When asked what he thought his chances of playing in the league are, he said he did not know, and is open to playing professionally in the Canadian Football League.

Before his talk ended, Sam offered some final words of encouragement.

“If you think you might be alone, someone might disown you, you might not have friends or people are trying to bully you, I say don’t be afraid.” Sam remarked. “… Together we will change the world for the better, for each one of us.”

A version of this article appeared on page 11 of May 7, 2015’s print edition of the Daily Nexus.