The Daily Nexus
Science & Tech
Michael Pollan: Sustainable Living for Personal and Environmental Health
May 7, 2015 at 6:00 am by Kendra Witt 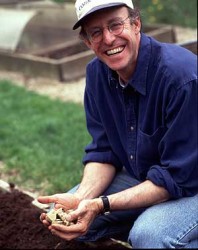 Pollan is well-known for his critiques on the disconnect between natural farming cycles and the food industry caused by modern agribusiness.

Last week, UCSB students and Santa Barbara residents joined in conversation with Michael Pollan, one of the leading voices on the relationship between food and western society, at the Granada Theater on Thursday April 30 as part of the UCSB Arts & Lectures series. There, he discussed the importance of sustainable living for personal and environmental health.

Pollan, an award-winning author, long time contributor to The New York Times Magazine, John S. and James L. Knight professor of journalism professor at UC Berkeley, and the director of the Knight Program in science and environmental journalism, was in conversation with Dr. Kurt Ransohoff and Dr. Frederic Kass of Sansum Clinic on topics ranging from Pollan’s “food rules” for healthy, economic and informed eating, to the magic of baking bread. Ransohoff is the CEO and Chief Medical Officer at Sansum Clinic, and Dr. Kass is Wellness Director of the Cancer Center of Santa Barbara in association with Sansum Clinic.

According to Pollan, his work has focused on man’s relationship with food — how we have changed our food and how these changes have in turn affected us. His goal is to restore intention in the way people eat.

“My whole project, as long as I’ve been writing about food, has not been recommending a specific way to go or trying to program people’s decisions but just make them more conscious of their eating decisions and the implications that those very common three-times-a-day decisions have on, not just your health, but the health of the planet,” Pollan said. “It’s a responsibility to think about, but it’s also incredibly satisfying.”

Pollan’s book, In Defense of Food: An Eater’s Manifesto, boils down to a prescription of three short sentences: “Eat food. Not too much. Mostly plants.”

Pollan described “food” as derived from the three primary sources of plants, animals and fungi, not the versions of these original food groups created after industrial processing.

“The big problem is that we haven’t left well enough alone — we’ve felt that food as it came out of the earth wasn’t good enough so we had to figure out ways to make it last forever,” Pollan said. “When the raw ingredients are this cheap, the only way you can make money is by processing them more and more, creating all this novelty. You end up with things no one ever asked for.”

Despite Pollan’s dissent on modern food practices, he concedes that cooking is one area where human processing has had positive effects.

“We learned how to ferment things, we learned how to cook them — to apply heat and transform them that way, and for most of history, all of those technologies actually made food less perishable, safer to eat and more delicious,” Pollan said. “At a certain point, we turned a corner, and food processing was no longer serving those interests.”

Recent research has suggested that antibiotic resistant bugs generated from trace antibiotics in widely consumed meat could be linked to obesity, Pollan continued.

“In the same way that low levels of antibiotics make animals fat, they may be contributing to our obesity problems. There’s serious research suggesting that may be an important factor in the obesity epidemic which coincides with this widespread use of antibiotics,” Pollan said.

Overall American expenditures on food have dropped by half while money spent on healthcare has risen, suggesting cheap food could be costing Americans their health.

“Cheap food is a wonderful thing, but it’s also a trap,” Pollan said. “The amount we spend on healthcare as a percentage of national income has gone from five percent to 18 percent. Wouldn’t you rather spend money on food than health care?”

The problem is circular, and the consequences of cheap, processed food aren’t manifested until much later.

“The real costs of cheap food are not recognized at the register and they are our health and they are our environmental problems and they are brutality the animals must suffer,” Pollan said. “The problem is how do you fix the food system and incorporate the real costs into that price without creating a huge problem for people who can’t afford to spend more on food?”

Pollan said that many of the changes that need to be made to the food system — removing antibiotics from food, reducing subsidies of unhealthy food, changing the intensive system of animal agriculture — would all result in an increase in food prices that would have to be matched by a rise in wages for food workers.

“We can’t fix food without fixing the larger issues,” Pollan said. “We need to pay a living wage to the people who are feeding us.”

In the meantime, eating economically is a matter of having the time and skills to cook.

“If you have the skills to cook simple food and the time to do it, you can eat very economically even if you’re poor,” said Pollan. “I really do think that cooking can solve all the money problems because cooking is economical, especially if you do it every day.”

Pollan suggested integrating cooking curriculum into the school system to teach future generations the importance of cooking and nutrition, while providing them with the skills to create healthy food on their own.

“I really think ultimately we’re going to have to treat lunch as an academic subject,” Pollan said. “These are really important skills and if you don’t have them, you are going to be dependent on the fast food industry and that’s going to hurt your health.”

Jenny Schatzle, founder of a diet and exercise program based in Santa Barbara, also emphasized the importance of teaching future generations about the contents of their food.

“I think the education of where food comes from and what we should be looking for is so important.”

In closing the discussion, Dr. Ransohoff concluded that awareness of healthy tactics to eating is critical to continued health.

“As members of the medical community, we have really dedicated our professional lives to trying to improve the health of both individuals and communities, and we know that nutrition is central to that role,” Ransohoff said. “I think just raising the awareness of healthy eating is really important. The huge obesity problem, I mean, that’s not going to be solved with a lecture. None of these kind of problems are going to be solved with a lecture, but I think it all helps.”