The Daily Nexus
On the Menu
Tropicana’s New Chef Brings the Housing Complex a Little Closer to Paradise
May 6, 2015 at 5:00 am by Marisa Ratchford 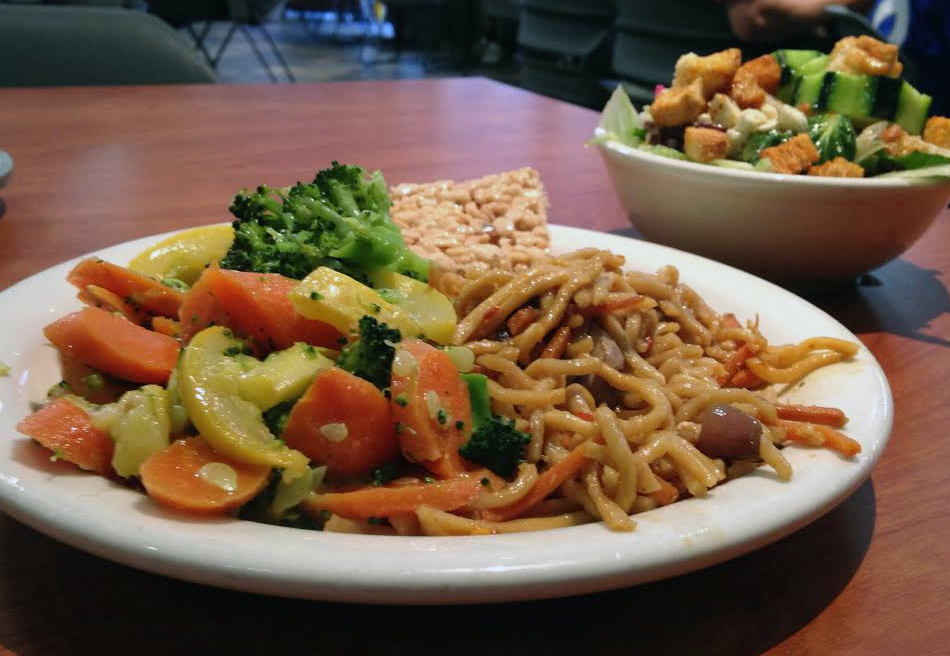 Tropicana residents and dorm food critics rejoice! The Tropicana café caterers, Bon Appétit, are planning some new changes to their menu. As a resident myself with restricted dietary needs to begin with — no meats allowed — I always felt a bit underwhelmed by the food of the past at Tropicana, which seemed lackluster and short in variety. But the hiring of a fresh new face, Roberto Espinoza, who brings new goals and styles, should hopefully create a dynamic and well-rounded staff set on providing meals that all the residents will enjoy.

Tropicana, with its several locations in Isla Vista, is home to a diverse selection of people: Athletes, transfer and international students, as well as members of the regular student population. With this many people, the taste and preferences of the diners can be hard to accomodate. However, it seems that the staff have taken a larger interest in the wants of the people. On Earth Day, Tropicana hosted a special eco-friendly menu that also included a meet-and-greet with the new chef, Roberto. He introduced himself and asked everyone to fill out a comment card about the food and their wishes for future meals. It seemed as if things were looking up for the dining experience at Trop.

When I sat down with Tina Ballue, the administrative supervisor, I asked her what Tropicana’s plans were for the café, and she told me that they plan on keeping fresher, healthier options on the menu and they hope to create a new environment with a lot more vegetarian options, which they acknowledge was something they struggled to provide this year. She also encouraged a more interactive relationship between staff and residents, by having them email suggestions for their favorite foods or dishes, which, according to Ballue, nine times out of ten they will be able to provide. “Our goal is to make a new dish every week,” she says.

So how is Tropicana implementing this new take on their menu? Well, they’ve had a great start by hiring Roberto Espinoza, previously executive chef at the late Elephant Bar, as the chef and manager for the café. Espinoza has worked as a chef and executive chef in many different fine dining restaurants where he specialized in creating healthy menus with organic ingredients in numerous styles of “international flare.” Espinoza gained a passion for cooking at an early age. “We had a garden with fresh seasonal herbs, vegetables and fruits and my mom would make healthy and delicious dishes, and that smell of a country meal really ignited my culinary inspiration.”

Espinoza has many hopes for Trop’s food scene: to implement a more fresh and varied menu than previous options available, to incorporate the favorite meals of all the students, to have everyone leave happy and satisfied and to introduce himself to the students so that they will reach out and send more suggestions via email about their favorite dishes and styles they prefer. “I’m always happy to listen to and develop new menu ideas,” he says. “I really enjoy working with great people.”

It has been several days since Bon Appétit implemented its new menu, and so far Espinoza seems to be meeting his promise. The food has varied, the options are fresh and there is way more flavor than before. Just the other evening, they had a delicious mushroom risotto that, previous to the changes in the kitchen, I would have most likely shied away from to a safer bet like a quesadilla. After trying the vegetarian rice dish, I noticed how well balanced it was between texture and flavor. The mushrooms were soft without being mushy, and the rice was divinely cooked, all coated in a cheesy flavor that just melted in your mouth and tied the whole dish together.

First-year and resident at Trop, Kayla Sisson, had always had an ongoing battle with the food selection provided. After Espinoza’s arrival, she has a verdict of her own and commented that lately she has noticed an improvement. “It seems like a better selection of vegetables, better desserts — everything seems a little fresher.”

And of course Kayla and I are not the only ones who have noticed the improvements. A general consensus from many of Tropicana residents, at least at the Del Norte location, agree things are looking up. The new changes are a much needed break from the common, lackluster and unoriginal dorm-food syndrome. The new direction for Bon Appétit and the hiring of fresh faces has certainly made an impact, but, of course, the improvements are a team effort and I would like to commend all the staff and administration responsible for the updated and revamped food provided to Tropicana residents. Your work is much appreciated by those of us dependent on you for a sense of a home-cooked meal in this hectic world known as Isla Vista.