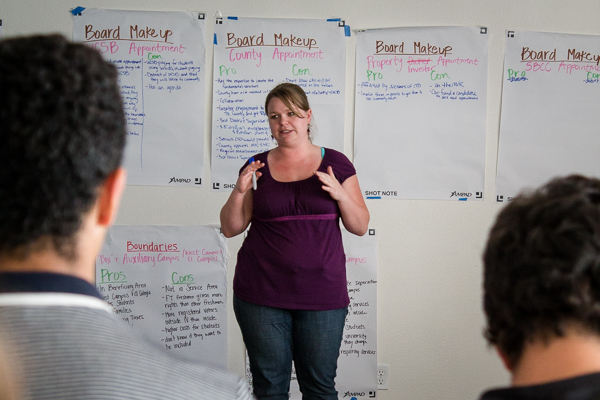 Discussions at previous meetings suggested one of the five elected board members should be appointed by UCSB and another by Santa Barbara County. Stakeholders also continued the discussion from previous weeks on how to set official boundaries for I.V. as a CSD and several attendees expressed preference for including UCSB buildings, such as university-owned apartments and residence halls, within the boundaries of the proposal.

Associated Students Senator and second-year history of public policy Paola Dela Cruz said setting a two-year term candidacy for board members would allow more students to run for a position on the board.

“Just looking at the students who have run for Park District, I think most of them are not first years,” Dela Cruz said.  “Generally it’s second years or third years so that by the time they graduate they have either two or three years on the board. Personally, I think having a two-year position makes it easier.”

A.S. Senator and third-year anthropology major Carlos Lopez said he agrees a two-year term would be suitable, and board members who wish to serve longer could run for consecutive terms.

“I would probably not run for something that was four years if I was only planning on staying in for two years,” Lopez said. “Couldn’t you just run again for re-election if you wanted to stay another two years?”

According to A.S. External Vice President of Local Affairs and fourth-year psychology major Cameron Schunk, the two-year position was suggested to address the concern that student board members lack dedication and knowledge.

“I think we’ve been pretty clear that the goal of that position is to avoid student transiency,” Schunk said. “Let’s address the elephant in the room: we’re worried students won’t be educated enough and informed enough to make decisions on the board.”

While Schunk said one potential way to develop board members’ experience would be to establish a year-long trial period, during which time their votes will not count towards decisions being made by the board, the proposal was voted down by attendees.

“I don’t know how this works as far as constitutionality or whether it’s legal,” Schunk said. “We could say you have a year where you can’t vote but you are still expected to show up because you are a member of the board.”

According to Schunk, including UCSB in the official boundaries of the proposed CSD would pressure the university to make a decision regarding their involvement in I.V. self-governance.

“I don’t want people who have not lived in Isla Vista to be making decisions about things that happen out here that they don’t have first-hand knowledge of yet,” Soutar said.

Because of time constraints, stakeholders made no decision concerning CSD boundaries and chose to continue the discussion at a later meeting.