The Daily Nexus
Spoken Word and Poetry
Poet Visits UCSB: Schultz On Writing and Witnessing The Wherewithal
April 28, 2015 at 7:41 pm by Jason Chun 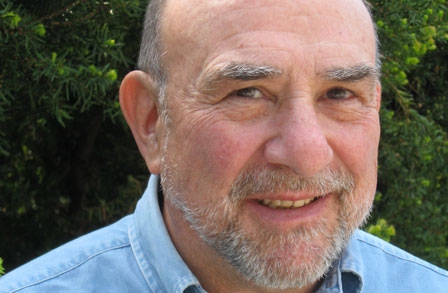 A tale of a young man translating the diaries of his mother – who saved seven Jews from the Nazis – all in the span of a single poem: this is The Wherewithal, the latest work by poet Philip Schultz, and the highlight of his reading on Tuesday, April 21. As guests arrived in Corwin Pavilion for the event, a certain tension filled the room. Perhaps the audience wasn’t sure what to expect. While poetry tends to come across as short and abstract, Schultz’s novel-in-verse was introduced as a piece that “blurs the boundary between poem and prose.”

The poet soon put his audience at ease. A calm man in a beige blazer with an affinity for smiling, Schultz overcame dyslexia to become a distinguished writer. He directs The Writers Studio, a New York City school he founded on the belief that anyone can be a poet or storyteller “when the desire to write is strong enough.” The literary veteran has published poetry for almost forty years.

Schultz won the Pulitzer Prize in 2008 for his poetry collection, Failure. From this volume he read for the UCSB audience the title poem, producing a stark image of an unfulfilled life. The narrator of “Failure” distinguishes between a “nobody,” the term for one who cannot be remembered, and a “failure,” the term he uses to classify his dead father. The father appears at times as a comical figure, falling asleep in movie theaters, until he ultimately succumbs to his fatigue.

Next, Schultz shared “Googling Ourselves.” He described the poem’s subject as a not uncommon phenomenon, but one with deeper implications. “It’s about you and it’s about other people with the same name,” said Schultz. His poem conveys the unnerving sense of reading about convicts or fallen officers who share his name. Is it possible, the poem ponders, that these strangers might imagine a poet with their name writing about people with their name?

Coming at last to The Wherewithal, Schultz revealed some parts of his creation process. The Wherewithal was originally planned to comprise ten to fifteen pages, but during the writing, it “became something else.” The work is fictional, but based on the true story of a heroic Catholic woman who witnessed and prevented tragedy during WWII. Henryk, her son and the poem’s narrator, works in a welfare office in 1960s San Francisco, a time and place where nonconformity is the norm and hippies rule the streets. In this hectic atmosphere, the unassuming worker still considers himself “somewhat interesting.” Henryk relates certain noteworthy events in his life, like the occasion when he as a teenager accidentally killed his friend in a game of chicken. In another job teaching English to soldiers, he breaks down when one of his students prompts the recollection of his dead friend.

Reading her diaries, Henryk discovers his mother was a devout Catholic whose faith gave her courage to defy the Nazis. Henryk’s mother criticizes her neighbors for their indifference to the atrocities against Jews. “Who didn’t know what was happening?” she wonders. Henryk likens the Nazis to the Zodiac, the notorious serial killer who terrorized San Francisco during the ‘60s. The Zodiac, says Henryk, named his prey and challenged the public perception of inhumane crimes – a contemporary Nazi. Looking at such parallels, and even extending the similarities to present day events, it is evident that history repeats, and that heroes like Henryk’s mother will always be necessary.

First-year English major Gabriel Kang lingered after the reading, perhaps hoping to have a word with Schultz. He had enjoyed reading The Wherewithal for his comparative literature class.  “[The Wherewithal] was illuminating, [even though] I’m not a fan of poetry,” Kang said.

Comparative literature professor Elisabeth Weber first met Schultz at a UCLA conference, and was largely responsible for bringing him to UCSB. Earlier that day, Schultz had spoken in her class, Poetics and Politics of Witnessing. Weber spoke highly of the poet’s talent and commented on The Wherewithal’s relationship to her class.

“The Wherewithal is, on the one hand, a poem of witnessing … the Holocaust, [and] also witnessing the indifference of society towards people who live in great poverty … [it] juxtaposes two of the deep indifferences to other people suffering,” Weber said.

Schultz’s reading stirred the too-often stagnant pool of thought. By its very nature as a novel-in-verse, The Wherewithal challenges common perception; and like any fine piece of writing, verse or prose, it compels its audience members to reimagine the world, to see the complexity concealed in their surroundings.