The Daily Nexus
Sports
Gauchos Break Out of Slump Against Hawaii
April 27, 2015 at 5:02 am by Martin Cobos 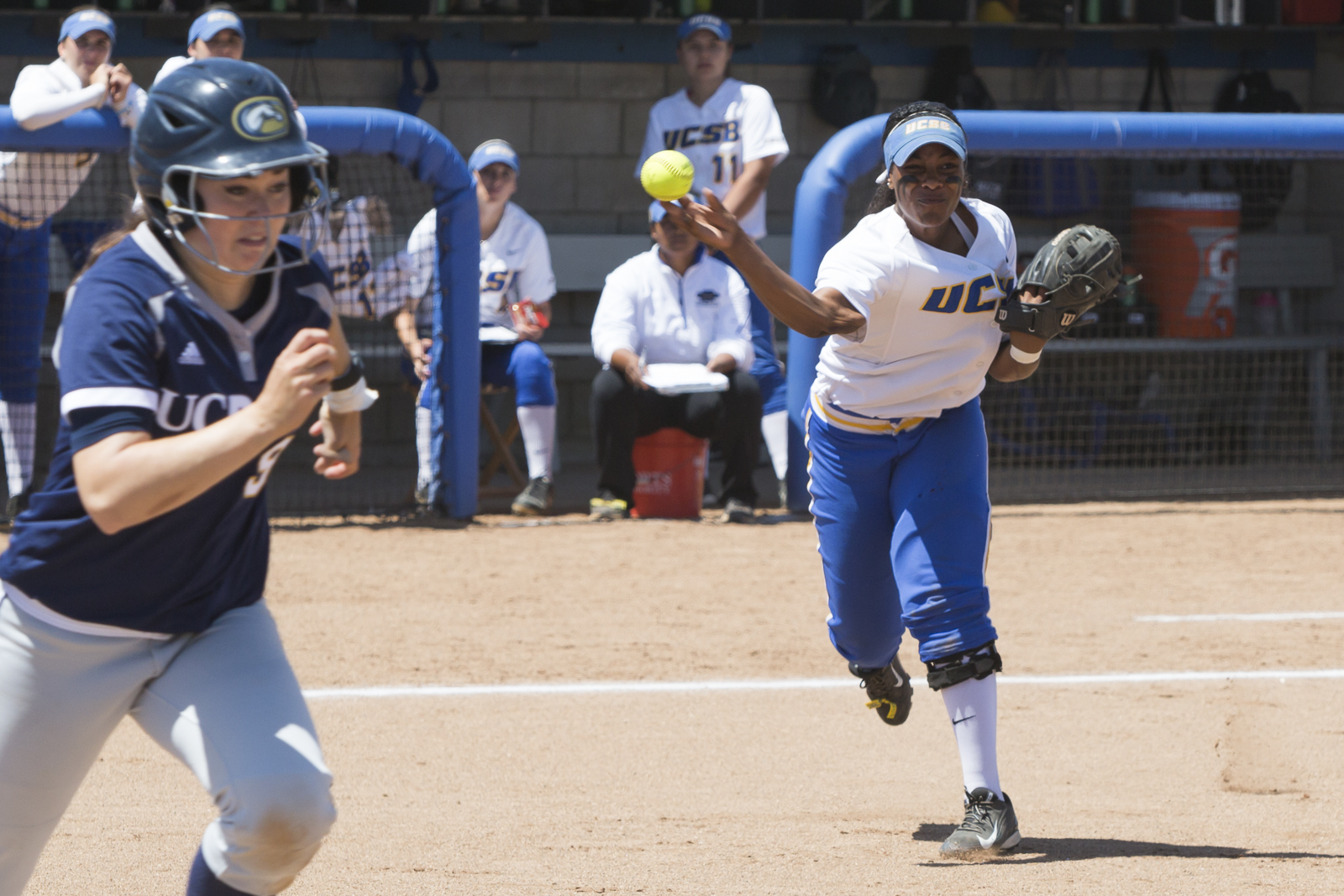 Attempting to beat the runner, DeJanee Moore hurls the ball to first base. Dustin Harris/Daily Nexus

The UCSB softball team took two of three from Hawaii this weekend. The Gauchos lost 3-2 in Friday’s series opener. However, the team swept Saturday’s double-header, winning 5-3 and 5-1.

Following the weekend, the Gauchos stand at 17-31 overall with a 4-11 conference record. Hawaii now holds an overall record of 27-21 and is 8-7 in conference play.

“We continue to keep in mind that we are a very good team and have the potential to beat anybody in our conference,” sophomore outfielder Jacqueline Hinojosa said. “We have confidence in ourselves and our abilities.”

Situational hitting was the main focus for UCSB coming into this weekend and it surely improved, getting 12 runs across the board this weekend.

Saturday’s final game gave the Gauchos their first back-to-back win since March and the team was in near perfect form. UCSB fell behind early after sophomore first baseman Heather Morales hit an RBI single to left field.

However, it was all Gauchos after this, holding Hawaii scoreless in the next four innings. Junior catcher MeShalon Moore got the scoring started in a big way for UCSB as she blasted a grand slam in the top of the fifth.

Moore hit an RBI single in the top of the seventh to cap off her five RBI day and gave the Gauchos a four run lead. Sophomore infielder Kristen Clark also had a great day at the plate, going 4-4 and scoring two runs.

UCSB roared back in the top of the sixth, putting up five runs. Senior Shelby Wisdom started the scoring with a solo home run. After a couple errors from Hawaii, Hinojosa would hit an RBI single and Moore would hit an RBI sacrifice fly to cap off the big inning.

“The key was just to swing at strikes,” Hinojosa said. “You must make an adjustment every at-bat and not worry too much about the umpire’s call.”

Friday’s series opener saw Hawaii jump out to a 3-0 lead through the first six innings of play. The Gauchos scored two in the top of the seventh after Hinojosa hit an RBI single and Moore walked to bring a run in.

However, it would be too little too late as the Gauchos were shut down just one batter later. Ludlow took the loss for UCSB after giving up two earned runs through six innings pitched. Hitchcock earned her sixth win of the season after allowing two runs through 6.1 innings.

UCSB will host UC Riverside for a three game series starting this Saturday at 12 PM.