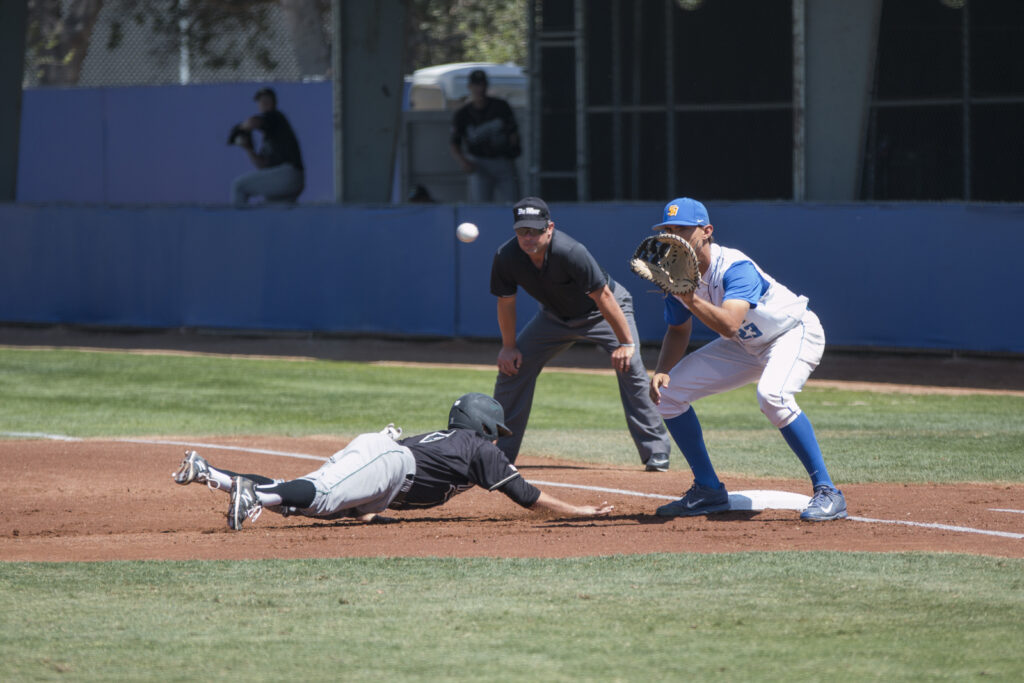 An opposing player attempts to slide into first as Robby Nesovic prepares to get him out. Stephen Manga/Daily Nexus

The UCSB baseball team maintains its undefeated midweek record with an 8-3 win over Pepperdine yesterday. With the win, the Gauchos record a sweep over Pepperdine this season.

The Gauchos will go into their away series against Hawaii this weekend with a 6-3 Big West and 29-9 overall record. Pepperdine finished the game with a 22-20 overall record.

“We had 14 hits today so I feel like we’re really swinging well,” redshirt senior outfielder Luke Swenson said. “It really helped going out early and getting those early runs in today.”

The UCSB offense put up 14 hits for their eight runs, including back-to-back homers. In the bottom of the sixth, redshirt sophomore catcher Paddy O’Brien smacked a long two-run homer to left center, only to be followed by freshman designated hitter Austin Bush and his one-run home run to far right.

“They did a good job today, we had a few fill-in guys hit some over the fence and we haven’t had a lot of that,” Head Coach Andrew Checketts said. “We had a couple homers, and that was really nice to see.”

A change in the usual pitching staff occurred in yesterday’s game, as three of the four pitchers who appeared were freshmen because Tuesday’s usual starter, junior lefty Domenic Mazza, started on the mound Sunday.

“I think [the freshmen] pitched well,” Swenson said. “They really went for the batters and that is all you can ask for.”

With the Tuesday slot open, freshman Chris Clements appeared in his first Gaucho appearance as he opened on the mound for UCSB against the Waves. Clements pitched through 4.1 innings and allowed four hits for two runs. Freshman Kyle Nelson entered the game as a middle reliever and allowed only one hit in three innings pitched. Freshman Alex Garcia also made an appearance, recording two outs before turning it over to junior righty Connor Bates to close the game.

“They gave us a chance to do our job, and they threw strikes. It wasn’t perfect, but they did throw strikes,” Checketts said. “Nelson pitched well. He was fantastic, and he’s been good for us. I think Garcia is going to be better than that down the line.”

“It feels good to be out there [at first], my body is always a little bit more loose out there than when I’m designated hitting,” Nesovic said. “I’m feeling comfortable [at- bat], and seeing the ball well. I’m just letting the ball travel.”

The Gauchos will see Big West action this weekend in a three-game series against Hawaii starting on Friday and concluding Sunday.