The Daily Nexus
Volleyball
No. 9 UCSB Knocks No. 14 Stanford Out of Postseason Contention
April 20, 2015 at 5:08 am by Edward Moss 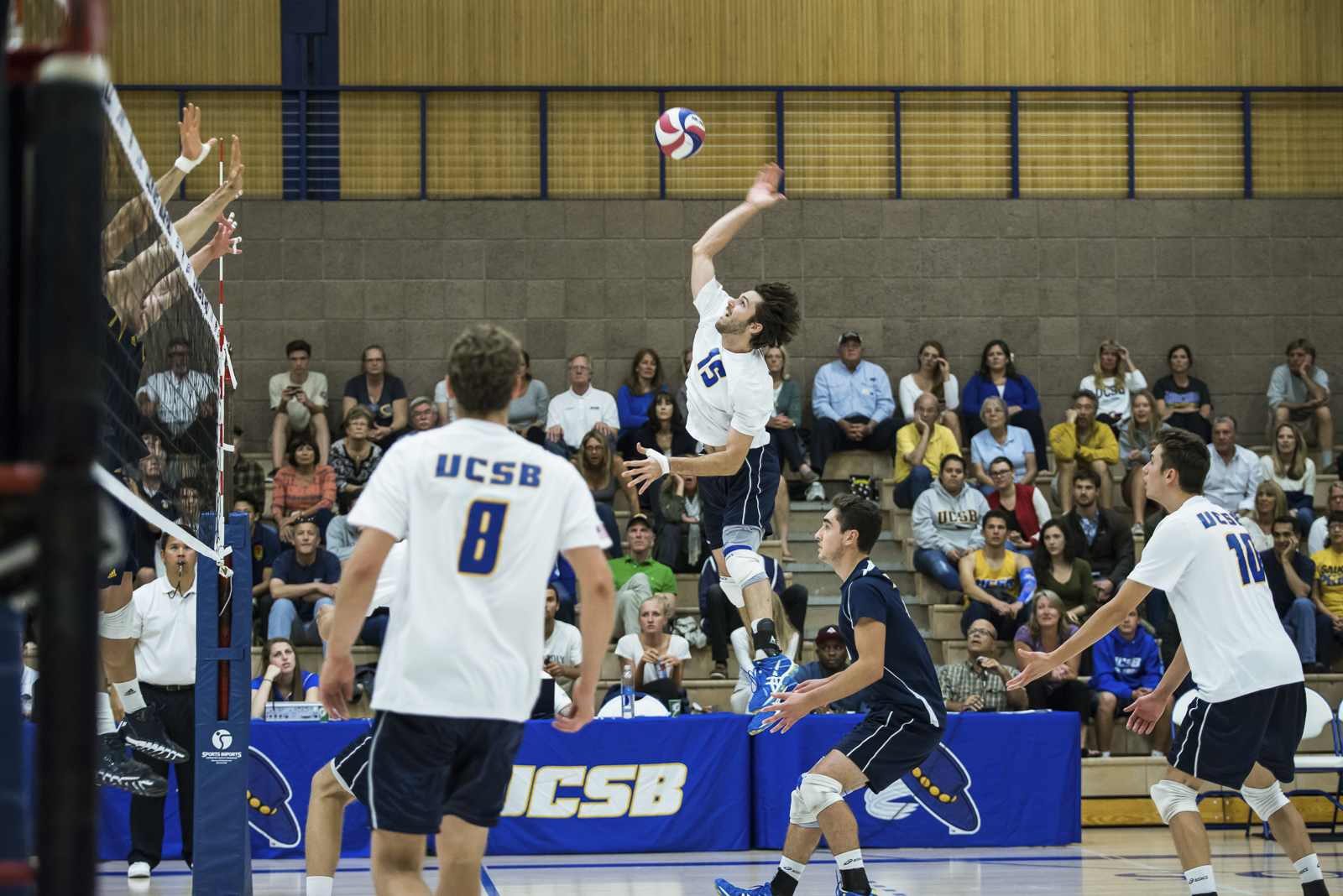 Kevin Donohue swings an opposite hit just over the block. Eric Swenson/Daily Nexus

Everything was clicking for the Gauchos’ offense on Saturday as the No. 9 UCSB men’s volleyball team dismantled No. 14 Stanford in three sets 25-17, 25-18, 25-14. The match ended UCSB’s regular season schedule as it looks towards next weekend’s MPSF quarterfinal matchup against No. 3 Pepperdine.

​Santa Barbara ended the regular season with a 17-9 record, going 13-9 in MPSF matches. The win left the team in the No. 6 spot going into the MPSF playoffs. The loss put Stanford’s record at 10-18, 7-15 in MPSF play, meaning the Cardinals will miss the playoffs by one spot in the standings one year after losing in the NCAA final.

“The team was passing really well last night. The passers made my job extremely easy,” junior setter Jonah Seif said. “It made it difficult for the opposing blockers to set up and our hitters did a great job. We played a really strong match overall last night.”

Filling in for senior outside hitter Weston Nielson, who did not dress because of the flu, junior outside hitter Spencer Buckley added seven kills. “Buck’s” versatility has been huge for the Gauchos down the stretch, as he has consistently come off the bench and done a great job in a starting role.

Seif recorded his fourth straight double-double with 32 assists and 10 digs, as well as four block assists. All around, it was a great performance from the Gauchos from start to finish.

​“Everyone was in synch with Jonah,” Donohue said. “We caught a rhythm at the beginning of the match and it continued throughout all three sets.”

​Stanford didn’t have much of a chance against Santa Barbara, as the Gauchos put up an intimidating block at the net all night. Senior middle blocker Jake Staahl led the team with eight block assists and junior middle blocker Ryan Hardy added five. Overall, UCSB had 14 blocks to Stanford’s four, and the Cardinals were only able to muster a .088 hitting percentage in the match.

​UCSB finished the season sixth in MPSF standings after No. 6 BYU defeated No. 1 Hawaii in two matches this weekend. The Gauchos will travel to Malibu this Saturday to take on Pepperdine, a team they defeated in four sets this past week.

​“We’re gonna push ourselves this week,” Donohue said. “It’s gonna be a solid week and we’re confident that we can go into their gym and replicate the way we played last week and that we’ll come out with the win.”

​After having been ranked No. 3 in the nation at the beginning of the season, UCSB lost a few matches early in the season that the team believes it should have won. Since those losses, the Gauchos have been fighting back to get the highest playoff spot they could earn. Santa Barbara has a lot of confidence going into its rematch with Pepperdine, even though the team knows the Waves will be hungry to defend their own court after losing on their senior night.

“We’ve been in a playoff mentality the last few weeks,” Seif said. “We did what we needed to do this week with our two wins. The climb continues for us; we have guys who have been to the playoffs before and we’re confident going into this week.”

After a week of practice, UCSB takes on Pepperdine on Saturday in Malibu at 7:00 p.m.