The Daily Nexus
Tennis
From Homeschool to Beach School
April 16, 2015 at 5:10 am by Evander Hilton 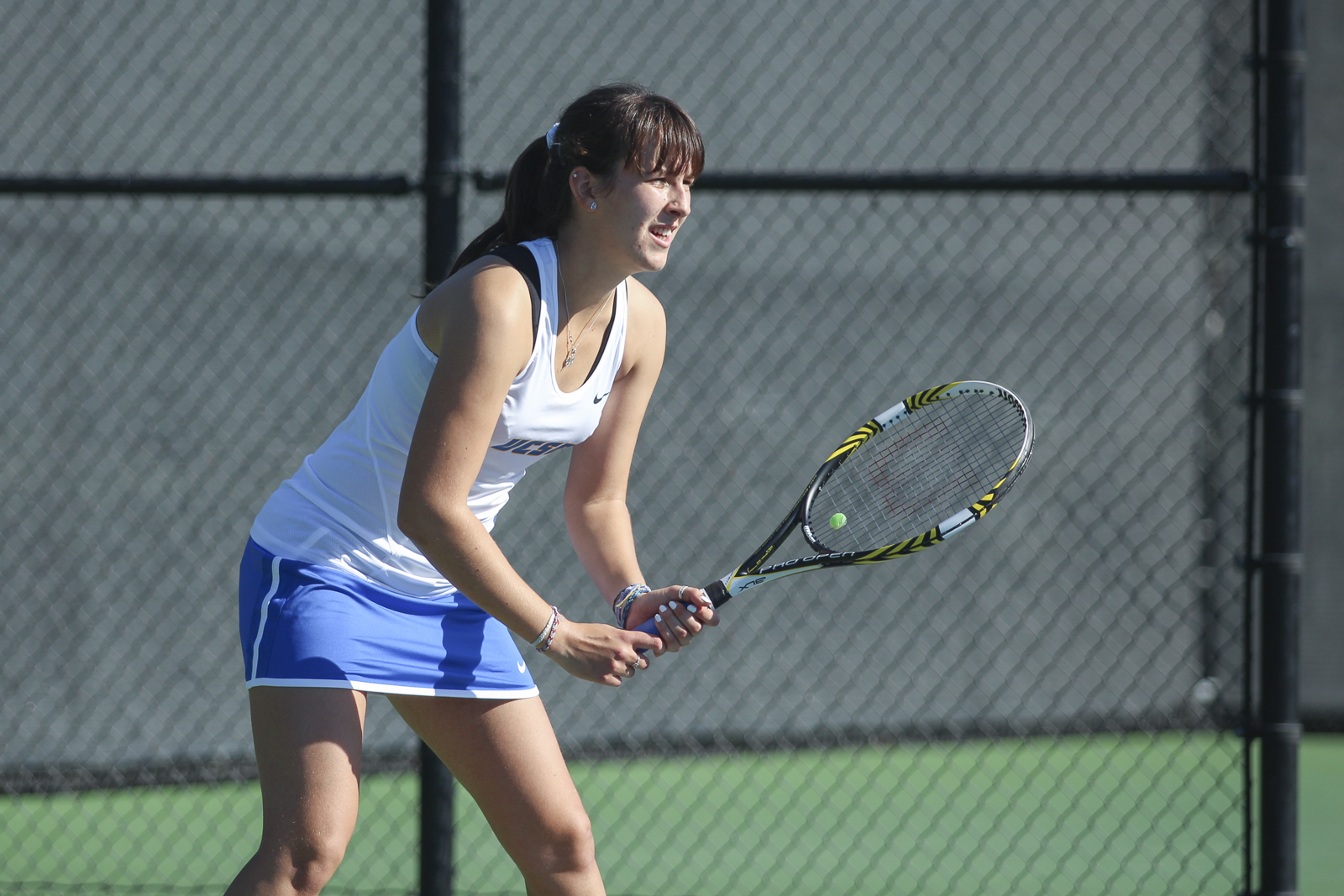 For student athletes, knowing what the best path to take in order to play professionally is almost never clear. Yet, it can be very difficult to pursue a high level of education while simultaneously putting in hour after hour honing your skills on the court, especially outside of the United States.

This was the dilemma for freshman Lou Adler of the UCSB women’s tennis team, who wanted to pursue her educational ambitions alongside her other dream of playing tennis professionally. Adler comes from Vaucresson, France, a commune in the western suburbs of Paris. After middle school, Adler made the switch to alternative schooling, which allowed her to practice tennis in the afternoon after a morning session at school.

In 2014, Adler began playing in the ITF tournaments, competing in countries like Denmark, Turkey, Greece, Belgium, Israel, Egypt and Italy. In order to make this possible, she enrolled in a homeschooling program, changing her form of education once again in order to accommodate the progress she was making as a tennis player.

“Actually it was a tough year because I did one year of university [schooling] back at France,” Adler said. “Doing both and traveling on my own and training on my own, it was hard, and that’s probably why I decided to come here because it’s the only place in the world that you can do both.”

Deciding to play tennis at UCSB was certainly no easy decision for Adler. While coming to the U.S. to play did afford her the opportunity to play tennis while going to school, she still had to deal with a language barrier, as well as the typical problems that plague first-year college students.

Going to college after being homeschooled for most of high school is never an easy jump, but luckily it was not one Adler had to make alone. Her teammate and fellow incoming freshman Sharona Levinson also spent her high school years being homeschooled, allowing her to spend more time playing tennis.

“I think she came here focusing on academics, not trying to be the typical college girl,” Levinson said. “She became closer and closer with us, and fit really well together with the team.”

All the difficulty of acclimating to a Division I collegiate atmosphere was made more complicated by the fact that Adler didn’t begin the year in Santa Barbara. Coming into the team after winter break was tough for her because it meant that the rest of the team had already trained together for a whole quarter, becoming closer as a unit in the process.

As time passed, Adler’s English got better, making it easier for her to communicate with her teammates. The seniors did their part to make her feel comfortable, inviting her to hang out after practices for team bonding.

After some time, Adler began to become more and more a part of the team, letting go of the individual nature of tennis she learned in France and giving way for the team dynamic of collegiate tennis.

“We talked to her more and she was so nice, we just loved her automatically,” Levinson said. “She’s probably the most mature [person] on the team. She’s like the mom. I feel like she’s one of the few girls on the team I can go to and tell her anything.”

Before her first match Adler was nothing short on nerves, feeling the pressure of her first match competing for UCSB. Many differences between the playing in America rather than France were not told to her, but discovered as she played through her match.

“Usually tennis is quiet. At the first home match, all the guys from the tennis team were there cheering for us,” Adler said. “It was great, but I was really nervous. I’m not used to playing in front of many people. It’s really good for my confidence; they help me, my coach and teammates.”

If it wasn’t hard enough for Adler to come into the season a quarter late — having to get used to the rigors of college and all the changes it has on daily life, not to mention the culture shock of being in the U.S. — an injury early in her season would make things even more arduous.

During a training session with the team working with medicine balls, Adler took a step with her right foot only to feel a pang of extreme discomfort. It was later discovered that she had broken the third metatarsal in her right foot, possibly keeping her from playing out the remainder of her season.

“It’s been a rough journey for her,” Assistant Coach Erica Cano said. “But, she’s finally getting better and hopes to play in the conference championships at the end of April.”

Most recently, Adler returned to the team, playing a part in the 7-0 sweep of UC Riverside, pairing up with freshman Natalie Da Silveira on the No. 3 court in their 8-2 win. Adler’s return to action could not have come at a better time, with the Gauchos’ last conference match against rivals Cal Poly coming up this Saturday, before the Big West Tournament the week after.

“Being out these eight weeks has been kind of the longest absence of tennis of her life,” Cano said. “When she returns, she will resume playing at the No. 1 spot.”

A version of this article appeared on page 13 of April 16, 2015’s print edition of the Daily Nexus.