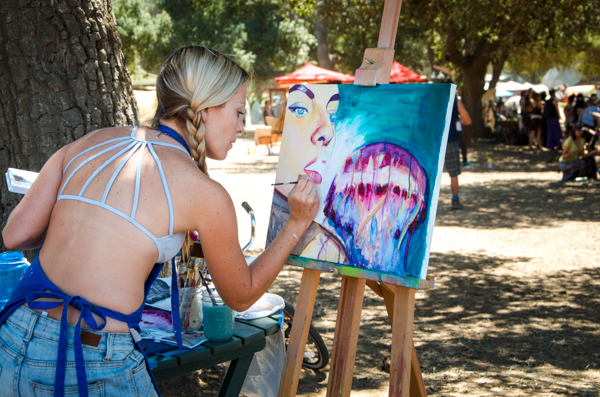 Held in Santa Barbara’s own backyard within the Santa Ynez mountains, Lucidity invited attendees to bask in a whirlwind of the sickest of fine art, the dopest of musical talent and the most stimulating of multi-sensory experiences. With a commitment to sustainability, environmental responsibility, community reciprocity and personal growth, Lucidity offered participants an opportunity to creatively and artistically co-create the open-source, transformational arts and music festival of their dreams.

The first night of the festival, Berkeley-based electronic producer Thriftworks headlined the main stage with explosive, beat-crafting modern bass and eclectic synth samples along to a Technicolor laser lightshow unparalleled by many other concert lightshows on the West Coast. Concurrently, the world instrument/beat duo Dirtwire mesmerized audiences with sultry, traditional world music and roots tunes, sporting a myriad of instruments like the kalimba, the sitar and other obscure, mostly Middle Eastern instruments.

According to Lucidity Co-Founder and Marketing Director Jonah Haas, along with showcasing musical stages, themed camping villages, sustainable and organic local food stands, a curated art gallery and workshops, Lucidity this year was all about community and education.

Indeed, a particularly notable facet of the festival had everything to do with the music. Headliner and glitch hop DJ the Polish Ambassador, a musician who also happens to be spearheading a nationwide sustainability education program called “Pushing Through The Pavement Tour,” has been traveling the nation introducing communities to permaculture design processes. The workshops include introductions to rainwater harvesting, natural building, regenerative techniques, permaculture gardening, composting, ecological principles and more.

According to Rising, Lucidity Permaculture Action Hub staff would start teaching workshops in the morning for the first couple hours of the festival with children’s education and youth permaculture education, and then would move on to DIY skill-shares, as well as “more hands-on stuff” such as making botanical medicine, lessons on how to make kombuchas, fermented sodas and even environmentally-friendly soaps and deodorants.

“Today we’re going to have an introduction to permaculture, a soils and compost workshop, followed by rain-water harvesting techniques,” Rising said, prepping for a long day of teaching while under a multi-colored cloth awning at the festival. “There’s a rewilding workshop, and a social permaculture panel discussion later on. At night we end everything off with a mycelial mixer, a networking party for permaculture folks.”

Lucidity’s penchant toward substantive, forward-thinking sustainability is no secret, as big-time publications have begun to turn their eyes and ears toward the festival’s progressive efforts.

“The feedback has been really amazing,” Rising said. “We got into the Huffington Post for the permaculture action course.”

These efforts coincide with Lucidity’s recent decision to reduce attendees after Santa Barbara County asked the organization to reduce their overall capacity numbers due to concerns about the festival’s ecological impact, including the Santa Ynez Valley’s drought cycle as well as the impact of parking by cars on top of oak tree roots.

“The biggest challenge has been reducing our car camping option. Last year we had 1100 cars up onsite. This year, it’s looking like we will have less than 500,” Haas said. “Making this sort of reduction when people have come to expect certain things is difficult. But we look forward to there being more space onsite and less crowding.”

It is this very dedication to “Leaving It Better” that makes Lucidity a gratifyingly unique experience, leaving festival-goers with a sense of social responsibility along with memories many may not remember, with people they’ll never forget.

“One of the things that horrified me the one time I went to Coachella was how everyone just threw their trash all over the grounds. I have the image of tractors piling up mountains of single-use plastic bottles when they turned the lights on at night,” Haas said. “Lucidity endeavors to be as sustainable and environmentally responsible as possible. We have a variety of initiatives that reduce our footprint and extend a deeper respect for the land.” 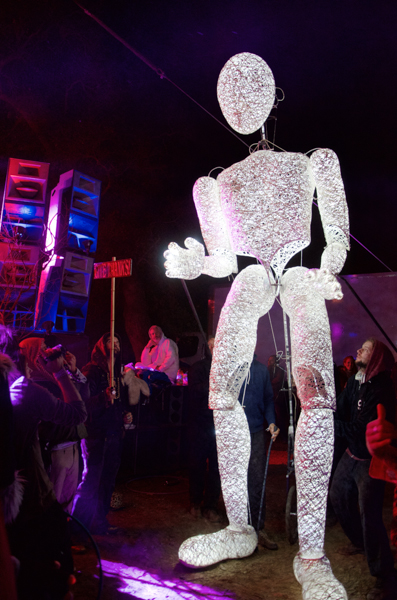