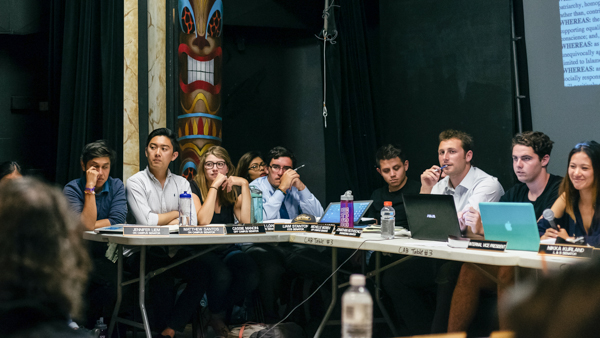 The Associated Students Senate voted against Students for Justice in Palestine’s resolution to divest from companies profiting from human rights violations in Israel-Palestine by a tiebreaker secret ballot of 13-12-1 after a lengthy eight-hour meeting last night in the Old Little Theater and Givertz 1004.

Fourth-year economics and accounting major and A.S. Internal Vice President Angela Lau took the votes on the resolution by secret ballot and gave the tie-breaking “no” vote following the Senate’s initial 12-12 split and one abstention over whether or not to pass the resolution. The failure of the resolution to pass marks the third consecutive year the A.S. Senate has denied passage of a divestment resolution. UCSB and UC Merced remain the only UC campuses whose undergraduate student governments have not passed divestment resolutions, with UC Irvine being the first campus to pass divestment in Nov. 2012.

Second-year sociology major and SJP member Anumita Kaur co-authored the resolution which calls for the UC Regents, UCSB, Associated Students and the UCSB Foundation to withdraw investments from several companies allegedly profiting from human rights violations in Israel-Palestine. The resolution specifically names Motorola, Raytheon, Northrop-Grumman, Caterpillar, Boeing, General Electric and Hewlett-Packard as companies infringing on citizenship rights of those in the region.

Jeremy Garza, second-year Ph.D candidate in the department of sociology and SJP member, said the organization is disappointed with the outcome of the Senate’s vote.

“We are frustrated that our Associated Students will go another year being complicit with these human rights violations perpetrated by these companies, but we are also as motivated as ever because … in the way the debate has changed the past few years, we feel that it’s only a matter of time … a global movement like this can’t be stopped by the vote of a handful of A.S. senators,” Garza said.

Second-year CCS physics major and CCS collegiate senator Liam Stanton, who called for a roll call vote prior to the motion to vote on the resolution, said the secret vote forced Lau to take responsibility for the consequences of the vote.

“What makes me upset about the result of tonight’s vote wasn’t which side won or lost,” Stanton said. “It was the fact that we didn’t have the courage as public representatives to put our votes out there.”

Stanton said the tie vote and resulting tiebreaker decided by Lau created an unfortunate situation in which Lau will “almost singularly” receive blame for the decision.

“I don’t think either side behaved particularly well,” Stanton said. “We instead forced the president of our Senate to put out her vote. She was the only public vote and so all of us got to hide, except for those who announced their vote. She had to take the heat almost singularly for everyone else from the community who feels marginalized now.”

Second-year communication and political science double major and off-campus senator Hiro Bower said she called for a secret ballot because she believed it was necessary given the strongly opposing sides on the divestment movement.

According to Bower, situations like divestment increase pressure on A.S. Senators to carry out decisions as representatives of the totality of the student body.

“So in that case a lot of pressure is put on your shoulders and not everybody is comfortable with facing everybody there because you cannot make a decision without feeling horrible about it,” Bower said. “Yes, that’s like something we took on when we decided to run, we all knew that this was coming … but still, at the end of the day, we’re students.”

Off-campus Senator Michelle Moreh, one of the main senators in opposition to the resolution, said the Israeli West Bank barrier separating Israel and Palestine is necessary because of the ongoing threat of terrorism in Israel.

“No one is arguing that all Palestinians are terrorists, but how should Israel deal with terrorist organizations that are hiding themselves amongst civilians and using them as a cover to murder Israelis?” Moreh said. “In my opinion, one-sided security shouldn’t come at the expense of others. But this is happening because we have terrorist organizations that have left Israel with really no other way to keep its people safe. When terrorists put their weapons down and their hatred down, the wall comes down.”

“I cannot applaud the decision for the resolution to not acknowledge a two-state solution,” Rothschild said. “What is so wrong with acknowledging Israel’s right to exist?”

Third-year psychology major Guy Singer said he was against the resolution because it did not reflect any input from the Jewish community.

“We’ve worked for the past two years to build alternatives and to build roads of cooperation and making out investment system more socially, environmentally and governmentally more responsible, and these efforts have been met with nothing but disdain from the pro-BDS community,” Singer said. “Any divestment resolution in the future will have to incorporate the Jewish community in some way or another in order for it to work.”

Second-year film and media studies and philosophy double major and Off-campus Senator Jenna Anderson said she supported the resolution, but wanted to see amendments made.

“As you can see, most every senator has expressed concerns with the wording of this resolution,” Anderson said. “Maybe I’m an idealist, but I just don’t get why we can’t come together and fix certain parts of it just to make it a little bit more inclusive.”

Anderson said A.S. should look into changes such as including more numbers and looking into investments in other companies that might not be socially responsible.

Fourth-year feminist studies and history double major Proxy Senator Andrew Farkash said he supported the resolution as a way for the university to dissociate from a stance that favors one country over another.

“Our investments as they are right now value Israeli lives over Palestinian lives,” Farkash said. “I think that taking our money out of this issue makes a statement that we don’t support human rights violations, but at some point it is just saying we don’t want our hands involved whatsoever.”

According to Farkash, it was hard for him to come out as a Jewish student in support of the bill.

“It is difficult for me to sit here and say that I support this resolution, because I know and acknowledge and am so deeply connected to those histories,” Farkash said. “There are thousands of Jewish people like me who are coming out and saying we love our country, we love our ethnicity, we love our religion, but we don’t love the occupation.”