The Daily Nexus
On the Menu
Sushi Cafe Supplies Calories, but not Necessarily Smiles
April 10, 2015 at 5:00 am by Allison Wright 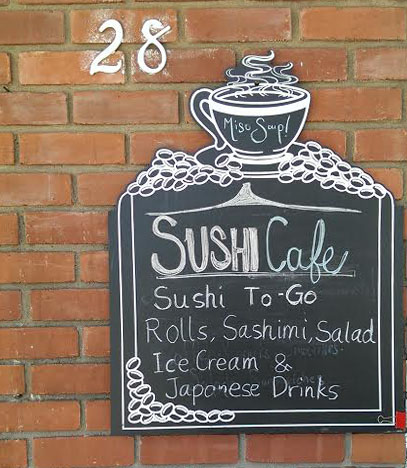 Someone once told me, “Always judge a sushi restaurant by its miso soup.” I always believed that to make an assessment at the first slurp was a little like substituting “sushi restaurant” and “miso soup” for “book” and “cover,” but I have to admit, restaurants with bad soup don’t typically shell out high quality soosh.

So while books get the benefit of looking past the cover, I start my judgment with a little bowl of miso soup, averaging three cubes of tofu, ranging from thin strips to wide rectangles of seaweed and never ceasing to delight my inner eight-year-old, who still revels in stirring the broth and resisting another sip until the sediment returns to the burnt-red bottom of the bowl.

This little lesson in restaurant reviewing stuck with me last Thursday when I hit State Street, fresh off a four-hour stint as a hot-shot intern. Not sure whether or not I could count lunch breaks towards logged hours, I suppressed my body’s cries for calories until my work was through, which left me formulating my order with every weakening step towards Sushi Cafe, a new shop-front in the Sushi Teri family.

Miso soup, of course, was a given. Contemplations of seaweed salad invoked an eager growl. But the thought of a sushi roll sent my stomach into an expectant frenzy. Tuna? Salmon? Am I hungry enough to add cream cheese just for the sake of calories? What about paying extra for real crab?

Still undecided as I rounded the corner of Figueroa Street, I deferred the decision until I walked through the doors. Situated outside of the propped-open double doors, an a-frame chalkboard boasted “fresh sushi to go,” and “1/2 off sushi after 2:30.” A smudge over the word fresh and the cafe’s seeming insistence to liquidate stock should have raised a concern or two, but I was, admittedly, approaching a level of hunger not far from chewing my leather shoes.

Featuring a ten-person seating area, a refrigerated case filled with bottled Coca-Cola and Ito En teas, pre-made sushi rolls, as well as a counter topped with a stack of soy-sauce bowls and a container stuffed with disposable chopsticks, Sushi Cafe’s interior leans toward modest. The only adornment for its one red-brick wall and other grey-painted cinderblock one is a pair of cloth banners — one featuring a subtle wave-like pattern and the other exclaiming “Sushi!” — that stretch in between.

Scanning for another chalkboard, lettered in quaint, loopy letters, typical of a walk-up-and-order restaurant like this, my eyes failed to locate a clearly visible menu until they settled back on the counter. I picked up a to-go menu (the type you might find magneted to a fridge in the background of a sitcom), which is the only one the two-day-old sushi monger currently offers.

Just like the cafe itself, Sushi Cafe’s menu honors the old value of simplicity. A few salads and appetizers (along with a couple outliers like a bento box and fish or eel with rice bowl) accompany the predominantly sushi-roll selection. Although they have 15 rolls available that average $7 to $8 each, the cafe doesn’t offer much in the way of extravagant specialty rolls. 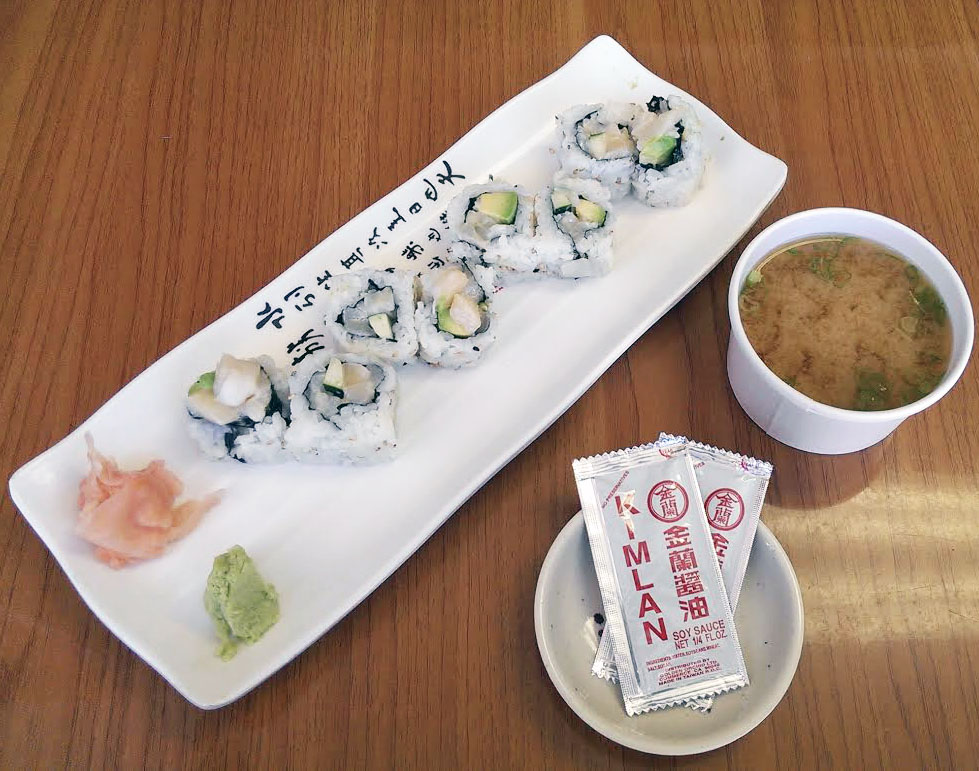 I opted for a miso soup and a scallops roll, which included cucumber and avocado. My bill added up to $8.46 ($2 for the soup and $6 for the roll), which led me back to the menu’s fine print. “All sushi rolls in to-go case are 1/2 off after 2:30.” Ordering fresh costs extra — or more aptly, costs the normal amount.

The miso soup came not in the imitation lacquerware bowl to be expected at Japanese restaurants but in a single-use to-go container despite my decision to eat in. I gave it a quick stir to satisfy the eight-year-old in me before ladling the broth and plethora of floating green onions onto my plastic spoon. Extra salty and heavy on the green onion garnish, this miso gave me good reason to reassess the nearby a-frame and its warning signs. Although it completely lacked any seaweed, the soup’s generous quantity of soft, gummable tofu had a nutty taste that actually came through the soup’s saltiness.

Snapping a set of to-go chopsticks, I moved on to the scallops roll. Visually pale, the roll nearly blended into the white plastic plateware, and each piece seemed unique in its proportion of ingredients, some completely lacking the promised avocado. Stray scallops littered the zig-zagged array of sushi slices, and an initial chopstick squeeze test revealed critical structural deficiencies; haphazardly assembled, this roll verged on completely falling apart.

With little hope remaining, I dug in anyway, trying the first bite sans soy sauce, wasabi or pickled ginger. The too-tough rice put up a bit of a struggle, and the seaweed boundary between outside and in proved difficult, too. By the time I reached the roll’s interior, I found a slightly “fish-smell” taste and scallops far from “melt in your mouth.” Still severely calorie deficient and recalling the smudged “fresh,” I slathered on the wasabi and used the foil-pouch soy sauce generously.

Although far from deemable of high praise, Sushi Cafe need not be totally avoided. Their selection of pre-portioned Japanese ice creams is actually a nice touch, as is their free Wi-Fi. And for beverage snobs, bottled Coke can be a rare treat. So for those rushing from one responsibility to another, for those who are down for sushi in black-bottom, clear-top plastic clamshells reminiscent of a grocery store’s, for those looking for discount or for those hungry enough to scrape gum off of a bus-station bench just for the sake of chewing something, Sushi Cafe is convenient, cheap and okay enough to stop in.