The Daily Nexus
News
Brooks Discusses Death, Careers at Campbell
April 9, 2015 at 5:00 am by Josh Ortiz 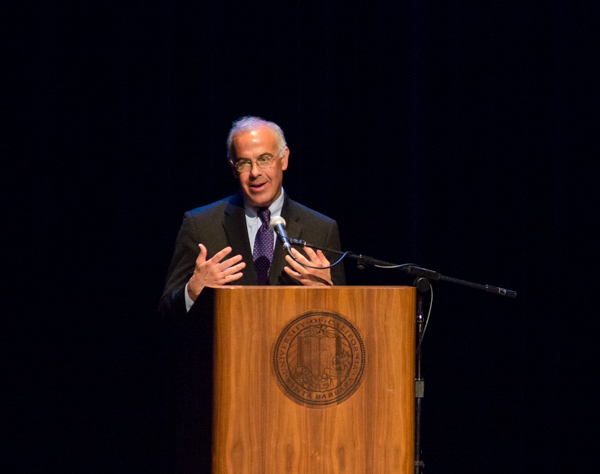 Brooks lectured at Campbell Hall on the status of virtue within our society, drawing a comparison between virtues important on a résumé versus those one might consider when writing a eulogy. Hari Patel/Daily Nexus

Hosted by Arts & Lectures, Brooks’ talk discussed the phenomenon in which individuals seek virtue amidst the “moral mediocrity” of today’s society and explored how some people are able to be virtuous despite cultural conflicts within their surrounding environment. Brooks has been featured on ”PBS News Hour” and “All Things Considered” on NPR and has written several best-selling books.

Brooks went on to say résumé virtues and eulogy virtues are in tension with each other, causing individuals who pursue good résumés to lose their ability to have a good eulogy.

“[If you pursue résumé virtue] you turn into a shroud animal. You lack inner depth. You forget how to speak with a moral vocabulary. You live as an unconscious organism not really attached to the highest ideals, and you settle for a moral mediocrity,” Brooks said. “You’re not deserving of the eulogy you want, which only comes from an unfakeable virtue.”

According to Brooks, people can overcome “moral mediocrity” by first confronting themselves and weighing their values on morals that he alleged have become less common in today’s culture.

“To have that inner happiness, or even approach it, you have to step outside the ‘big me’ culture and you have to step back into a different moral collage, which used to be more common than now and which is based on a profound honesty about yourself,” Brooks said. “Character is built over the course of this confrontation with yourself.”

Brooks also said stepping toward “inner happiness” comes from receiving help from others, rather than searching for self-help.

“Character is not inside — no one is really strong enough to defeat selfishness or defeat self-obsession,” Brooks said. “We all need help from outside.”

According to Brooks, pursuing virtue by self-confrontation and help from others makes it possible to escape the stresses and conflicts of a life of moral mediocrity.
“It is possible to go from scattered life to a really good life,” Brooks said.

First-year actuarial science major Leslie Medina said she was surprised that Brooks spoke on virtue, despite his reputation as a prominent political pundit.
“I feel like his talk was a little wishy-washy,” Medina said. “I wasn’t expecting what it came out to be.”

Medina said she was glad she was able to attend Brooks’ lecture because he made profound points on the moral structure of modern culture.

“I’m still glad I went because he had a lot of important things to say about society,” Medina said. “It left me with a lot to think about.”

“I think he’s right in saying that people today just aren’t all that moral,” Kelleher said. “Virtue is something that everyone, especially college students, needs to keep in mind.”

A version of this story appeared on page 8 of the Thursday, April 9 print issue of the Daily Nexus.